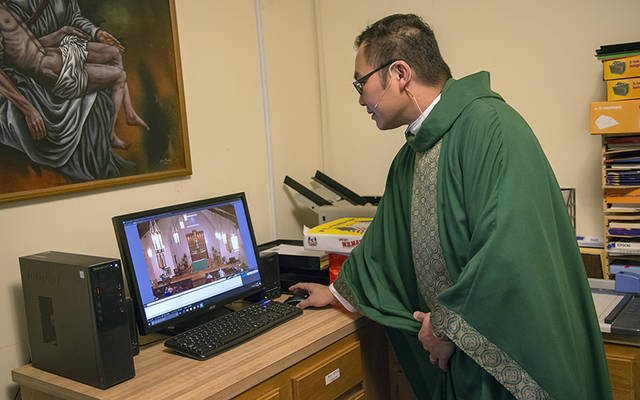 At first glance, those two groups may appear to have little in common, but each represents a population that can be challenging for Catholic parishes to reach and engage. St. Patrick Parish in Victor, however, may have found a way to do just that.

Over the summer the parish began live streaming its Masses, using a camera installed in the church to transmit live video coverage over the Internet. Viewers who visit the parish’s YouTube channel at https://www.youtube.com/channel/UCTEAkPqTNzOatKZyVdf61sw are able to either watch Masses in real time or watch previously recorded Masses.

Those who are physically able to do so are obligated to attend Mass, and watching it over the Internet does not fulfill that obligation, noted Father Edison Tayag, pastor. Nonetheless, the coverage of these Masses has the potential to be appealing to people of all ages, especially to homebound senior citizens and young adults, according to Mark Hamilton, a longtime St. Patrick parishioner. Hamilton and fellow parishioner Ted Shawe helped Father Tayag get the live stream up and running.

“I think Father Edison is doing a very nice job of trying to meet the needs of an aging population, and with the millennials being more tech-savvy and wanting these things, I think (the live streaming) helps support the congregation in those areas too,” he said.

Hamilton said he didn’t realize just how valuable the live stream would be until his father was diagnosed with Parkinson’s disease and became homebound and unable to attend Mass regularly.

Indeed, most of the approximately 30 people who watched St. Patrick’s Masses from Oct. 14-15 on the parish’s YouTube channel thus far likely are homebound parishioners who regularly receive Communion through home visits from extraordinary ministers of holy Communion, Father Tayag said.

“It is within their attitude to remain connected to the church, and so when it was mentioned to them, some of them would watch the live streaming. ‚Ä¶(They) cannot be with us physically but may have the desire to just be connected to the parish,” he explained.

These homebound parishioners likely make up the majority of the YouTube channel’s viewers, but not all of them, he said. One parishioner recently checked out the live stream from work because he was curious to see what daily Mass was like at St. Patrick, Father Tayag added.

Young adults are likely to check out St. Patrick’s YouTube channel because it’s on a digital platform that they’re used to and comfortable with, Hamilton added. Young adults and families also may be more likely to take advantage of the opportunity to watch previously recorded Masses and other sacramental events on St. Patrick’s YouTube channel, he said.

“When there are baptisms that we celebrate, we tell the families that the Masses are live streamed so if there are family members that want to watch, or if you want to download the recorded video, you may do that. Some parents are appreciative,” Father Tayag said.

Viewers can download the recordings of such events as weddings, baptisms and first Communions, as well as funerals, and they also can share them with others online, Hamilton said.

“Families are spread out all over the world these days. It’s a great way to meet the needs of parishioners and to share, especially for special events ‚Ä¶ where families can’t make it,” Hamilton added.

The live streaming capability also has proven beneficial to St. Patrick’s faith-formation program, Father Tayag noted. Organizers have begun recording and live streaming the parish’s enrichment series for parents, so those who are unable to attend the events can watch them later on, he said. And in October, the parish recorded a presentation on vocations given by religious sisters visiting the parish. The children whose faith-formation classes met on the day of the sisters’ presentation were able to watch and interact with the sisters in person, while the students whose classes met on other days watched the recorded presentation instead.

“We were surprised that, at the last session of faith-formation, kids were still raising a lot of questions based on what they were hearing and seeing from the video,” Father Tayag said. “I think the kids still were able to engage with them (the sisters).”