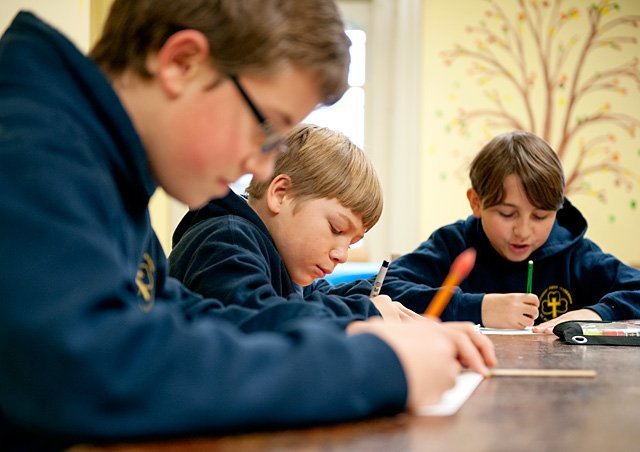 In a letter to parents of St. Patrick’s students, Bishop Matano said it was “with great sadness” that he had accepted the closure recommendation from the school’s leadership and Blessed Trinity/St. Patrick parishes.

“At the same time, I am both very grateful and deeply impressed by the extraordinary efforts of both the parish and school communities which contributed to the school’s 150 year history of Catholic education,” he wrote. “Unfortunately a pattern of declining enrollment, coupled with increased costs and serious, mounting and unsustainable financial strains upon the parish, has necessitated this decision.”

One of the oldest schools in the Diocese of Rochester, St. Patrick has been the only Catholic school in Tioga County for more than a quarter century.

The school’s future has been in jeopardy several times in recent years. It narrowly avoided closure in 2008 by meeting a minimum enrollment quota, and during the 2013-14 school year the school raised barely enough funds to open for the current year, according to a Feb. 5, 2015, Catholic Courier article.

In January 2015, a letter from Principal Paula Smith and Father Thomas Valenti, the parishes’ parochial administrator, again alerted parishioners and school families to the school’s uncertain future, noting that parish officials had asked Bishop Matano and diocesan Superintendent of Schools Anthony S. Cook III to “consider the dire financial status of the parish and school.”

In previous years, parish reserves had helped offset the school’s financial deficits, but this time the parish was projected to deplete its savings at the end of the 2014-15 school year, Cook told the Courier in January.

Upon learning of the school’s precarious financial situation, a group of parents launched an effort to raise the $500,000 needed to keep the school open beyond the current year. But the parents were unable to raise the necessary funds by a March 15 deadline, Smith told the Courier March 16.

Declining enrollment also was a serious issue. A March 20 press release from the diocese noted that only 58 students are enrolled in grades kindergarten through 6 this academic year, and that further enrollment decline was projected.

Strong enrollment history is the greatest indication of a school’s success and stability into the future, Bishop Matano noted in his March 20 letter to St. Patrick school families.

“Enrollment remains the critical concern and if our schools are to continue they require a strong enrollment history,” wrote Bishop Matano, who made the decision to close St. Patrick after consulting with the Diocesan School Board, priests on the diocesan Presbyteral Council and others.

Bishop Matano, who is a product of Catholic education, said it personally pains him to witness the closure of a Catholic school. News of the school’s closure likewise will bring pain to students currently enrolled at St. Patrick and to their families, as well as to the school’s principal, faculty and staff, Father Valenti noted in the diocesan press release. Nonetheless, the members of the tight-knit school and church community will support each other through this difficult time, he added.

“With the help of God and by upholding each other, we will pray and work together as a community to ease the sadness at the closing, confident in the knowledge that we kept the school in operation as long as we could,” Father Valenti said.

Watching the school close will be like losing a family member, Smith said in the diocesan press release, noting that her first priority right now is helping St. Patrick families find schools that meet their children’s needs and supporting staff in any way she can.

“After all have had a time to grieve, I hope we can celebrate the wonderful things St. Patrick School has meant to so many over the last 150 years,” she said. “The doors may close but St. Patrick School will always be in my heart, and in the hearts of all the many generations who have passed through its doors.”

Bishop Matano has asked the staff of the diocesan schools office to assist the parish, parents, students, faculty and staff in providing a positive academic transition, and said he hopes there will be a silver lining to the school’s closing.