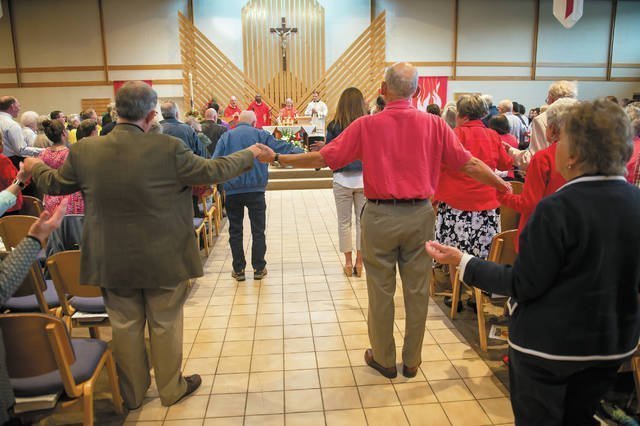 St. Paul Parish is a church community that is very aware of where it came from and where it wants to go in the future, according to Janet Trippe, chair of the Webster parish’s pastoral council.

“One of the things that makes St. Paul’s special is I don’t believe we forget where we came from, but yet we’re constantly thinking about the future and trying to generate excitement and possibilities for the future,” Trippe said. “It’s a dynamic thing. It’s not static.”

At 50 years old, the parish still is young enough to count some of its founding members as current parishioners, which makes its history and the founders’ vision seem tangible, she explained. At the same time, many of the parishioners currently leading ministries and initiatives have their own vision, which ties into the past while looking to the future, Trippe said.

Both founding parishioners as well as new leaders were represented at a June 4 Mass celebrating St. Paul’s 50th anniversary. Bishop Salvatore R. Matano concelebrated the Mass with Father Paul Gitau, St. Paul’s pastor, and both attended a reception held in the parish hall immediately after the liturgy. The reception included two large birthday cakes as well as photographs depicting the church’s construction and significant events from the parish’s half-century of service.

Father John Walsh founded the parish in 1967 at the request of Bishop Fulton J. Sheen. While the church was being planned and constructed, Masses were held at Sweet’s Farm, a nearby party house.

“There was a committee that would go in (the party house) early Sunday morning and take down all the tables and chairs and set up the chairs for Mass, and after the last Mass they would have to set everything back up the way it was,” recalled founding parishioner Carol Coyle, who served on the fledgling parish’s building committee.

By 1970 construction on the church was nearing completion, and the first Mass was held there in May of that year. Parishioners of all ages worked together to put the finishing touches on the new church, said Coyle, who vividly remembers her son, who was 13 or 14 at the time, standing on a ladder as he helped paint the church’s interior.

“It was really fun to start a parish. It really is an experience to do that,” she said. “Everybody really was involved, whether it was cleaning the church, yard work or whatever.”

Such involvement helped parishioners feel a sense of ownership of the parish, Coyle said. That sentiment appears to still be alive today, according to Cheryl Quinn, who said her fellow parishioners are always willing to pitch in and do whatever needs to be done to benefit the parish.

St. Paul’s volunteers are incredibly dedicated and more than willing to do whatever is asked of them, agreed Robin Martz, the parish’s business manager. Martz has been on the parish staff since 1997 and said St. Paul is home to people who are passionate about their parish and are “terrific volunteers.”

One of those volunteers is Morgan Chester, who frequently cantors at Mass with her twin sister, Courtney, and their father, Rich. Their dad was in the choir when they were younger, Chester said, and the girls joined as soon as they were old enough and eventually became cantors. Chester said cantoring makes Mass more meaningful for her and allows her to share her passion for music.

“If I can share it and be able to share God’s light and the gift that he gave us with another person and make their day better, why not?” Chester noted.

Many parishioners volunteer to help others through St. Paul’s many ministries, including its prayer shawl ministry, prayer chain and Good Sam Outreach. A focus on serving others is one of the hallmarks of the parish, according to Father Gitau.

“For 50 years the community of St. Paul’s has been allowing the Holy Spirit to bind us into a loving and welcoming church that uses the spiritual gifts to serve in various ministries to make our church vibrant, vital and sustainable. Everything is done out of love of God and neighbor, as is part of our mission statement,” Father Gitau wrote in his June 4 bulletin column. “May the Holy Spirit motivate, empower and strengthen us so that we continue to support St. Paul’s Church and courageously witness, spread and defend our faith.”