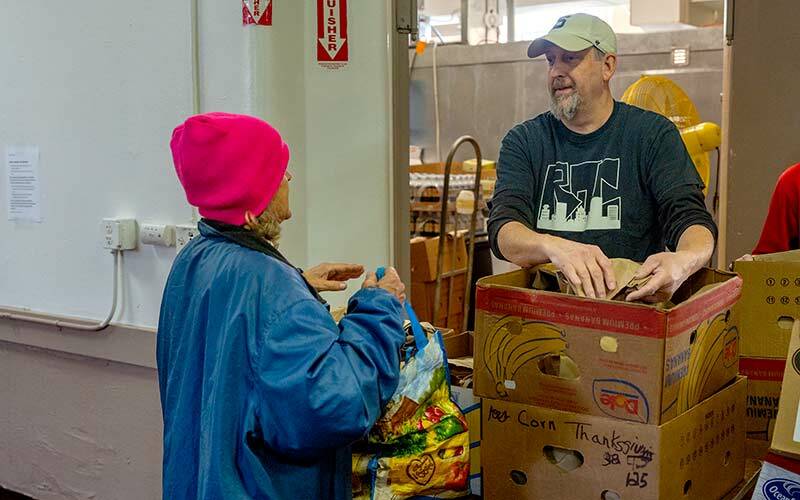 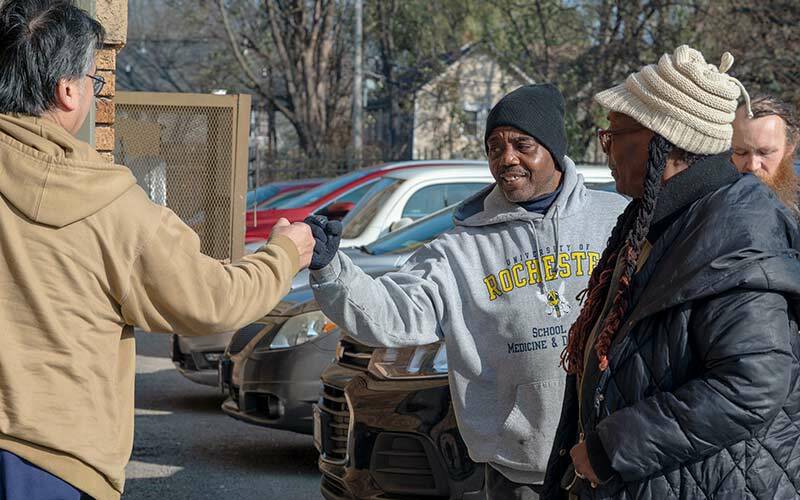 Willie Cotton gives a fist bump to a guest at the start of lunch at St. Peter’s Kitchen Nov. 23. (Courier photo by Jeff Witherow)

Christmas Appeal is a ‘lifeline’ for people in need

Willie Cotton sums up his relationship to the guests he serves at St. Peter’s Kitchen, 681 Brown St. in Rochester, by talking about how he greets them.

The volunteer food delivery driver for the soup kitchen ministry said that 20 years ago, he was homeless and struggling with drug addiction. When he turned to St. Peter’s Kitchen one day for some food, he said Patty Lorenzen, then-director of the ministry, offered him food for his soul as well.

“She got me enrolled in a 12 Steps program, and I’ve been at (St. Peter’s Kitchen) ever since,” he said, adding that he’s worked there as a dishwasher as well and also was able to land an apartment with the help of the ministry, which funded his security deposit.

He’s come so far that he’s now president of his building’s tenant’s association. St. Peter’s Kitchen has inspired him to not only better himself but to look out for people like his fellow tenants, he said.

“I love the way they reach out to people,” Cotton said of St. Peter’s Kitchen. “It’s about giving and caring for others.”

St. Peter’s Kitchen is supported by individual donors, businesses, schools, organizations, Catholic parishes and other churches, and and grocery stores. The ministry also receives funding through the annual Catholic Courier/Catholic Charities Christmas Appeal, whose 2022-23 campaign runs through the end of February 2023. Additionally, the ministry relies on scores of volunteers to prepare and serve meals as well as provide other services.

St. Peter’s Kitchen has been serving Rochester’s west side community since 1982 when it began as a Saturday soup and sandwich program operated by Ss. Peter and Paul Parish, according to the ministry’s history. Over the years, the ministry has expanded its services and continued to operate even after Ss. Peter and Paul closed in 2006. The kitchen was separately incorporated from the parish, thus allowing it to continue its work.

St. Peter’s serves 220 meals a day, according to the ministry’s Executive Director Kelly Finnigan, who succeeded Lorenzen when she retired last spring.

The COVID lockdowns forced the kitchen to shift its sit-down meal program to a takeout one, Finnigan said, and with the relaxation of COVID restrictions, guests can now either eat in the dining area or take their food out. Like a number of other folks working in hunger relief programs around the country, Finnigan said inflation, particularly in rents, is driving more and more people to seek help with food.

“I think our lunch numbers have gone up 20 percent over the last six or eight months,” he said, noting St. Peter’s Kitchen serves a wide variety of people, including the homeless, the “working poor,” seniors on fixed incomes and the children of adult guests.

Offers menu of services, from food pantry to school supplies

In addition to its daily lunch program, which is open to anyone who shows up, no questions asked, St. Peter’s also operates a food pantry that provides donated items to people who can document they live within certain ZIP code areas.

The ministry is always looking for more volunteers, Finnigan said, adding that cooks are at a premium.

“We don’t need Michelin-star-trained chefs to come in,” he said with a chuckle. “It’s really more about, are you able to cook in an industrial kitchen? Are you able to make mac and cheese for 200 people?”