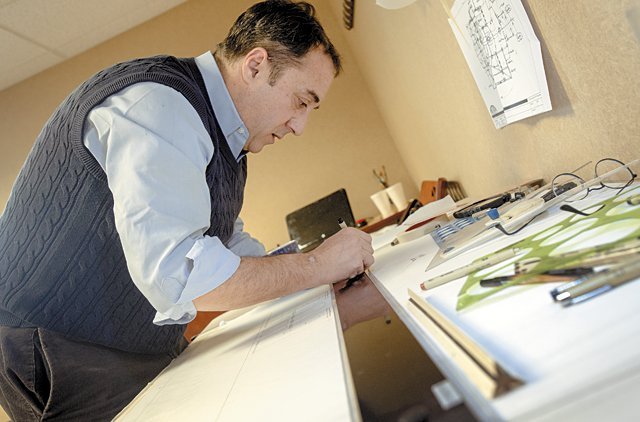 Rebuilding a church requires thinking from the inside out.

So said diocesan officials who have been working with parishioners and parish leaders on a committee tasked with creating the design for a new St. Pius Tenth Church. The prior edifice on Chili Avenue was destroyed by a fire in January 2015.

"From the altar out is really how it starts," said committee chairman Brian Porter, who has been a St. Pius parishioner since the early 1970s. "We came a long way around on how to build a church. … Every other building in construction, you build walls and see how you fit everything else in there. We do just the opposite with this."

Parishioners serving on the committee have been a godsend throughout the process, which began last April following financial resolution with the insurance company, explained Bernard Grizard, director of the diocesan Office of Parish and Clergy Services, and Betsy McDermott, a project manager in that department.

Grizard has served as liaison between the diocese and the parish, while McDermott has been the facilitator of the rebuilding process. Grizard noted that other diocesan officials with prominent roles in the process are Bishop Salvatore R. Matano; diocesan Chancellor Father Daniel Condon; Chief Financial Officer Lisa Passero; and Risk Manager Jamie Ott.

No timeline for the construction of a new church building has been determined yet, Grizard added, but the diocese and committee moved one step closer to setting a schedule last month, following a series of design meetings with liturgical designer Rolf Rohn. Msgr. James Moroney, the rector of St. John Seminary in Boston and a consultant with Rohn & Associates Design, Inc., also has provided guidance on design planning, according to Grizard and Porter. Msgr. Moroney, who was recommended by Bishop Matano, provided vital information on the norms and guidelines that any design would have to adhere to in the process of rebuilding a church, Grizard added.

The design of the new church building also will follow guidelines outlined in the U.S. Conference of Catholic Bishops’ document, "Built of Living Stones: Art, Architecture and Worship," Grizard said. These guidelines are "intended to serve as the basis for decision making at the local level and also can become the foundation for the development of diocesan guidelines and legislation governing liturgical art and architecture," the document states.

While adhering to Vatican norms and USCCB guidelines, the committee also sought to weave the parish’s history and preferences into the design process, McDermott said. The committee gathered parishioners’ input and ideas during a series of what Porter called "town hall meetings" on a new design. There was a high level of commonality among the parishioner comments, Porter noted.

The common values that arose from those sessions were:

* Nurturing a sense of community.

* Building with future generations in mind.

"I think people were less focused on the shape of the building," Porter said, noting that the former church building had an octagonal design. "(Other) things were important. We wanted to stay close to the altar, we like that sense of community and staying close. … It wasn’t too much about building another octagon." 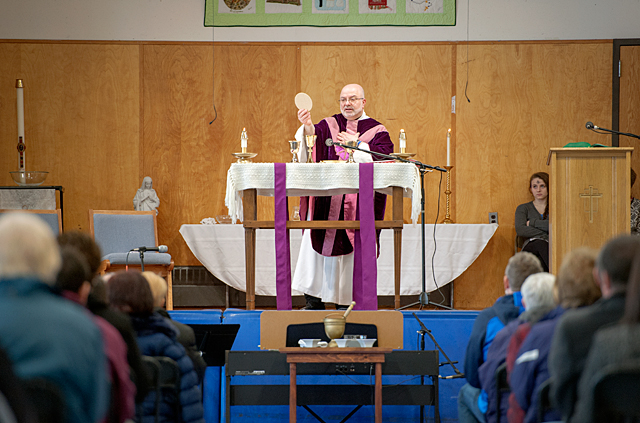 The church’s previous design also interfered with the sense of community because it had multiple entrance and exit points, Porter said.

Designing a building with fewer corners would make the structure more energy-efficient and help reduce costs, Porter said, noting that the committee will have to follow local building codes that may have been updated since the prior church was built in 1973. Such compliance would include following provisions of the Americans with Disabilities Act, Porter said, as well as an energy-code program that went into effect last year. This code encompasses the mechanical, lighting and performance systems of new commercial buildings, requiring, for example, that additional insulation be included to offset energy loss sustained when extra windows are added to a design, Porter added.

These new requirements were part of discussions during weeklong meetings with the liturgical designer last month. Subsequently, the committee will present a design for review by the diocesan building committee as well as the diocesan College of Consultors, McDermott said. When a design receives the green light, architectural plans will be created and be put out for bid for construction, with the design firm acting as a consultant for that process as well, Grizard added.

Once final plans are approved, the committee also will develop a capital campaign and decide how much the parish will need to raise to fund the project, he said. The budget will include proceeds from the $2.8 million insurance payment the parish received as a result of the fire; those funds are being held by the diocese until reconstruction begins, according to diocesan officials.

The goal of breaking ground in the spring would allow for as much time as possible for construction before winter comes, Grizard added, but many variables remain until the plan is approved, such as diocesan and town permit approvals.

Some parishioners have already donated to a rebuilding fund on their own initiative, Porter and Grizard said. In addition, a couple in the parish is fashioning crucifixes affixed with plaques from wood salvaged from the fire; proceeds from the sale of the crucifixes are going to the rebuilding fund, Porter said.

The couple’s ingenuity is one of many examples of the parish’s resiliency since the fire, he added.

"This whole experience really brought the community closer together," Porter remarked. "The church burned Jan. 1 at night, 11:45 p.m. The very next day, we held (daily) Mass in the gym. We set up an altar and tabernacle. We did not miss one Mass due to the fire. … The people were wonderful."