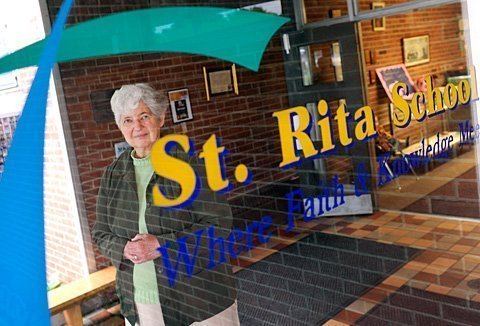 Sister Katherine Ann Rappl, who has been the principal at St. Rita School in Webster for the past 30 years, will retire at the end of the school year.

No matter how many years pass, alumni of St. Rita School in Webster will always be "God drops" to Sister of Mercy Katherine Ann Rappl.

Exceptional students at the school are recognized with this honorary designation and receive raindrop-shaped sun catchers to hang in their windows to remind them of how they capture God’s love, Sister Rappl said.

The phrase "God drops" was one that Sister Rappl picked up during a National Catholic Educational Association Conference workshop years ago, she recalled.

"A raindrop is fully made up of what a cloud is made up of," she said, noting that people are God drops because they are made up of the same substance as God. God’s life is inextricably intertwined with their lives, she said.

And for the past 30 years, the lives of the students at St. Rita School have been intertwined with Sister Rappl, who began working there as principal in 1983.

She will retire from that role July 1 and will be replaced by Mary Ellen Wagner, assistant superintendent for curriculum and instruction for the diocesan Department of Catholic Schools. Like Wagner, who has served as principal of the former Nazareth Middle School, Nazareth Academy and Holy Family School, Sister Rappl has a long history with schools in the diocese.

Formerly known as Sister Mary Benedicta, her home parish was St. Thomas the Apostle in Irondequoit, and she attended the parish school. She said the Sisters of Mercy who taught her at Our Lady of Mercy High School in Brighton were very influential in her discerning her vocation, and she became a Sister of Mercy in 1958.

Sister Rappl said she has loved being in Catholic education because she has been able to teach children both academics and their faith, and she has gotten the chance to see students grow.

"That’s a big joy in seeing how they learn to take responsibility and control of their behavior from kindergarten to sixth grade," she remarked.

And, she pointed out, J.O.Y. — an acronym that stands for Jesus, others and yourself — is the school’s theme.

"I always tell students don’t let anyone take your joy away from you," said Sister Rappl, who received the "Lighting the Fire Award" from the Catholic School Administrators Association of New York State for her 50 years of service in Catholic education.

She said she has been at St. Rita for three of her five decades in education because of the cooperation she has received from the parish community and the priests who have supported the school.

Though she doesn’t have specific plans for the future, reading more and playing Euchre — two of her passions — will probably be a part of it.

"I’m just going to be for a little bit," she said. "I’m blessed to be a Sister of Mercy, and I have the support of the community to just be, but I will find volunteer things to do."