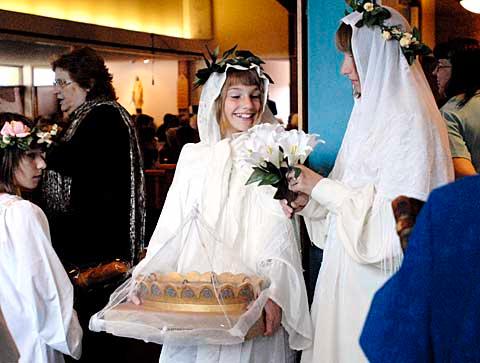 IRONDEQUOIT — Members of St. Salome Church have endured several losses over the years, including the destruction of two former church buildings in fires, the closing of the parish school and the loss of a full-time priest.

On Sunday, Sept. 26, the 102-year-old St. Salome community endured its final loss as it celebrated the final Sunday liturgy at the Culver Road church. Although the church may be used for such special Masses as funerals, it will no longer be used for regularly scheduled liturgies.

Parishioners said goodbye to their church by reverentially touching, bowing in front of and kissing a statute of St. Salome and the church’s altar.

The change in use of the church was precipitated by the start of a new daily and weekend Mass schedule for the new Blessed Tekakwitha Parish in Irondequoit, which was formed from Christ the King, St. Cecilia, St. Margaret Mary, St. Salome and St. Thomas the Apostle parishes. The single parish was recommended due to a decline in available priests, revenues and parishioners, according to the Irondequoit Pastoral Planning Group’s Feb. 10 pastoral plan.

The beginning of St. Salome’s final Sunday liturgy was highlighted with a welcome from young parishioners who portrayed St. Salome and other holy women of the New Testament. St. Salome was the wife of Zebedee and the mother of James and John, who asked that her sons sit at Jesus’ right and left hands. According to the Gospels of Matthew and Mark, St. Salome was present at Jesus’ crucifixion and went to his tomb on the morning of his resurrection. St. Salome is distinct from Salome, the stepdaughter of Herod, who asked that John the Baptist be beheaded.

Following the welcome from the holy women, parishioners highlighted church history by carrying registers that documented the baptisms, confirmations, marriages and funerals of parishioners.

During the homily, Father Norm Tanck, pastor of Blessed Kateri Tekakwitha Parish, recognized those attending who had celebrated these sacraments, attended the school or volunteered through St. Salome Church.

"For 102 years this community has listened to the Master, and we have lived the life of disciples of Christ," Father Tanck said.

The church began as a chapel of ease in 1908 for those vacationing at Sea Breeze and Point Pleasant, and it was the first Catholic church in Irondequoit. The land for the original church was donated by Salome Boucher, who requested that the church be named for her patron saint, a request that was honored by then-Bishop Bernard J. McQuaid.

St. Salome School opened in 1921 as the first Catholic school in Irondequoit and it operated until 1989. The school, convent and rectory were razed to make way for the construction of St. Salome Apartments in 2008, which were built and are managed by Providence Housing Development Corp.

St. Salome also has been without a resident, full-time priest since clustering with Christ the King and St. Thomas the Apostle in 2007. The church became part of Blessed Kateri Tekakwitha Parish on July 1, 2010.

Father Tanck noted that Blessed Tekakwitha is an example of a woman to emulate.

"She, like us, had to move from place to place before she could find a Catholic Christian community that she could call her home," he said. "There she served the poor, infirm and aged."

The Mass featured several original hymns. Parishioner and choir member Phil Morabito wrote "Jesus, Oh Jesus," which features the words "be our strength and our guide, Lord, and we will follow thee."

Attendees sang, "Blessed Saint Salome, friend of Jesus’ mother, sharing in her grief, we would follow you. Ask that mother dear, how she bore her sorrow. Bring us her strength; our love of Christ renew."

Many parishioners at the Mass echoed the grief expressed in the hymn. Randy Dayton of Irondequoit, a 1980 graduate of St. Salome School, said he moved from the Latin Mass community at St. Stanislaus Parish back to St. Salome when he learned a year ago that the church’s future might be in doubt. He said he considers St. Salome his spiritual home.

"I even moved back down here after many years of being in the city, and this is like a death," Dayton said.

That sadness also was shared by Cynthia Gallina, a parishioner for 49 years; her parents moved to the parish when she was an infant. She estimates that she has been to more than 3,000 Masses at the parish.

"I have a hard time believing that it’s going to close," Lyness remarked.

Although parishioner of St. Rita in Webster, Lyness said she has attended St. Salome over the years with her daughter.

"It gives you such a good feeling of being a family," she said of the church. "It’s a family-oriented church. They have encouraged my grandson so much in his faith."

Linda Becker’s four children were baptized at St. Salome and their baptisms are some of her fondest memories of the church.

"The wonderful friends we made through the years," Becker said of another fond memory.

Becker said she’s not sure where she’ll go next, because she hasn’t decided on any particular church. She explained that she has felt warmth and an easy-going nature at St. Salome.

EDITOR’S NOTE: Several mementos of St. Salome Church are in production. Parishioner Jeff Hanss created a sketch book of 40 images of the church, and the book will be sold for between $9 and $10, depending on orders received. DVDs also are available of the parish’s 100th anniversary, and the final liturgy also was being professionally recorded for posterity. Call the St. Salome office at 585-323-1160 for details on these mementos.