ROCHESTER -- Being a part of St. Stanislaus Kostka Church brings fulfillment to Marta Wyrozebski and her family.

"It is so important for us to come to Mass and pray (here) ... for us as a Polish people," she said following a Nov. 1 Mass marking the 125th anniversary of the church, which is located at the corner of Hudson and Norton avenues. Bishop Salvatore R. Matano presided at the Mass, with Father Roman Caly, pastor, as concelebrant.

"We are proud to be part of this wonderful church," Wyrozebski said. "Each year ... we do what we can to keep this parish alive."

Wyrozebski is a teacher at the parish's Polish school, which offers classes in language and culture. Children who attend the school also dress in folkloric outfits to take part in such special events as the anniversary Mass, parish festivals and other church holidays, she said.

"They are so excited any time they can come in costume," she added.

Several of the students -- dressed in clothing that represented the regions of Kraków and Górale -- walked in the procession and recession, and brought up the offertory gifts at the Mass, which was part of a series of November events planned to commemorate the parish anniversary.

Sonja Stenclik, the parish's catechetical leader, said many parishioners helped plan the anniversary schedule, which also included the screening of a documentary about Pope John Paul II, a bilingual retreat led by Father Jan Michalski from the National Shrine of Our Lady of Czestochowa in Doylestown, Pa., and a dinner dance.

Planners also made sure to get the anniversary Mass on the bishop's calendar early this year, she added.

"Everybody pitched in" to make the events a success, Stenclik said.

During his homily, Bishop Matano noted that the original church was a wooden chapel built in 1890. The current church was completed in 1909 using funds raised by the immigrant families who lived in the adjacent neighborhoods, according to information in a commemorative booklet.

The firm faith of the church's countrymen in Poland -- who had suffered greatly in the past under communist oppression -- has been imitated and embraced by the parish's faithful, Bishop Matano said. 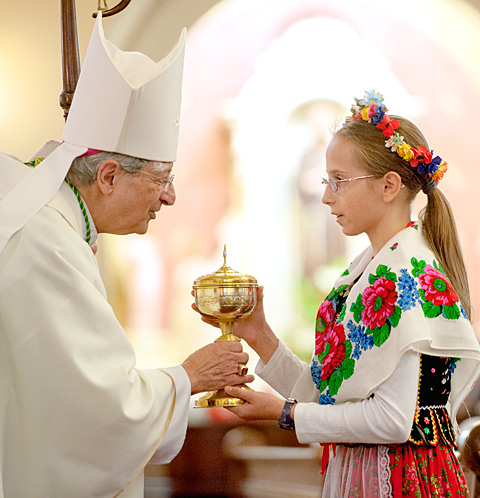 "For 125 years, this parish has indeed been the place where the faithful have prayed, calling God Father and receiving the Lord in Holy Communion, receiving his forgiveness in the sacrament of penance, being made ready to enter the gates of eternal life through the anointing of the sick; where weddings have been performed, children confirmed, and vocations to the priesthood and the religious life have ushered forth from this community of faith," Bishop Matano noted. "For over these 125 years, you have remained firm in the Catholic faith. It is this strong faith which will sustain you into the future."

Families continue to emigrate from Poland and find a home at the church, as do many people from other cultures, Stenclik noted. Her family's roots run deep at St. Stanislaus, where she said she was baptized and married. Stenclik even met her husband when they were in kindergarten at the parish school, which was operated by the Sisters of St. Joseph from 1897 until 1992.

"The bishop is the first teacher of the diocese. But together with the bishop, in the church's history in the United States, religious sisters, like those who taught here once at the parish school, directed the educational guidance of our children," Bishop Matano said. "During this year dedicated to consecrated life, vowed religious, we cannot forget that the history of these United States is replete with the contribution of dedicated religious sisters. ... Together with Bishop McQuaid, religious sisters provided a firm foundation upon which this Diocese of Rochester and this parish has grown."

The parish maintains its important role as a center of worship for the Polish community, but also serves as an oasis in the turbulent neighborhood that now surrounds it, Stenclik said. Neighbors watch out for the church, and parishioners pitch in and help as needed, she said.

"We are a beacon of hope, a beacon of light for this neighborhood, a place that gives a sense of safety, a place of beauty amidst the violence and drug deals," she said. "We are blessed."

The demographics and complexion of the area may have changed significantly over the parish's history, but the dedication of the parish's priests, religious and laity and the love and generosity of the faithful parishioners sustains a "magnificent heritage," Bishop Matano remarked.

"We (at St. Stanislaus) have strong roots not only in our Polish heritage but in embracing others who have a deep love of God and come here," Stenclik agreed.