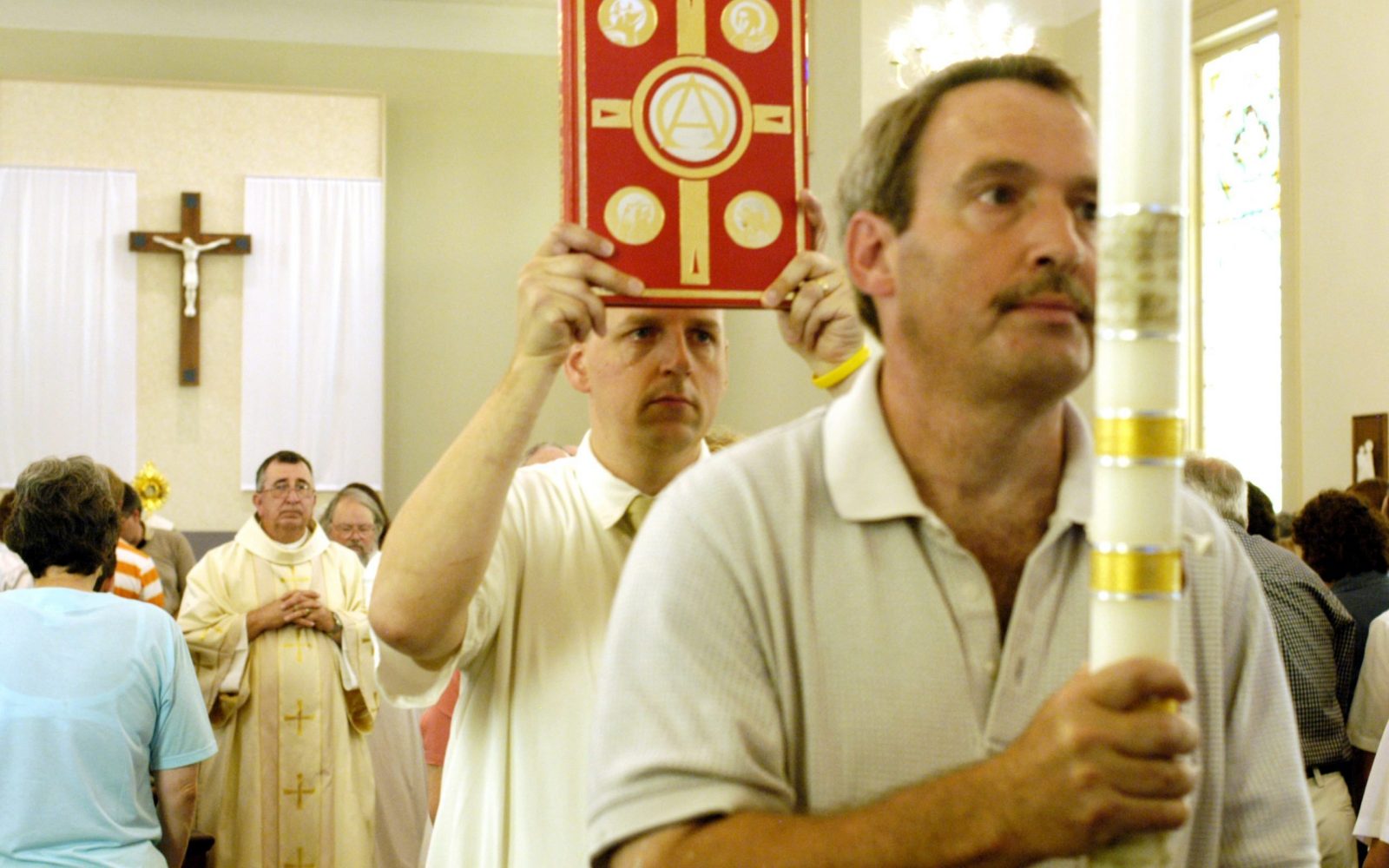 LEICESTER — It was the third goodbye parishioners said to the 111-year-old St. Thomas Aquinas Church, but the closing Mass Sunday, June 22, had the finality of a funeral.

The liturgy featured incense; the famous reading from Ecclesiastes 3:1-8 about a time for everything; fond reminiscences from a parishioner; and the symbolic stripping of the church’s parish records, Bible, sacramental oils, an image of St. Thomas Aquinas and the altar cloth.

“We may feel that this is Good Friday — that this is a death — but if we have learned anything, it is that we will rise again,” Deacon George Spezzano said in his homily.

In a gesture that echoed the deacon’s hope, parishioners also carried out St. Thomas’ potted echinacea plants, which will be planted at St. Luke the Evangelist’s other worship sites in western Livingston County: Holy Angels Church in Nunda, St. Lucy Church in Retsof, St. Mary Church in Geneseo, St. Patrick Church in Mount Morris, the Newman Catholic Community at the SUNY Geneseo and Groveland Correctional Facility.

Parish officials have said that declining attendance forced St. Thomas’ closure. After the closing Mass, Deacon Spezzano said the parish council has to sit down and decide what to do with the St. Thomas building, though he said it is likely the building will be put up for sale.

In remarks during Mass, Father William Kamau, pastor of St. Luke the Evangelist, reminded St. Thomas worshipers that although they are on an arduous journey, God is with them. He acknowledged that the church’s closing has hurt many parishioners.

“It hurts me as pastor of St. Luke the Evangelist to see St. Thomas close,” he said. “I’ve had many sleepless nights over this.”

The final Mass included reminiscing from Mabel Treadwell, a longtime volunteer and worshipper at St. Thomas. She recalled the hard work and many fundraisers that were needed to get a basement built underneath the church in 1971 to house a church hall and kitchen. The hall subsequently hosted religious-education classes, dinners, showers, meetings and, in one case, a New Year’s Eve party.

“Father (Ed) Wedow got out of bed at 2:30 (a.m.) and said Mass for us because he knew none of us would get out of bed for Mass the next morning,” Treadwell said, to the laughter of many. “We even took up a collection that day.”

Treadwell spoke of how difficult it has been for her to accept the church’s closing.

As she spoke, many worshipers dabbed at their eyes with tissue and nodded. Treadwell told her fellow St. Thomas worshipers that the other churches in St. Luke Parish are there to comfort, welcome and love them.

“I will miss this church, but my faith goes on,” Treadwell said, prompting a standing ovation from the crowd.

Several parishioners cited the many sacraments they had celebrated at the parish. Anita Christiano noted that her children had celebrated baptisms and other sacraments there. Christiano, who sang in the choir, said her happy memories include helping comfort families as part of the parish funeral choir and performing in a Christmas concert for which the entire choir dressed in period costumes.

“I know change has to come, but I didn’t know it was this hard,” said Christiano, who began attending Church of the Transfiguration in Pittsford and Guardian Angels in Henrietta after moving from Leicester to Pittsford four years ago.

Francis Christiano, who has attended the church for his entire 87 years, said his fond memories of the parish included those of longtime pastor Father Charles Reynolds, who he recalls motivated parishioners to contribute to the parish through his own example of hard work.

“I think he delivered Monk’s Bread, too,” he said, referring to the bread made by the monks at the Abbey of the Genesee in nearby Piffard.

The parish has a long history in Leicester. Bishop Bernard J. McQuaid founded St. Thomas Aquinas in 1897 as a mission church of St. Patrick Church in Mount Morris. The mission church opened in a remodeled former Baptist church that had been built in 1844 and abandoned in 1875, according to a history of the parish distributed during the closing Mass.

Bishop Thomas F. Hickey raised the church to territorial parish status in 1916, according to The Diocese of Rochester in America: 1868-1993 by Father Robert F. McNamara. In addition to the basement construction in 1971, extensive renovations were completed in 1994. The church celebrated its 100th anniversary in 1997.