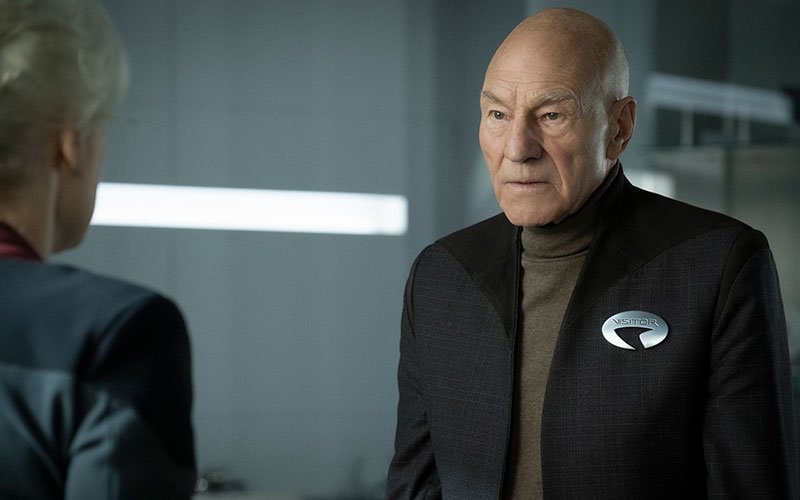 NEW YORK (CNS) — Patrick Stewart boldly goes where only he has gone before (as an actor, that is) in “Star Trek: Picard,” a 10-part series now streaming on CBS All Access.

For the uninitiated, Stewart portrayed Jean-Luc Picard, captain of the USS Enterprise, for seven seasons of the syndicated science-fiction TV show “Star Trek: The Next Generation” (1987-94).

It’s hard to say whether Trekkies, as diehard fans are called, will be delighted or disappointed by “Star Trek: Picard.” The new series, crafted by a small army of producers, directors and writers, includes all of the requisite action, intriguing characters (human and alien), exotic locations and incomprehensible technical babble that fans have come to expect.

But there was a wholesome, family-friendly quality to the earlier iterations of the “Star Trek” franchise that is missing in this reinvention. Violence, sex and language have all been ratcheted up to unsavory cable-TV levels, making this a program strictly for an adult audience.

Still, amid an epic intergalactic battle of good vs. evil, there are positive messages of friendship and loyalty to be found, as well as an intriguing pro-life stance in the central story line, as Picard risks everything to prevent the extermination of a misunderstood race.

“Star Trek: Picard” finds our hero in the year 2399, 14 years after his retirement from Starfleet with the rank of admiral. At his expansive vineyard in France, he is moody and restless, anxious for some excitement.

It lands in his lap in the guise of Dahj (Isa Briones), a young woman with a mysterious past who has narrowly escaped an attempt on her life. Tormented by visions, she finds herself inexplicably drawn to Picard.

Small wonder. It turns out Dahj is an android, and her “father” was Data (Brent Spiner), the artificial being who served at Picard’s side on the Enterprise before sacrificing his own existence to save Picard’s life. That action has haunted Picard and cemented his determination to protect all android “life.”

Dahj is being hunted down by Romulans, erstwhile archenemies of the good-guy organization the Enterprise served, the United Federation of Planets. Romulans despise androids, whom they call “Synths” (short for synthetic beings), due to an ancient prophesy that predicts Synths will destroy all organic life and summon the apocalypse.

Picard appeals to his former superiors to face the impending threat, to no avail. When Dahj is killed, Picard learns she has a twin sister, Soji (also portrayed by Briones), who is stationed halfway across the galaxy. He is determined to find her, before it’s too late.

Finally, there’s Elnor (Evan Evagora), Picard’s elfish bodyguard who looks like an extra from the “Lord of the Rings” saga.

All life, organic or synthetic, is precious, Picard tells his team, as they embark on a crusade to defend the androids’ right to existence and disrupt the Romulan plot to destroy the planet where Soji and her siblings were created.

As “Star Trek: Picard” barrels along to its shocking conclusion, Data appears to Picard in a dream, offering perspective. “Mortality gives meaning to human life,” he says. “Peace, love, friendship: These are precious, because we know they cannot endure.”