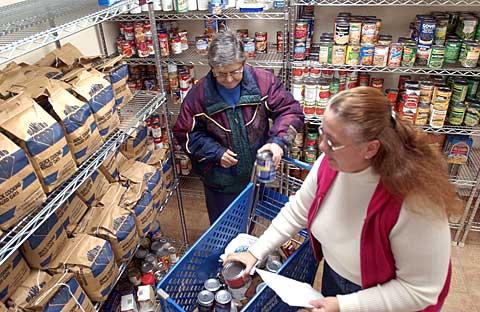 Clients select grocery items at the Catholic Charities of Steuben County food pantry in Bath in 2004. Officials say more working poor are utilizing the food pantries because of the recent recession.

"I struggle when I look at documents like this," remarked Bridget Steed, executive director of Catholic Charities of Chemung/Schuyler.

On her desk lay a list detailing cuts to the proposed 2010-11 New York state budget that would severely impair the Temporary Assistance for Needy Families (TANF) initiative. Funding for crucial social services — in such areas as child care, youth services, employment programs and homeless assistance/prevention — would be halted as part of across-the-board cost reductions called for by Gov. David Paterson, Steed said.

Yet she emphasized that these programs are vital because a growing number of residents in her region already struggle with unemployment, rising health-care costs and other poverty-related issues. Sharing her concern is Christine Sanchirico, head of Catholic Charities of Tompkins/Tioga.

"We don’t think cuts should be made on the needs of the poor," Sanchirico said.

As its March 31 passage deadline arrived, the budget was still being debated by state legislators — something that comes as little surprise, since New York has met its budget deadline just once (2005) in the last 26 years. Although there may still be time to restore funds in areas that address Catholic Charities’ primary concern — assisting those in the greatest need — Marvin Mich said the final budget likely will fall far short of providing the support he and other Catholic advocates are telling Albany they’d like to see.

"We are trying not to be too alarmist at this point, but the rumblings are not real positive," said Mich, director of social policy and research at Rochester’s Catholic Family Center.

TANF, which uses money from a federal block grant, stands to have some $132 million cut from its programs — including the complete elimination of numerous initiatives — under the 2010-11 executive budget.

One such service is Wheels for Work, which is receiving $7 million in TANF funds for the current fiscal year. The program assists residents who would otherwise struggle to get to their jobs, either by helping them obtain vehicles or offering financial assistance with car insurance and/or repairs.

Wheels for Work operates through several diocesan Catholic Charities agencies including Tioga County. Since public transportation is extremely limited there, Sanchirico said that "to cut a program like that would be devastating."

Meanwhile, two programs that address homelessness — Supplemental Homeless Intervention Program (SHIP) and Supportive Housing for Families and Young Adults, each of which received $5 million in 2009-10 — stand to be eliminated under the proposed budget. Yet Laura Opelt, who directs Catholic Charities of Steuben County, noted that her office saw a 35-percent increase in requests for housing assistance between 2008 and 2009.

"We are seeing more people who are facing eviction and being homeless. I don’t know what’s going to happen to these people," she said. "To not help somebody maintain their housing — I couldn’t imagine having a family and kids, wondering where do I go."

Opelt added that Steuben County is already in a precarious situation, having one of New York’s highest unemployment levels. According to the state’s Department of Labor, Steuben had the highest jobless rate of all 12 counties in the Diocese of Rochester with 10.9 percent of workers unemployed as of January 2010. Another Southern Tier county, Schuyler, was second-highest at 10.6 percent, while the state average was 9.4 percent.

"I don’t know how people make it. They are not making it," Opelt said.

Paterson’s proposed budget seeks to close a projected $7.4 billion shortfall. In addition to human services, significant cuts are planned in such areas as education aid, which would be reduced by $1.1 billion; and Medicaid and health care, with a $1 billion reduction in spending that would see hospitals and nursing homes hit especially hard.

Mich said the New York State Catholic Conference and its constituents have been speaking out about the executive budget from the time it was released on Jan. 19. He added that budget concerns played into many of the issues discussed during Public Policy Day March 9, when he and other representatives from the Rochester Diocese joined in Albany with Catholics from around the state to lobby legislators.

Among the top public-policy priorities for New York’s Catholic bishops are restoration of funding for low-income expectant and new parents that would be eliminated under the proposed budget; ensuring services for senior citizens and the disabled; preserving Catholic schools by remitting promised reimbursements to those schools and offering educational tax credits to families; and generally advocating for the poor and vulnerable in the budget process during this difficult economic period.

Mich reported that the two legislators he spoke with on Public Policy Day, Assemblyman Bill Reilich and Sen. Joseph Robach, were sympathetic to his concerns and interested in learning more about them. But Reilich also reminded him of the uphill battle he faces in stumping for change.

"He said, ‘If you want us to increase funding in one place, you have to show us where to cut it from somewhere else,’" Mich said.

Mich acknowledged that Paterson is well-intentioned in trying to guide New York state toward economic recovery and fiscal responsibility: "The governor is trying to be honest with people about this." Yet he maintained that programs and staff would experience crippling reductions at Catholic Family Center and other Catholic Charities agencies if the budget goes through as proposed.

"It’s a tough time to be in human services," he remarked.

Then again, their day-to-day caseload is so heavy that Catholic Charities officials have only so much time to worry about the future. On a recent Friday at the Tompkins/Tioga office in Ithaca and the Steuben office in Bath, several people came through the doors of both facilities within short periods of time seeking various services.

"Most of the people we see are the working poor, or they lost jobs during the great recession," added Andy Mazzella, director of the Catholic Charities Turning Point emergency-services centers in Bath, Corning and Hornell. For many people who obtain groceries from the Turning Point food pantry, "what you see is a family of four living on that for three days," he said.

Opelt, Sanchirico and Steed said they’re hopeful that local public support will pick up much of the slack left by budget cuts. An encouraging example was offered by an man in Ithaca who pulled up with a small truckload of clothing and other donated items that took several minutes to transport into the Catholic Charities facility.

"People know that other people are hurting, and they’re responding," Sanchirico said.

"It’s amazing, the generosity we’ve seen in our community. It’s amazing how our community does respond with open hearts," added Michelle Brichacek, coordinator of the Samaritan Center emergency-services program in Tompkins County.

"We are in the middle of a recession but people step up. We see it time and time again. We do have a very giving and caring community," Opelt agreed.

EDITOR’S NOTE: As of press time April 1, the state budget had not yet passed. To make your voice heard about the proposed budget cuts, join the New York State Catholic Conference’s Catholic Advocacy Network by visiting www.nyscatholic.org.