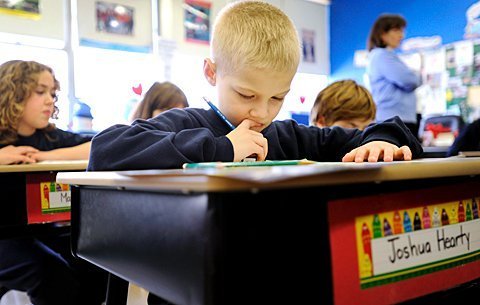 Institutions, agencies and organizations throughout the state wasted no time in voicing their displeasure with deep cuts proposed in the 2011-12 executive budget proposed by newly elected New York Gov. Andrew Cuomo.

In releasing the budget Feb. 1, Cuomo acknowledged that the cuts will be painful, but said they are necessary in order to eliminate the state’s $10-billion deficit without raising taxes or borrowing funds.

"We simply cannot afford to keep spending at our current rate," Cuomo said in a Feb. 1 statement. "Just like New York’s families and businesses have had to do, New York state must face economic reality. This budget achieves real, year-to-year savings while restructuring the way we manage our state government. This is the first step toward building a new New York."

School officials have cried foul, however, as have the heads of local health-care institutions and Catholic Charities agencies.

In New York state, public and nonpublic schools alike are required to perform certain mandated services for which they are reimbursed by the state. One of these services is the Comprehensive Attendance Policy, through which schools are required to record daily attendance for reporting to the state, a chore for which they have been reimbursed, explained Stephen Oberst, principal at St. Pius Tenth School in Chili. The state also reimburses schools for keeping records and for administering certain tests, he added.

"The state requires that there are certain tests that students are required to take. At the high-school level it’s the Regents, and at the elementary level it’s tests in the areas of English language arts, math and science. And the state reimburses us for those mandated tests," Oberst said.

Under the proposed budget, both public and nonpublic schools would see a reduction in the amount of reimbursement they receive for carrying out these mandated services.

"It’s going to be across the board and it’s going to impact everyone," Anne Willkens Leach, diocesan superintendent of Catholic schools, said of the reimbursement cuts. "I think what folks have seen in our schools with trying to make ends meet, consolidations and things like that, I think they’re going to see that now in public schools."

Advocates for Catholic schools, however, say the cuts will be felt much more acutely in nonpublic schools, which are facing an 8-percent cut in reimbursement for mandated services. Public schools are facing a 7.3-percent cut in mandated-services reimbursement. In addition to this disparity, the state already owes millions of dollars in unpaid reimbursements to religious and independent schools for mandated services carried out since the 2003-04 school year, according to the New York State Catholic Conference, which is the public-policy arm of the state’s Catholic bishops.

"We estimate the state’s obligation to our schools to be approximately $270 million, and as a result of our state’s delinquency, our schools have been forced to raise tuition to fill the gap," New York Archbishop Timothy M. Dolan testified during a Feb. 15 joint legislative budget hearing.

"Anything you short on there has to be made up in some other way. That obviously affects our bottom line," he said.

The state Catholic conference issued an action alert Feb. 4, urging Catholics to urge their state legislators to treat Catholic schools equitably. A sample letter to legislators and a transcript of Archbishop Dolan’s testimony may be found here.

Similarly, local Catholics in the health-care field are concerned about the proposed budget’s 2-percent year-to-year decrease in 2011-12 spending on Medicaid, which is the government-funded health program for the poor. Cuomo already has appointed a Medicaid Redesign Team, which will recommend gap-closing actions expected to cut billions from the state’s Medicaid spending.

Elizabeth Mullin-DiProsa, president and CEO of St. Ann’s Community in Rochester, said the suggestions she’s heard thus far are troubling. One scenario calls for a 10-percent reduction in the rate health-care institutions receive for caring for Medicaid patients.

"For us Medicaid represents about $26 million in revenue. If we have a 10-percent cut, that means we have to cut $2.6 million, which would be devastating to say the least," Mullin-DiProsa said.

This is especially problematic, she added, because the current Medicaid rate already is too low.

"The Medicaid rate as it stands now pays us about $70 a day less than what it costs to provide the care," she said, noting that 75 percent of St. Ann’s long-term residents are on Medicaid.

"You can’t make the kind of reductions that are being proposed without affecting the care of the residents," she said.

New York’s bishops, meanwhile, see the redesign of the state’s Medicaid program as an opportunity to uphold the dignity of human life. Each year more than $45 million in Medicaid funding — derived from state and local tax payments — are spent on abortions, according a statement of core principles regarding Medicaid reform, which the bishops issued Jan. 31. New York is one of only four states to appropriate Medicaid funds for elective abortions, the bishops noted.

"At a time of cost-cutting for essential Medicaid services, we strongly urge that Medicaid dollars be used solely to provide life-affirming health care and not for elective abortions," the bishops stated.

"The upside is that by combining sources into one it encourages collaboration among providers," Opelt said, noting that her agency already is planning to develop a joint funding proposal in conjunction with several other Steuben County service providers.

"The downside is it also creates competition, as the total (new) dollars available will not be equal to the sum of the (previous) parts. In short, we will be expected to do more as homeless numbers are on the rise, at a time when we have even fewer resources to work with," she said.

Cuomo’s proposed budget also would eliminate Healthy Families New York Home Visiting Program, which provides support for new parents during pregnancy and the first few years of children’s lives, according to Melody Johnson, associate executive director of Kinship Family and Youth Services. Healthy Families Southern Tier is a part of this Catholic Charities agency, and research has shown the Healthy Families program to be successful in reducing the number of babies born with low birth weight, preventing child maltreatment and promoting academic success, she said.

The budget proposes to eliminate several other related programs, replacing them with one new Primary Prevention Fund that would offer about half of the combined funding of the previous programs, Johnson said. Individual programs would need to apply for grants from this fund, and counties would be required to pick up a large percentage of the remaining costs, she added.

Eliminating this program would be devastating for the 300 Steuben County families it serves each year, and it doesn’t make fiscal sense, Opelt stated in a Feb. 11 letter to Cuomo. It costs the state much less to provide this program than it does to pay — through Medicaid and state-sponsored insurance plans — for additional health care needed by low-birth-weight babies, or to provide foster care for abused children, she wrote.

Opelt said she’s sure Catholic Charities agencies somehow will find ways to weather the proposed budget cuts, perhaps in part by utilizing more volunteers whenever possible. She said concerned Catholics in the Southern Tier already have taken matters into their own hands by staging a March 15 showing of the film "Archbishop Fulton J. Sheen, Servant of All." They’ll show the movie at 7 p.m. in the Palace Theater, 17 W. Market St. in Corning, and ask movie-goers to make free-will donations to Catholic Charities of Steuben County and the Elmira Community Kitchen in Chemung County.

"We are doing God’s work, and when that’s the case God will find a way for us to do this important work," Opelt said.