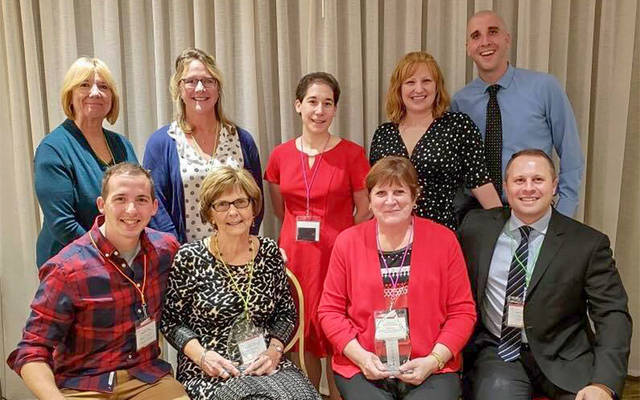 Ann Marie Deutsch, principal of St. Mary School in Canandaigua, and Ann Frank, coordinator of assessment and professional growth for diocesan Catholic schools, received Light the Fire for Catholic Education Awards during a Nov. 4 dinner in Albany. The award is presented annually by the Catholic School Administrators Association of New York State to honor those who have had a significant impact on Catholic education and helped to further Catholic education in their own dioceses, according to Anthony Cook, diocesan superintendent of Catholic schools.

“Typically, they only select one per diocese (for the award), if that, but this year, we were fortunate to have two (recipients), which was pretty awesome,” Cook said.

Deutsch has spent 30 years serving as a teacher and administrator in diocesan Catholic schools, the last 18 as principal of Canandaigua’s St. Mary School. Previously, she taught third grade for 12 years at the former St. Boniface School in Rochester.

Cook, who was a school principal at Brighton’s Seton Catholic School before becoming diocesan superintendent, said he was fortunate to have the opportunity to work with Deutsch as a colleague.

“She has done so much, not only for St. Mary School, but also for all the schools in the diocese,” Cook said, noting that Deutsch has been instrumental in St. Mary School’s annual Spelling Bee and organizes the diocese’s annual Catholic Schools Week Mass at Sacred Heart Cathedral. She also serves as the Diocese of Rochester’s representative on the state coordinating committee, which comprises Catholic school leaders throughout New York who lobby state legislators on behalf of schools and families.

Deutsch said receiving the Light the Fire Award has great personal significance, but is not something she has shown off to others.

“I love doing what I do, and the award is significant because it just personally gratifying, but I would do this without an award,” she said. “I love what I do. I love being with the kids, I love talking with the parents. I love trying to get the best programs for students and I love advocating for Catholic education.”

“She said, ‘I think you would be perfect for this position,’” Frank recalled, noting that her former colleague was right. “I love it. Everyone is so friendly and easy to work with. It was a great environment to be in.

Frank said her position primarily involves working with the principals and teachers of the 18 Catholic schools in the Diocese of Rochester.

“It is fulfilling to me to watch them introduce new things as they come along,” she said. “To watch them and their excitement and how they are going to be able to bring it back and present it to the students. I enjoy working with them. They are wonderful group of people.”

Frank called receiving the Light the Fire for Catholic Education a “humbling experience.”

“I was very surprised to be recognized,” she acknowledged. “I don’t think it has ever happened in the history of the award ‚Ä¶ that we have had two people from our diocese receive the award (in the same year), so that right there was kind of an accomplishment. And to be honored with Ann Marie Deutsch, who has been in the (Catholic) system for a very long time and to have it that I was also recognized with her was quite a humbling experience,” she added.

Cook said he cannot say enough about Frank as a colleague. Having interacted with her during his years as a principal, the superintendent said he was very excited when beginning his current job to have the opportunity to work with Frank in a new capacity.

“She has the highest respect, not only from our teachers, but from our administrators. She is a very organized professional, but also has such a energy about her that she brings to her work,” he said.