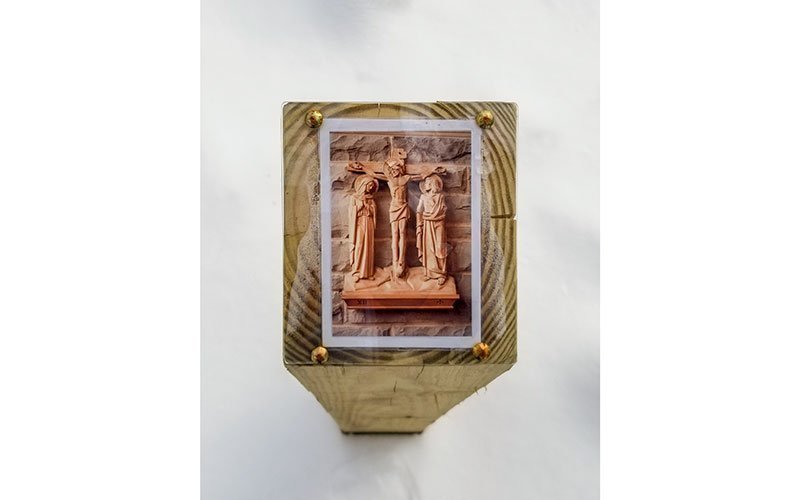 A new outdoor Stations of the Cross, including the 12th Station (pictured), is available for parishioners and visitors in a wooded area directly behind St. Catherine of Siena Church in Ithaca. (Courier photo by Mike Latona)

ITHACA — As the snow melts away and foliage begins reappearing, the wooded area on St. Catherine of Siena Church’s property features a new — and deeply spiritual — attraction that adds to its natural beauty.

It’s an outdoor Stations of the Cross, available for prayerful viewing during this Lenten season and the rest of the year as well. Set along a winding path through the woods directly behind the church, the 14 stations depicting Jesus’ passion have been in place since last fall.

They’re the focal point of a project begun three years ago, shortly after Craig Murray was hired as the parish’s maintenance technician to oversee the church’s buildings and grounds. Murray recalled that at the time, Father Joseph Marcoux, pastor at St. Catherine of Siena, raised the possibility of creating a path and eventual Stations of the Cross.

“Father Joe thought it would be very peaceful,” Murray said. “I went right back and started making a path.”

However, a daunting challenge awaited. Murray first had to clear away many dead trees, taking care not to cut down any live ones. His next step was to begin forming a path, lining it with the larger logs. Using a rented wood chipper, he ground up numerous branches and, with volunteer help, spread the chips along the pathway.

The actual Stations of the Cross consist of 3-foot-tall wooden posts that Murray formed from the logs. Atop each post he affixed a laminated close-up photograph of a Station of the Cross from inside St. Catherine Church. The posts were then cemented into spots along the path that had been chosen by Father Marcoux.

Murray said the initiative has come together gradually; for the most part he’s only been able to work on it at the end of work days after completing all his other duties. In fact, there’s still a way to go: the logs lining the pathway are in the process of being replaced by washed river rocks, and, at this point, only about one-third of the rocks have been put in place. Yet with spring having arrived, Murray expects the entire project to be finished over the next few months.

And, with the most crucial parts completed, the Stations of the Cross are ready right now to be experienced by anybody traveling to St. Catherine of Siena, located at 309 Siena Drive in the northern section of Ithaca. Father Marcoux encouraged the stations’ usage in a bulletin notice this past winter, stating, “It is a beautiful area for contemplation and prayer, and we are incredibly grateful to Craig for his hard work.”

“He’s like a superstar. He’s the man,” Father Marcoux remarked to the Catholic Courier in praising Murray’s contributions to the parish.

Father Marcoux, along with Murray, also expressed their gratefulness to many volunteers who have assisted with the project, particularly from Cub Scout Pack 55 in Ellis Hollow and Boy Scout Troop 48 in Lansing. Murray added that parishioners Brian and Bernice Magee are donating the rocks from their farm and have already made a number of trips to St. Catherine to drop them off.

Father Marcoux noted that this is the third initiative on St. Catherine of Siena’s property to have vital Scouting contributions. In 2003 a prayer labyrinth was created by David Colucci for his Eagle Scout project; the labyrinth was recently refurbished by his parents, Liz and Steve. In addition, a vegetable garden was started five years ago by Aidan Mackenzie, also for an Eagle project. Last year, the garden yielded 3,275 pounds of produce, all of which was donated to the Loaves & Fishes food pantry.

As for the Stations of the Cross, Murray is excited for people to begin fully utilizing them, saying they’ll enjoy the peace and abundant natural beauty surrounding the stations.

“Now when you walk out there, it’s actually something special rather than a walk in the woods,” he said. “I like to see people out there using it. When you walk back there and take a few minutes and if you’re all stressed out, it can really calm you down.”

Murray also acknowledged the spiritual importance of this special remembrance of Jesus and his ultimate sacrifice.

“I never really thought about it that way until I put the pictures on the posts,” he remarked.