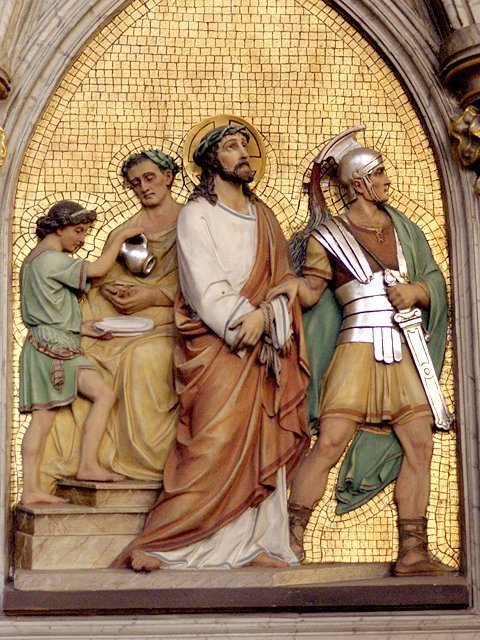 It was prayed by early Christian communities, especially in the fourth century, when the Roman Empire began to recognize Christianity. Oftentimes, people would make a pilgrimage to Jerusalem to retrace Jesus’ steps from his arrest in the Garden of Gethsemane to being forced to carry the cross to the crucifixion site at Golgotha.

Those who could not visit Jerusalem would use the community’s churches and other buildings as “stations” that represented each stage of what happened to Jesus between his trial and his entombment. Groups would travel from station to station, remembering and praying at each one. The devotion gained even more popularity because it was prayed in the vernacular rather than in Latin, and people could understand what was going on.

Eventually, individual churches erected plaques or other pictorial depictions of all the stations. Stations are usually hung separately, one by one, seven on each side of the church.

The Way of the Cross traditionally consists of 14 iconic stations that depict the events of Jesus’ journey to crucifixion. A 15th station, which is not depicted by an icon, is meant to remember Jesus’ resurrection. The 14 traditional stations are:

* Jesus is condemned to death

* Jesus falls for the first time

* Simon of Cyrene carries the cross for Jesus

* Veronica wipes the face of Jesus

* Jesus meets the women of Jerusalem

* Jesus is stripped of his clothes

* Jesus is nailed to the cross

* Jesus dies on the cross

* The body of Jesus is taken down from the cross

* The body of Jesus is laid in the tomb

When praying Stations of the Cross in church, either the entire assembly or just a small group of people move from station to station. The devotion begins with an opening prayer, usually at the foot of the altar. The song “Stabat Mater,” or its tune set to different lyrics, is played. During the first part of the song, people move to the first station, where some sort of reverent gesture, such as genuflection, is made and a responsorial phrase is recited. The name of the station is announced, a reference to Scripture is read, and people kneel and say a prayer. This is done at all 14 stations, and when the procession returns to the altar, the 15th station is prayed there.