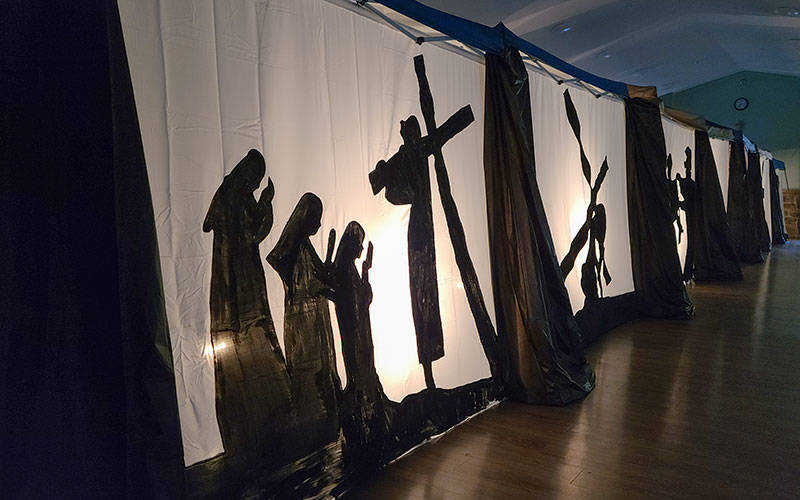 St. Catherine of Siena Church in Mendon created a self-guided Shadow Stations of the Cross in its community center. The stations comprise painted, backlit panels and will be open through Holy Week. (Courier photo by Jeff Witherow)

Making lemonade out of lemons, figuratively, has become common over the past 12 months as parishes have adapted beloved traditions to conform to the limitations of life during a global pandemic. Some of these adaptations likely will disappear when life eventually returns to normal, but others may stick around.

The new walk-through Shadow Stations of the Cross at St. Catherine of Siena Parish may be one of those that stands the test of time, according to Karen Luke, pastoral associate of faith formation at the Mendon parish. This new Lenten offering, which is set up in the parish’s community center, features large silhouettes depicting the Stations of the Cross, music and handouts to use for prayer and reflection.

“A lot of the things that we had adapted because of COVID, we have gotten such a great response to that I don’t want them to go away,” she remarked.

“Because of COVID, we couldn’t do that this year, but … I still wanted to do something, because we didn’t have anything last year,” she explained.

Luke initially wanted to create a drive-through display, with a QR code on each station that, when scanned with a smartphone, would allow visitors to listen to recorded reflections and prayers from their car. The logistics this would require, combined with the uncertainty of March and early April weather in the Rochester region, convinced Luke to opt for an indoor display.

To make the 14 stations, Luke used a projector to cast a silhouetted image of each onto a large, white, queen-sized bed sheet, and then she and Father Rob Bourcy, pastor at St. Catherine, painted the projected images with black paint. They hung each sheet from a 10-foot by 10-foot pop-up tent, some of which were donated or loaned by parishioners.

Seven of these tents are lined up inside the community center. The sheets hang along the outer edges of the tent line, and lights inside the tents shine through the sheets.

“You walk in and do the first seven, then go around and do the second seven,” Luke explained.

When people walk in, they can grab one of two handouts to help them experience the stations, she added. The first handout is a booklet with Scripture passages, reflections and prayers for each station. This booklet has a social-justice theme and was modeled after a similar resource put out by Catholic Relief Services in 2005, Luke said. The second handout contains just a single word for each station, she added.

“That way they can come again and use the second handout, and it would be a whole different experience than the first time. Or if they don’t have that much time but they want to see (the stations), they can meditate on the words,” Luke said.

St. Catherine’s music director, Pam McInerney, put together a playlist of soft piano and organ music, which plays in the background as people move from station to station. The act of walking from station to station, along with looking at the silhouettes, listening to the music and reading the prayers, provides a multisensory experience, she added.

“It’s different when you are sitting in church listening to someone reading the stations or reading to yourself, but when there’s something that engages all of your senses, it brings it to a different spiritual level or awareness,” Luke said.

People are welcome to come to St. Catherine’s community center to experience the stations between 9 a.m. and 8 p.m. March 31 and April 2, and between 9 a.m. and 10 p.m. April 1. It was important to Luke to make the experience accessible for those who may not be comfortable with crowds or available during the hours parishioners typically gather to pray the stations, she said.

“I really want people to just get out of it what Jesus did for us, especially with what is going on in our society with other people and the pandemic and the racism and all the injustices that we just can’t seem to get past. I want them to continue to feel called to follow in Jesus’ footsteps and fight for our brothers and sisters in Christ who are marginalized in our society,” Luke said.

Luke hopes to utilize this model again in the future in some way, even after things have gotten back to normal after the pandemic, or possibly sharing it with other parishes.

“For the amount of work and energy that went into it, I would be devastated if we didn’t use it again in some capacity,” she said.