Statue of Jesus near Canandaigua Lake has storied past - Catholic Courier 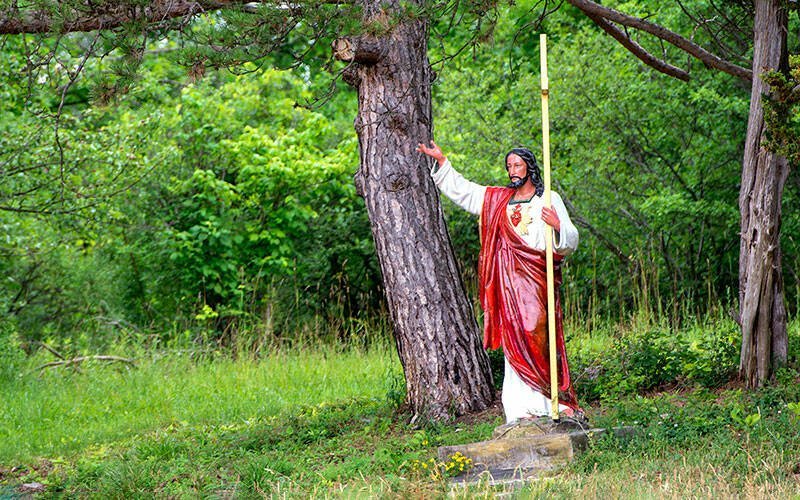 In the 1920s and 1930s, it stood on a hillside overlooking Canandaigua Lake, guiding Sunday-morning boaters to a small lakeside chapel. These days, it stands a little further up the same hill, watching over the cars and trucks that drive past on West Lake Road near Foster Road.

The statue of Christ the Redeemer has been a visible symbol of faith in the Canandaigua community for as long as most residents can remember.

“It’s become a kind of a landmark on West Lake Road after being there all those years,” remarked Larry Driscoll, whose grandparents, Anne and George Bigham, once owned the land upon which the statue stands.

“The origin of the statue goes back to the early 1900s, when Father James Dougherty, the pastor of St. Mary’s Church in Canandaigua, proposed to the Rochester Diocese the construction of a lakeside chapel to accommodate the spiritual needs of summer boaters,” Driscoll said.

The Our Lady of Lebanon Chapel was constructed in 1915, and for nearly two decades, it served Catholics during the summer months. Some of these Mass-goers traveled over dirt roads to get to the chapel, while others traveled across Canandaigua Lake by boat in order to access it.

“In order to make the chapel visible to boaters, Father Dougherty erected a 7-foot statue of Christ the Redeemer on the lakefront,” Driscoll said.

In 1934, the Diocese of Rochester sold the chapel and it became a private residence. Anne Bigham, a devout Catholic who lived near the Our Lady of Lebanon Chapel, wanted to move the statue up the hill to her family’s farm.

“I think it’s a good example of somebody with a strong faith wanting to maintain a visible religious symbol,” Driscoll mused. “Most people would have said, ‘Well, we’ll just leave this statue here.’ She didn’t want to have that happen. She wanted it to continue as a visible symbol of faith.”

Although her husband, George Bigham, wasn’t Catholic, he supported his wife, both in her desire to move the statue as well as her passion for her faith, Driscoll said.

“I don’t remember him ever going to church, but he supported her. All the kids went to Catholic school at St. Mary’s and grew up Catholic,” recalled Driscoll, who as a child spent a lot of time helping George Bigham work the farm.

After Anne Bigham requested the statue be moved to their farm, George Bigham built a sled-type device called a stone boat out of planks and put the concrete statue onto it.

“The mules pulled it up the hill. It was a major undertaking,” Driscoll said. “They placed it near the farmhouse so my grandmother could look at it. She had a big picture window, and she could sit in a chair and look up at the statue.”

Anne Bigham, who was a licensed real-estate broker, eventually sold a large part of her family’s farmland to the Congregation of the Most Holy Redeemer in the mid-1960s so the congregation’s Redemptorist priests could open Notre Dame Retreat House on the hill overlooking Canandaigua Lake.

“When my grandmother sold the land to the Redemptorists, it was so important for her to keep the statue there that she gave them a very low price for the land, but in the deed was a promise that they would maintain the statue,” Driscoll said.

In recent years, Driscoll has worked with the retreat house’s rector, Redemptorist Father Frank Jones, and several volunteers to spruce up the statue. Skilled masons volunteered their time to fix some of the cracked and broken parts of the statue, and Naples artist Darryl Abraham repainted it with a high-quality paint that should last several years, Driscoll said.

Driscoll has funded some of these necessary repairs and said he feels he owes it to his late grandparents to work to keep up something that was so important to them. Father Jones also said he is committed to ensuring the statue remains in good condition.

“He and I see eye to eye on what we want to do there,” Father Jones said of Driscoll, noting that both men hope to improve the grounds around the statue in the near future. “It is a statue of our Lord that has had great significance for this area, with a real history, and we hope the savior will continue to bless all of us.”