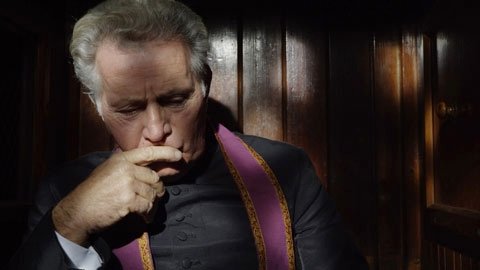 NEW YORK (CNS) — Its title notwithstanding, night falls on 1950s Catholic Ireland in "Stella Days" (Tribeca). Director Thaddeus O’Sullivan’s adaptation of Michael Doorley’s memoir tells the story of a country in transition and one priest’s struggle to keep his flock — and himself — from spiritual exhaustion.

Antoine O. Flatharta’s script does not condemn the church and its role in Irish society outright, but marginalizes it, casting it as a relic of a rose-colored time in recent history. In this sense, "Stella Days" could be regarded as a cinematic stand-in for the real-life Irish church today, fighting to regain trust — and to be recognized as relevant — in the aftermath of traumatic scandals.

Unfortunately, "Stella Days" does not inspire much confidence in this regard. The aforementioned clergyman, Father Daniel Barry (Martin Sheen), is outwardly sunny and cheerful, but inwardly bored and depressed. Educated in Rome and having spent many years in America, he feels out of place in the remote and impoverished village to which he’s been posted.

While Father Barry does not neglect his priestly duties, he finds them stifling and unfulfilling. His flock is aging and superstitious. His parish choir tortures Gregorian chant. Confessions are sincere but mundane: "I committed the sin of pride by admiring myself and my new dress in the mirror."

A telling moment in the film comes at the bedside of a dying old woman. She asks Father Barry where heaven is. He cannot answer. "So we know where we are," she responds, "but we do not know where we are going."

In another sense, though, Father Barry does know where he’s going. He’s counting on a one-way ticket back to Rome. But his plans are dashed by his superior, Bishop Hegerty (Tom Hickey).

The bishop is obsessed with finances and with the "constant, never-ending battle for the control of hearts and minds," as he misguidedly describes the church’s mission. He wants to build a new parish church, and Father Barry must remain and raise the money.

It’s a hopeless cause, until Father Barry sees the light — literally.

Electricity has finally arrived in his village, and with it modern conveniences and illumination, as well as new temptations and distractions. Father Barry, a fan of the cinema, thinks a picture house, called "The Stella," is just the ticket to raise money and, at the same time, engage his wandering flock.

Just why the opportunity to see Burt Lancaster and Deborah Kerr cavorting in the surf in "From Here to Eternity" should bring people flocking back to church is anyone’s guess. But films, Father Barry insists, can be a source of entertainment and enlightenment. "The soul is fed by many things," he says.

Leading the opposition, predictably, is the bishop. He finds an ally in Brendan (Stephen Rea), a local politician. "Once you have turned on the filth and immorality, it is hard to turn it off," he predicts. And how.

Undaunted, Father Barry joins forces with Tim (Trystan Gravelle), a new teacher in the parish school. Tim is young, worldly, "with-it." He sets his own rules, casting morality aside as he beds his married landlady, Molly (Marcella Plunkett). Clearly, "Stella Days" pins its hopes for the future on Tim’s generation, free of the influence of the once-mighty Catholic Church.

The film also casts new vocations to the priesthood in a questionable light. Father Barry discourages Molly’s young son Joey (Joey O’Sullivan), who thinks God is calling him. "I was called, but not by God," he tells Joey. He then recounts his own sad story, which hinges on his having been given away by his parents to the church at the age of 12.

In the end, the artificially lit world of "Stella Days" leaves little room for the Light of the World, or his church on earth.

The film contains an unflattering portrayal of the Catholic Church, an adulterous relationship and some rough language. The Catholic News Service classification is L – limited adult audience, films whose problematic content many adults would find troubling. Not rated by the Motion Picture Association of America.