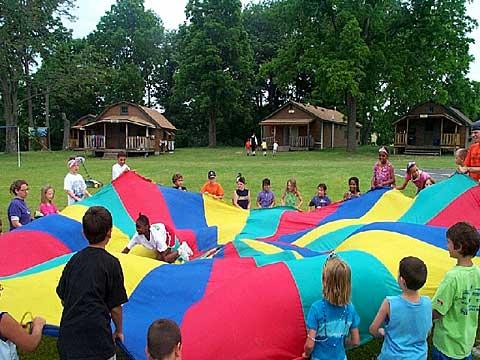 Camp Stella Maris has been welcoming children to its Livingston County location for more than 80 years. The campsite stretches across a beautiful 28 acres, overlooking a breathtaking view of Conesus Lake. Resident camps are conducted for eight weeks during the summer with a mission of creating a Christ-centered, caring environment and experience, fostering continued spiritual, physical and emotional growth.

"What I’m most impressed with is how we’ve really gotten back to our mission and holding true to what that is," Alice Miller Nation, spiritual director, said of the faith and spirituality part of the camp’s mission. Through her good work, Stella Maris has made a significant effort to reconnect with the priests of the Rochester Diocese, many who worked at the camp as seminarians.

John Quinlivan, executive director of the camp, continues to work at strengthening relationships with the diocese. This is especially seen with the revival of the "Priest of the Week" program. This program presents a different guest priest each week to perform a daily Mass for the campers. In the past few years priest participation in this program has become a more frequent reality, significantly enhancing the spiritual dimension of the camp.

In addition to a traditional summer-camp experience for children ages 7 to 15, Stella Maris also offers two different programs for older teens. The first is the Leader-in-Training Program, which is a two-week leadership training course for 15-year-olds. There also is a program for 16-year-olds to participate in called the Counselor-in-Training Program to prepare them to become future camp counselors.

"The programs are really great for building character and leadership qualities in young adults," said Tom Weaver, a past participant in the programs who now is Camp Stella Maris’ group and program coordinator. Currently more than 80 teens are participating in these programs, marking a significant increase from six participants when the courses were initially offered in the mid-1980s.

Although Camp Stella Maris offers a variety of programs, the one that seems to have the greatest impact is the Campership Fund. This program began in the mid-1970s as a way to help lower-income families afford to send their children to camp. It costs about $500 for one child to spend a week at camp, but Camperships can bring the cost down to only $75.

"This program helps so much because it’s these kids that need to be here and will benefit the most from being at camp," Miller Nation said. It’s anticipated that this year about 300 children will benefit from approximately $100,000 in Campership funds.

The late Robert Wegman and his wife, Peggy, have been generous supporters of the program. It was through the couple’s generosity that the camp’s "Big House" building was knocked down in 2007 and replaced with what is now called the "Wegman House." The availability of this facility has provided more opportunities for off-season programs offered through various parish and youth groups, as well as adults participating in weekend learning and education opportunities.

Camp Stella Maris provides a very calming and peaceful environment with staff members who genuinely love their work. The importance of spirituality and youth development are demonstrated through the programs offered, and, according to Catholic Charities’ Diocesan Director Jack Balinsky, are an important part of what makes Camp Stella Maris "a treasure to the diocese."