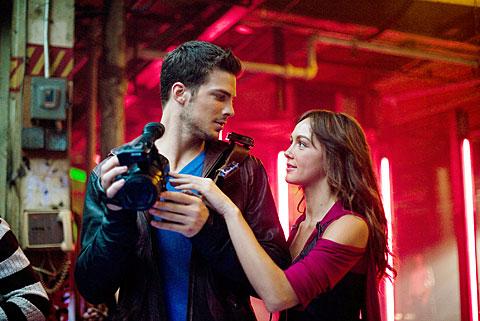 NEW YORK (CNS) — Three-dimensional effects enhance the precision choreography showcased in "Step Up 3D" (Disney). But the nimble numbers in this tale retreading familiar Hollywood themes of dream fulfillment and the self-selecting circle of friends as do-it-yourself substitute family are interspersed with flat-footed dialogue, a creaky plot and some provocative moves and lyrics.

This third installment of the street stomping franchise, which began with 2006’s "Step Up," shifts the setting from Baltimore to New York and focuses on Luke (Rick Malambri), the charismatic and caring leader of a Gotham dance crew called the Pirates. Discovering, in rapid succession, the hoofing gifts of New York University freshman Moose (Adam G. Sevani) and nightclub denizen Natalie (Sharni Vinson), Luke recruits them for the group, taking slightly nerdy engineering student Moose under his man-of-the-world wing while quickly succumbing to Natalie’s charms.

Luke, we learn, needs all the help he can get to win the upcoming, multi-round dance championship called World Jam, the proceeds from which will forestall foreclosure on the loft where he and the Pirates live and practice. But Moose is plagued by academic and amorous distractions, the latter caused by his high school best bud and fellow NYU frosh Camille (Alyson Stoner), who secretly yearns to be more than just pals, while Natalie — despite her sensitive support for Luke’s potential as a would-be filmmaker — is not, alas, all she seems.

Also hindering Luke’s quest for the World Jam prize money is former friend-turned-rival Julien (Joe Slaughter), the scheming, underhanded frontman for the Pirates’ main opposition, the Samurai. Inept storytelling aside — oh, no, Moose’s big test is the same night as the next World Jam match! — there’s a generally buoyant feel to the proceedings in director Jon M. Chu’s follow-up to his 2008 feature debut "Step Up 2: The Streets," best exemplified perhaps by a sidewalks-of-New York set piece shared by Moose and Camille that cleverly evokes classic Tinseltown fare of the Astaire-Rogers and Gene Kelly variety.

Both of the main romantic relationships are wholesome, straying no further than Luke and Natalie’s occasional dance-floor clinch. And the passing flashes of humor in Amy Andelson and Emily Meyer’s script — several of them playing on the stereotype of the hard-boiled Gothamite — mostly hit the mark, though some viewers of faith may be put off by a joking application of the phrase "What would Jesus do?"

The film contains at least one use of the S-word, occasional crass language, a mildly irreverent joke and scenes of moderately suggestive dancing. The Catholic News Service classification is A-III — adults. The Motion Picture Association of America rating is PG-13 — parents strongly cautioned. Some material may be inappropriate for children under 13.