Step Up All In - Catholic Courier 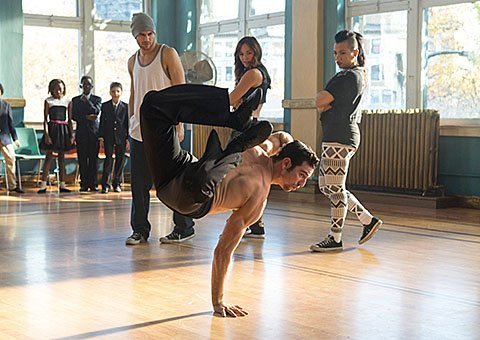 Ryan Guzman, Briana Evigan, Parris Gobel and Christopher Scott, front, star in a scene from the movie "Step Up All In." The Catholic News Service classification is A-III -- adults. The Motion Picture Association of America rating is PG-13 -- parents strongly cautioned. Some material maybe inappropriate for children under 13.

NEW YORK (CNS) — Completists of the "Step Up" franchise may find the fifth outing in the dance-showcasing series, "Step Up All In" (Summit), enjoyable. Others will wonder where the plot went.

Intricate storylines have never been the goal in these films, in which scrappy, multiethnic dance crews seek an escape from their workaday existences by entering lucrative competitions. The series is a happy fantasy with a relentlessly positive — and basically moral — milieu. It’s all about the kids showing off their moves.

"There’s a magic that happens when you dance," Sean Asa (Ryan Guzman) says in the opening voice-over. "The world is in synch, and for one perfect moment, you feel totally alive."

So we get it: Gotta dance! But director Trish Sie and screenwriter John Swetnam come up hugely short on dialogue to stitch the terpsichorean segments together. And what there is of conversation is stoutly cliched.

As the movie begins, Sean and his team, reduced to auditioning for commercials, have washed out all their prospects in Los Angeles. So Sean’s fellow dancers abandon him, returning to their hometown, Miami.

More or less undaunted, Sean finds a new dream online with "The Vortex," a reality-TV competition in Las Vegas hosted by Alexxa Brava (Izabella Miko). The winners of "The Vortex" will be rewarded with a guaranteed three-year contract at a Sin City hotel.

Within no more time than it takes to call out "five-six-seven-eight," Sean reunites with friends Moose (Adam Sevani) and Andie (Briana Evigan). Together, they assemble a new crew that features spectacular choreography, chic costumes — and the occasional mild argument.

There’s pluck, there’s moxie, there’s the old know-how, and sometimes someone blows out a knee or loses their nerve. But where there’s a tapping toe, it seems, there’s always a way.

Mature adolescents should have no problem with any of this, other than feeling deprived by the skimpy script.

The film contains fleeting sexual banter and at least one instance of rough language. The Catholic News Service classification is A-III — adults. The Motion Picture Association of America rating is PG-13 — parents strongly cautioned. Some material may be inappropriate for children under 13.