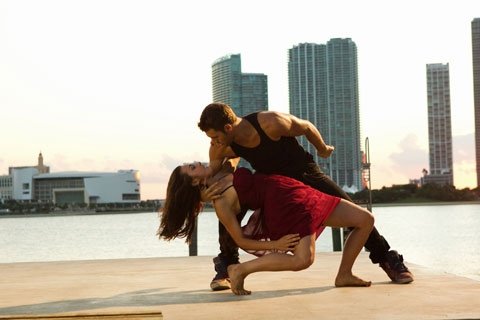 NEW YORK (CNS) — One adage holds that it’s best to stick to what you’re good at. It’s too bad screenwriter Amanda Brody didn’t take that advice on board when writing "Step Up Revolution" (Summit).

This fourth installment of the steamy dance and romance franchise — which began with 2006’s "Step Up" — continues to showcase the kind of top-notch choreography to which fans who dig fine shindigging have become accustomed.

Instead of providing a light plot to match the lively steps of the dance numbers, though, "Revolution" wanders off into risible pretentiousness. Stony-faced exchanges about protesting this and that and "breaking the rules" are more likely to make audiences cringe than reflect.

Throw in some risque routines — as well as a few turns of phrase too salty for the youngsters who would otherwise probably enjoy this outing the most — and the fun is dampened still further.

The hackneyed plot focuses on Miami urbanite Sean (Ryan Guzman). Along with his best friend since childhood, Eddy (Misha Gabriel), Sean runs a flash-mob group known — imaginatively — as "The Mob."

Their version of the fad sees this ensemble of highly skilled dancers, musicians and artists suddenly appearing out of nowhere, providing their chosen audience with a jaw-dropping performance to be recorded on cell phones and immortalized on YouTube, and then vanishing.

Pouty Em is busy rebelling against her millionaire father, Bill (Peter Gallagher), who, sensibly enough, wants her to abandon her long-shot dreams of becoming a professional dancer and go back to college.

Geez, Dad, what are you thinking?

When they discover that Bill — heartless capitalist that he is — plans to redevelop local land and raze their downscale neighborhood in the process, the truculent troupe, Emily included, go into Occupy mode. They plan a campaign of "protest art" to fight against the forces of conformity. Ostensibly of-the-moment references to social media and online hits, alas, fail to make this story any less stale than it sounds.

So in lieu of a fun-filled whirl across the dance floor, Brody and first-time director Scott Speer give us a surfeit of half-baked political posturing and self-indulgent sentimentality.

While the relationship between the two leads remains wholesome, that’s not an adjective that could be used to describe the pseudo-sexual style of public grinding they favor. They leave no room for daylight, much less the Holy Spirit.

The film contains much highly suggestive dancing, a single censored rough term and occasional crude and crass utterances. The Catholic News Service classification is A-III — adults. The Motion Picture Association of America rating is PG-13 — parents strongly cautioned. Some material may be inappropriate for children under 13.