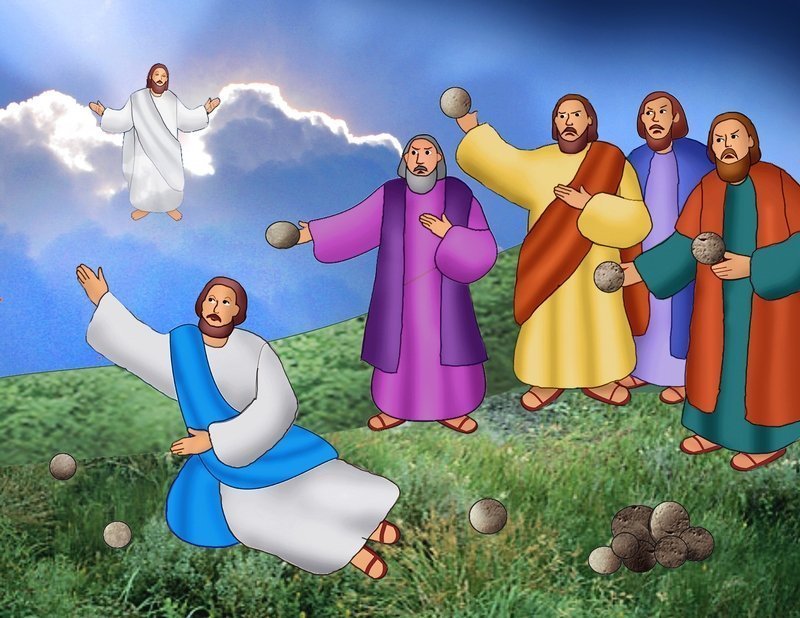 Stephen dies for preaching about Jesus

Stephen dies for preaching about Jesus

As the number of new Christians grew, the apostles needed help so they could spend more time praying and sharing the word.

Seven good men who were filled with the Holy Spirit became the apostles’ assistants. One was a man named Stephen.

Stephen worked many wonders and signs among the people. Some of them would try to debate with Stephen, but he was so wise that he always won the arguments.

Some of these people didn’t like Stephen and wanted to do him harm. So they started to spread lies about him.

“We have heard him speaking blasphemous words against Moses and God,” they told everyone.

These lies made the people, elders and scribes so mad that Stephen was seized and brought before the Sanhedrin, which was the ruling body of Israel.

False witnesses lied to the Sanhedrin about Stephen.

“This man never stops saying things against (this) holy place and the law,” the false witnesses said. “For we have heard him claim that this Jesus the Nazorean will destroy this place and change the customs that Moses handed down to us.”

“Is this so?” the high priest asked Stephen.

Stephen answered by giving a talk about God and all that the Lord had done for the people of Israel. He talked about Abraham, Isaac, Jacob, Joseph and Moses. He talked about the captivity in Egypt. And he reminded all who heard that the Israelites were known for disobeying God and his laws.

“You stiff-necked people, uncircumcised in heart and ears, you always oppose the holy Spirit; you are just like your ancestors. … They put to death those who foretold the coming of the righteous one, whose betrayers and murderers you have now become. You received the law as transmitted by angels, but you did not observe it.”

The people became so angry at Stephen that they dragged him out of the city to stone him to death.

As he was being killed, Stephen cried out, “Lord Jesus, receive my spirit.”

Just moments before he died, he fell to his knees and asked God to forgive the people for their sin.

1. Why did the apostles need help?

2. Whom did Stephen appear in front of?

Before Jesus returned to his Father in heaven, he appeared to his apostles one last time. It was then that Jesus shared some special news.

In Luke 24:44-49, Jesus explained to his friends the meaning of the words he had spoken to them before he died and was resurrected. He told them that everything written in Scripture about the Messiah had to be fulfilled — how he would suffer and die and rise again three days later, and how “repentance, for the forgiveness of sins, would be preached in his name to all the nations, beginning from Jerusalem.”

Jesus said that the apostles would be his witnesses. And he promised to send an advocate to help them in their ministry. That advocate — or supporter — was the Holy Spirit.

He also told his friends to stay in Jerusalem until he had sent the Holy Spirit upon them.

The Lord then led his friends as far as Bethany. He raised his hands and blessed them. As he blessed them, he was taken up into heaven.

The apostles were filled with joy. When they returned to Jerusalem, they could always be found in the temple praising God.

St. Isidore (d. 1130) was born in Madrid, Spain. His family was poor, and when he was old enough, he became a farmworker for a wealthy resident of Madrid.

The saint would get up early to go to church and then do his work. He talked to God all day long while he plowed the fields. He gave generously to the poor, even though he was poor himself.

It is said that one winter, on his way to get a bag of corn ground, he fed half of the kernels to some hungry birds. By the time he reached his destination, his sack was still full of corn. And when it was ground, the corn made double the amount of flour than usual.