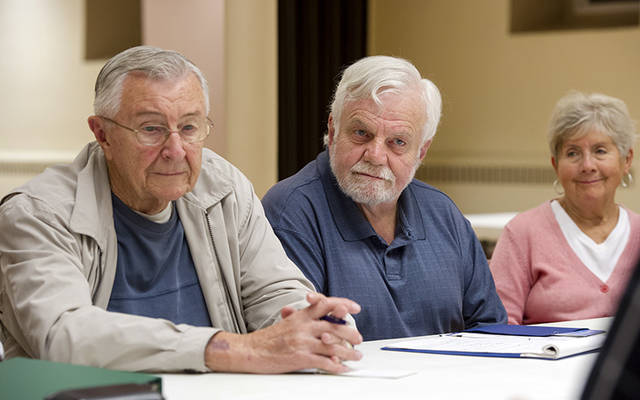 Ellen Keough’s new acquaintances in recent years have included an older, homebound woman who was new to the Tioga County area, and another woman who was in hospice care.

Through their roles as Stephen ministers, Keough and Reichold assist people facing a variety of life challenges. Yet they adapt to each circumstance by applying a pair of basic, yet vital qualities: a good set of ears and the desire to follow Jesus’ edict of loving one’s neighbor.

Stephen Ministry has a lengthy and valued history in Blessed Trinity/St. Patrick parishes, where Keough and Reichold are among approximately 20 lay ministers currently offering spiritual and emotional support for folks in need. The ministry was begun in 1985 at Apalachin’s St. Margaret Mary Church as a branch of an international initiative founded 10 years earlier by Dr. Kenneth Haugk, a Lutheran minister and psychologist from St. Louis, Mo.

Stephen ministers are available at St. Margaret Mary as well as all three of the other Blessed Trinity/St. Patrick churches: St. John the Evangelist, Newark Valley; St. James, Waverly; and St. Patrick, Owego. The parishes’ Stephen Ministry leaders pair ministers with individuals known as “care receivers,” who either come forward or are identified through referrals. Ministers then work one on one with their care receivers — men with men and women with women — by making personal visits and/or phone calls for varying lengths of time, observing strict privacy.

Care receivers are typically experiencing some sort of loss, such as the death of a loved one, failing health, or the end of a marriage or job. Other potential circumstances are loneliness, depression, major life transitions, parenting issues, traumatic experiences and spiritual crises. According to Reichold, who has been a Stephen minister for approximately 20 years, his main mission toward care receivers is “to be a friend — just to be there and let them know somebody cares about them.”

“Listening is a big part of it. We also will pray with the people,” said Keough, who became a Stephen minister in 2010 and serves on the three-person Blessed Trinity/St. Patrick leadership team along with Janice Hess and Mary Ann Cascarino.

Keough observed that Stephen ministers aren’t necessarily called upon to fix the problems they encounter, but they can provide encouragement while care receivers work things out for themselves: “We’re just there to be a friend walking with them.”

All Stephen ministers undergo at least 50 hours of intensive training so that they can offer solid spiritual and emotional care while building trust. Keough added that a Stephen minister also must be able to detect when a care receiver should get professional help, making a referral if necessary.

Stephen Ministry operates in more than 170 Christian denominations and 30-plus countries, according to the ministry’s website. Blessed Trinity and St. Patrick are the only Southern Tier parishes offering Stephen Ministry at this time; however, Reichold said that any parish could benefit from having the ministry — particularly the priests.

“They’re all overworked now,” he remarked.

“We can kind of multiply how many people are served,” Keough added.

Although Stephen ministers have a lot to offer, Keough and Reichold pointed out that they receive benefits, too, through the bonds they form with their care receivers.

“You develop a friendship,” Keough said, remarking that if it hadn’t been for Stephen Ministry, “How would I have met them otherwise?”

Reichold said that he enjoys “the satisfaction of doing the Lord’s work in helping people,” yet also values the insights that care receivers pass along to him about coping with life’s issues.

“They teach me things. They all give me something, too,” he said.

EDITOR’S NOTE: Those wishing to contact a Stephen minister in the Blessed Trinity/St. Patrick area may call 607-687-1068.