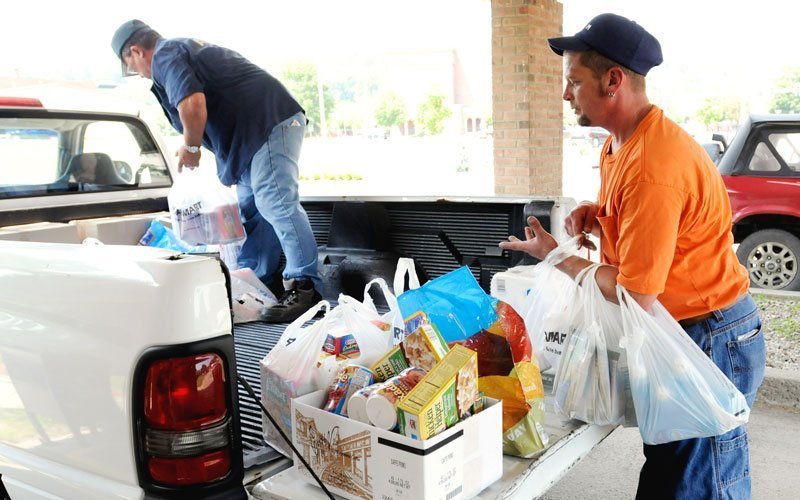 EDITOR’S NOTE: This is the fourth in a series of occasional profiles on Catholic Charities agencies and ministries in the Southern Tier.

Meeting the needs of Steuben County residents might, at times, feel like trying to cover an entire state. There’s good reason for that, according to Sue Bozman.

Bozman, who serves as development director of Steuben County Catholic Charities, noted that the county — which covers 1,393 square miles — is actually bigger than Rhode Island, which only takes up 1,045 square miles. In fact, Steuben is more than twice as big as the next-largest county in the 12-county Rochester Diocese: Cayuga is second at 693 square miles, and Monroe County is third at 659.

Serving such a spread-out geographic area is a daunting task for Catholic Charities, especially in this day and age of rising fuel and food costs.

“We’re seeing people come to the door who never came to the door before,” said Laura Opelt, executive director of the Steuben agency. She said the most visibly affected people are families with small children and senior citizens on fixed incomes.

The good news is that Catholic Charities is increasing its presence around the county to address the escalating needs. On June 30 in Hornell, the agency opened its third Turning Point office. It joins the Turning Point facility that was founded two years ago in Corning and the original Turning Point that opened in 1998 in Bath.

Turning Point offers an array of services including food; short-term financial help in such areas as utilities, shelter, prescription/medical needs and transportation; financial counseling; and referrals to other resources and support services. The program addresses three critical areas: serving immediate needs; assessing ongoing needs to help prevent financial crises from reoccurring; and guiding people toward self-improvement. Within its ministry Turning Point addresses such related issues as housing/homelessness and nutrition education.

Laura Gustin, Turning Point services director, said the Hornell office began working with clients almost immediately, and that its opening was timely for financially strapped clients who “can’t afford to be driving to Bath.” She said she’s thankful the office opened around the time gasoline prices rose above $4 per gallon, even though “we didn’t time it that way.”

Opelt, Bozman and Gustin emphasized the importance of Catholic Charities being located near other social-service entities that address vital needs, in order to provide a solid network in what Opelt termed “a critical point of entry” for people who are impoverished, uninsured and/or underinsured. For example, Hornell Turning Point is located in a St. James Mercy Health medical office building; Corning Turning Point is in the same location as the Corning Community Food Pantry; and Bath Turning Point shares space with Health Ministry of the Southern Tier as well as Steuben Catholic Charities’ main office.

The Catholic Charities ministries enjoy collaboration between health-care agencies, churches of various denominations and other community organizations. For instance, a senior-housing project in Hammondsport, which began construction a couple of months ago after being awarded a major state grant in 2007, is being administered by Steuben Churchpeople Against Poverty, for which Opelt serves on the board of directors. Also crucial to the overall effort are a wide range of financial resources, from the United Way and grant-writing to fundraisers, business support and private donations.

“Without that kind of response, we couldn’t do it,” Opelt said. “The way we get things done is by working with the community and ecumenically. We don’t do anything (by) ourselves.”

Further information about Steuben Catholic Charities may be found by visiting www.catholiccharitiessteuben.org. The main office in Bath is located at 23 Liberty St. Call 607-776-8085.