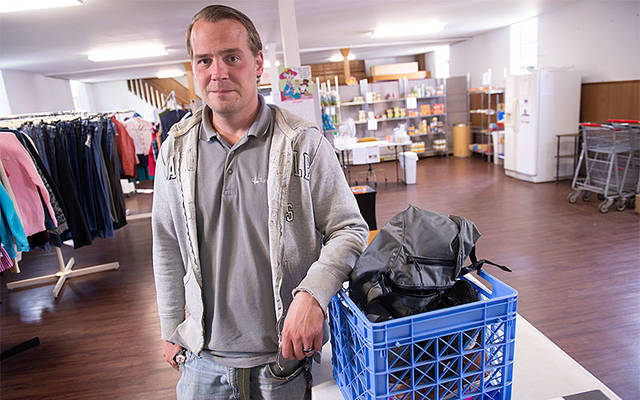 CANISTEO — Overlooking shelves of food and racks of clothing, a large photograph of Mercy Sister Susan Cain is easily visible on a wall of Steuben County Rural Ministry.

Steve Olix recalls the exact date the picture went up — May 29, 2019. That same day, Sister Cain was honored with a memorial Mass at Hornell’s St. Ann Church and remembrance gathering at the Canisteo Fire Hall.

Sister Cain, who died May 6 at age 81, was the rural ministry’s longtime director, devoting herself to the area’s poor and serving as the face of the ministry by warmly welcoming clients and engaging community members for volunteerism and donations.

“A lot of people call this place ‘Sister Susan’s,’” remarked Tess McKinley, former director of Turning Point, a division of Catholic Charities of Steuben that oversees the ministry.

“She could look at you and just know you need more help than you’re asking for. And she would just give and give and give,” said Olix, who serves as Turning Point’s rural coordinator.

Sister Cain came to the Canisteo ministry in 2000, following 28 years of teaching at Elmira Notre Dame High School. She was only the third director in the history of the ministry, which was established by the Rochester Sisters of Mercy in 1980. The other directors were Sister Margaret Louise Snider (1980-87) and Sister Mary Conleth Kennedy (1987-2000).

Although Sister Cain stepped down as director in 2013, she continued to be highly involved with the rural ministry. In fact, she served in Canisteo right up until this past March — during her 62nd year as a Sister of Mercy — when she contracted pneumonia from which she never recovered.

Today, the ministry carries on Sister Cain’s spirit of giving, addressing a vital need in southwestern Steuben County — a largely isolated area where other social services are lacking and many residents are without transportation. McKinley said that in 2018, the ministry’s staff and volunteers provided food to 1,785 individuals from 1,069 households as well as 2,529 pieces of material items, including household goods and clothing. In addition, Steuben County Rural Ministry helps folks meet expenses related to travel, utilities and housing. The ministry also provides information and referrals for medical and dental care, counseling, prescriptions, food stamps and other services.

Clients are spread over a vast region: McKinley — who left Catholic Charities in mid-September to become Steuben County director of Cornell Cooperative Extension — noted that the county, at 1,404 square miles, is larger than the entire state of Rhode Island. However, at approximately 96,000 people, Steuben has only 10 percent of Rhode Island’s population. Olix added that about 14,000 of the county’s residents are at or below the federal poverty level, and Turning Point reaches 6,000 of them.

“Our numbers are always going up,” he said.

The rural ministry has been located at 34 W. Main St. since 2005, in the former St. Joachim Church that closed one year earlier. In 2013, the ministry became an affiliate of Catholic Charities, a development that has enabled the facility to offer a wider array of programming and services. In fact, McKinley and Olix said that Turning Point is looking to relocate Steuben County Rural Ministry from its current site — which is owned by Our Lady of the Valley Parish — because the building has grown too small for the ministry’s current needs and is not handicapped accessible.

Olix asserted that “no matter where we go, we will continue to follow the mission” that Sister Cain so fervently carried out.