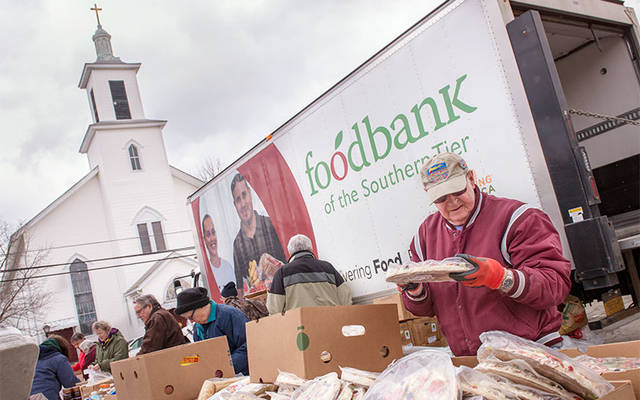 Over her many years of volunteering at the Dansville Ecumenical Food Pantry, Betsy Sullivan has had her share of heart-tugging encounters with folks in need.

“Some will say, ‘I don’t have anything in my house to eat. Can you help me?’” said Sullivan, who serves as the pantry’s director. “People that come through are so thankful.”

The Dansville facility is among some notable hunger-relief efforts by Holy Family Parish, which provides church space as well as volunteers at three of its four worship sites in southern Livingston and northern Steuben counties.

On Holy Family’s northern end is St. Mary Church, where the Dansville pantry occupies the former school’s basement. It is open from 9 a.m. to noon each Monday, Wednesday and Friday and has existed at its present location since the early 1990s, according to Sullivan. Andrea Davis, another coordinator, said the pantry serves nearly 500 individuals per month.

At the parish’s southern tip, the Cohocton Community Food Pantry sets up in St. Pius V Church’s Sturmer Hall on the first and third Wednesday of each month, with hours from 1 to 3 and 6 to 7 p.m. Margie Adams, the pantry’s director, said the operation was established five years ago at St. Pius V after a similar outreach in nearby Avoca closed.

“It’s such a low-income-based township. We just found there were many needs in this community,” Adams said, noting that approximately 50 families are served monthly, with numbers rising in the summer when children are not in school.

And in Wayland, midway between Dansville and Cohocton, a mobile pantry distributes food in the parking lot of St. Joseph Church. The truck arrives on the second Wednesday of the month, with registration at 10:30 a.m. and distribution taking place from 11 a.m. to noon. Chris Wensel, who coordinates the initiative, said a truck has been coming to St. Joseph since 2010. She added that 67 households received food on May 9 when the mobile pantry last visited, although the monthly number has, at times, exceeded 100.

“We have all age groups come — young people trying to get by on their own, elderly,” said Wensel, who — like Sullivan and Adams — is a parishioner of Holy Family.

The mobile pantry in Wayland is provided by Food Bank of the Southern Tier, an agency of Catholic Charities that supplies food for the Cohocton Community Food Pantry as well. Meanwhile, the Dansville facility is bolstered by deliveries from Foodlink, a Rochester-based food bank.

Much of Holy Family’s outreach operation also depends on donations of food and cash from local businesses and individuals. All three initiatives are completely staffed by volunteers and done in conjunction with other area churches. The staffs in Cohocton and Dansville are ecumenical — “We have a lot of great volunteers,” Adams stated — and Wensel noted that leftover goods from the Wayland food truck are taken to a nearby pantry at Lighthouse Wesleyan Church.

“Nothing goes to waste,” she said.

Adams, Wensel and Sullivan all acknowledged the importance of feeding the hungry in their own communities; in fact, Sullivan has been active with the Dansville pantry since it was housed in the American Red Cross building more than 25 years ago.

Reflecting on her lengthy commitment, Sullivan said, “I think, basically, God has been really good to us — me, my husband, my family. This is one of those things I could do to say thank you.”