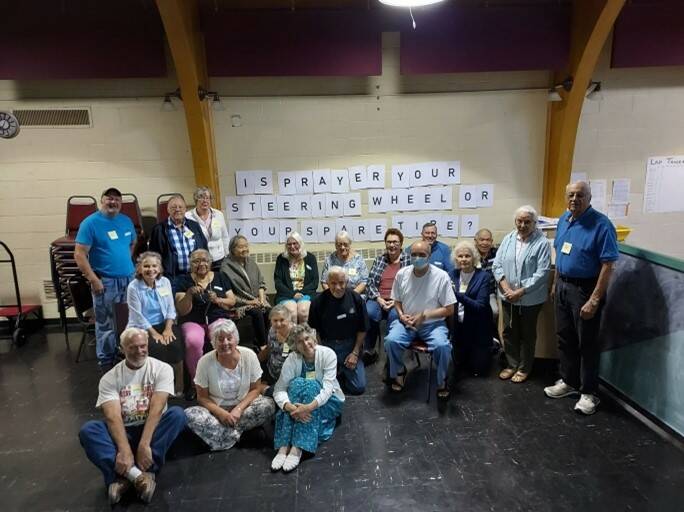 What’s more fun than sending your child off to summer camp? Going the camp yourself!

St. John Vianney Parish in Bath hosted its first-ever Adult Vacation Bible Camp Aug. 15-19. More than two dozen adults from three different parishes attended and, after playing their first game — a “Wheel of Fortune” takeoff — they learned that the theme for their week would be prayer and all the forms that it could take.

They explored praying through guided meditation; through sharing their prayers with others by taking balloons home with others’ prayer requests in them; by creating biblical tableau vivants (living portraits); and by exploring how to use A.C.T.S. (adoration, contrition, thanksgiving and supplication) as a framework for their prayers.

Puzzling out what their Catholic faith meant to them, they learned that sometimes it’s a little messy trying to fit their ideas and beliefs together with others’. They played Bible “Password,” “Where is that in the Bible?” and “Name that Hymn.” Bringing depth to the week, Deacons Robert Colomaio and Thomas Jack contributed some of their knowledge to the discussions.

There also were lots of prizes and snacks and plenty of opportunities for fellowship.

Topping off the week, Deacon Dan Reynolds, from the Diocese of Syracuse, brought his “Divine Comedy” show to campers and other parishioners. He shared some of his thousands of religious cartoons with the audience, and he also created an original piece of art right before campers’ eyes.