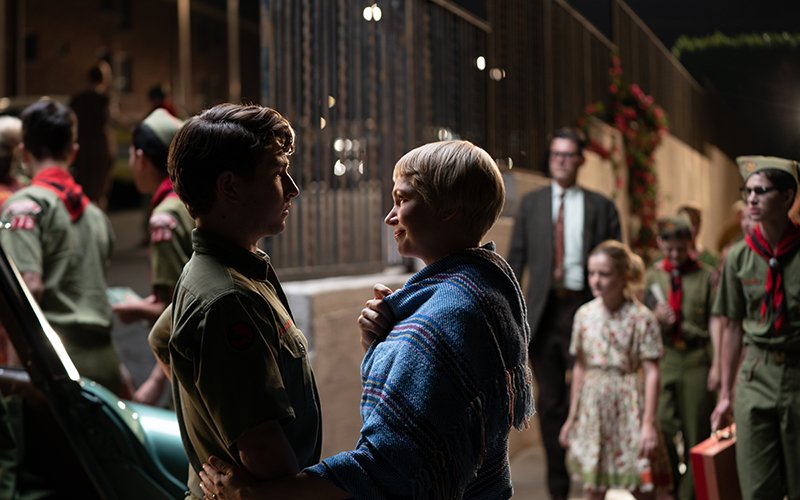 NEW YORK – An alternate title for director and co-writer Steven Spielberg’s emotionally rich autobiographical drama “The Fabelmans” (Universal) might have been “A Portrait of the Helmer as a Young Man.” One problematic subplot aside, Spielberg’s nostalgic look back at his own formative years, penned with Tony Kushner, is a beautifully crafted and touching delight.

Set in the 1950s and ’60s, the movie recounts the childhood and adolescence of Spielberg’s fictional counterpart, Sammy Fabelman (Gabriel LaBelle). After falling in love with the movies at an early age, Sammy is determined to become a filmmaker.

He’s supported in this ambition by his artistically inclined pianist mother Mitzi (Michelle Williams). But his dad, Burt (Paul Dano), a gifted engineer involved in the development of modern computers, dismisses the idea as impractical.

Burt’s best friend and business partner Bennie Loewy (Seth Rogen) is a constant presence in the Fabelman household. Although clever and lighthearted on the surface, Bennie harbors a secret, the revelation of which unfolds in a sequence that is both masterful and memorable.

Christian viewers may find a stumbling block in the person of Monica Sherwood (Chloe East), the fellow high school student with whom Sammy eventually becomes romantically involved. Her obviously vain aim of converting Jewish Sammy to her own faith is played for laughs.

More discomfitingly, Monica’s eccentric relationship with Jesus, images of whom abound on the walls of her bedroom, is tinged by vague eroticism. This fact is also presented in a humorous light – but will likely inspire more frowns than smiles among believers.

Additionally, the script’s message about following your heart takes on, at moments, a quality of reckless romanticism. Thus, the yearning for self-fulfillment at any cost that caused so much social upheaval in the Woodstock era and afterward is, in the case of at least one character, showcased in an unbalanced and insufficiently critical way.

The remainder of the long running time, however, finds vivid characters and sharp writing blended with pitch-perfect acting in a thoroughly winning recipe. Thoughtful yet crowd-pleasing, subtle but accessible, “The Fabelmans” is, overall, a remarkable achievement and a signal work of popular art.

Look for: A humane and compassionate tone.

Look out for: Some irreverent humor, mature themes, drug use, numerous profanities, about a half-dozen milder oaths, at least one rough term and occasional crude and crass talk.