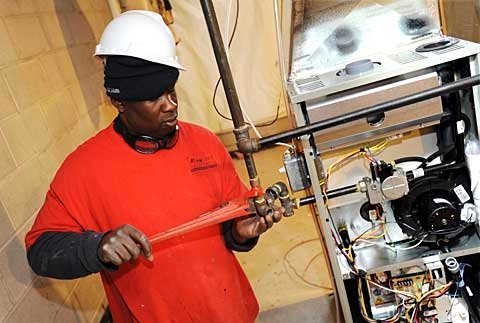 ROCHESTER — When Gabriel Perez learned that his family’s apartment in a duplex on Fulton Avenue would get a new furnace and other upgrades to improve its efficiency, he said he was thrilled.

"It’s a good way to save dollars," Perez added during an interview Dec. 13 at that apartment, whose floors were covered in plastic as the weatherization crew from Action for a Better Community completed its work on the house. ABC recently received a $10.9 million grant from the federal American Recovery and Reinvestment Act to complete such projects.

Perez, who recently graduated from SUNY Brockport, and his mother have lived in the apartment for the past five years. He said that the federal investment in these types of projects benefits all parties involved.

"It’s a win-win situation," he said. "Everyone wants to have warm homes in the winter months."

Their apartment is located in one of several houses on the street near Lake Avenue that ABC is improving with new furnaces, air sealing and weather stripping, said Francis Torres, project manager. The houses, which are owned by Providence Housing Development Corp., date back to about the mid-1990s, she said. Providence — an affiliate of the Diocese of Rochester — develops, finances and manages quality affordable housing programs for individuals and families throughout the diocese’s 12 counties, according to www.providencehousing.org.

One of the key components of ABC’s weatherization program is owner investment, said Rodney Washington, director of ABC’s energy-conservation program. Typically, owners invest about 25 percent of the total cost of the improvements as part of the program that ABC has had in place for decades.

But with the federal stimulus funds it received, the agency — which was created to fight poverty in the city in the 1960s — has seen such projects grow in scale, Washington said. Bigger projects include stripping off siding to add insulation, installing new hot water tanks and replacing windows, Torres noted.

"Demand is high," said Aaron Wicks, director of ABC’s planning and evaluation department. "It’s a program we’ve been very proud of. We feel there’s a lot we can do with it."

Since the stimulus funding has allowed ABC to complete more projects, Providence and its tenants living in its city properties benefitted, said Karen Staertow, development associate for the housing agency. She added that ABC crews are working on projects whose volume and magnitude would have been very difficult for Providence’s budget to withstand.

"I’m very excited about it," Staertow said. "I thought, ‘Wow, we can do this.’ Use the program instead of be the program."

The owner investment was worthwhile when one considers a furnace replacement could cost at least $1,000 and ABC is working on 18 such replacements in Providence properties, she noted. The gamut of improvements also include lightbulb replacements and duct sealing insulation.

"It’s saving us a lot of money," Staertow remarked.

ABC also is boosting energy efficiency in apartments in F.I.G.H.T Village on Ward Street and trying to finalize agreements at Pinnace Place and Green Knolls apartments, Washington explained. The work at those places would include boiler replacements, attic insulation, installation of new refrigerators and thermostats as well as adding new lighting and even shower heads at hundreds of apartments, he noted.

"Things like that which the tenant can benefit from," Washington added.

The stimulus funding is expected to end sometime next year, he said. If the agency is allowed to finish projects that have begun by the deadline, ABC could end up having improved the energy efficiency of 2,000 apartments and homes throughout the city, Washington remarked.

"The great thing about weatherization is it’s one of a very few grant … programs that clearly demonstrates a return on investment," Wicks said, with a return of $1.20 for every $1 spent. "It helps hundreds of people all at once … lower their energy consumption."

While the weatherization-assistance program received about 75 percent of the federal stimulus funds, the agency also was able to enhance or create new employment opportunities as well as branch out into the suburbs to help families dealing with poverty and hunger issues, Wicks added.

The outreach into the suburbs done through a pilot program called ABC Cares aims to connect people in need to services, he explained.

"Part of it is some people don’t want to acknowledge poverty is there and getting worse," even in the suburbs, Wicks said.

Although this portion of the funding ran out, he said that the agency was able to assist 147 families.

When ABC officials first learned the amount of the stimulus funding, they identified employment as an area where the agency could make a difference in the community, he explained.

With the funds, the agency provided skill-development training to 95 city residents, including youths, and offered 24 paid internships at ABC that led to six permanent full-time and four part-time hires, Wicks said. ABC also was able to expand its youth summer jobs program to include 140 students. The summer program usually serves about 45 teens, he added.

"Employment was the biggest piece because of the economic crisis we’re in," Wicks said.

With the federal funds, ABC also partnered with the city, Monroe Community College and the Urban League to create a specialized training program for workers to develop "green" construction skills, Wicks noted. It was so successful that MCC has applied for another grant to offer another session early next year.

Keith Crawford went through the training and has been hired by ABC to work on the weatherization programs. He learned about the training program from a friend.

"I feel good about the work," he said. "We’re helping people."

Because of its commitment to improve the quality of life for people in the community, Crawford added that he feels blessed to be working for ABC.