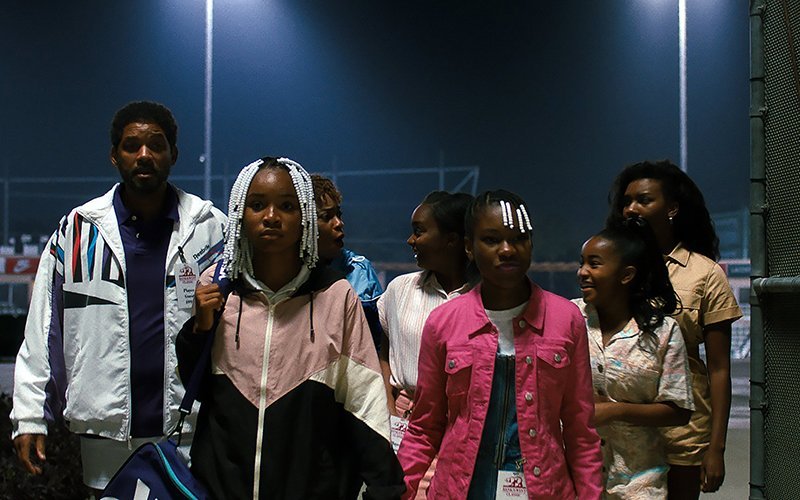 NEW YORK (CNS) — Will Smith aces it in “King Richard” (Warner Bros.). His vivid performance as the father of not one but two future tennis greats energizes this intriguing fact-based sports drama while the script, penned by Zach Baylin, promotes an array of positive values.

The stars in question are, of course, Venus (Saniyya Sidney) and Serena (Demi Singleton) Williams. Director Reinaldo Marcus Green’s film recounts how their dad — by turns determined and, as the nickname of the title suggests, domineering — overcame long odds to fulfill his dream of making his daughters world-renowned champions.

Among the obstacles barring his way are the meagerness of his economic resources, the dangers of life in Compton, the gang-ridden Los Angeles neighborhood his family inhabits, and the racism, both institutional and personal, he frequently encounters. But Richard also is hampered by the downsides of his own personality, especially his stubbornness and desire to control others.

These negative traits bring him into conflict with a duo of highly regarded coaches, Paul Cohen (Tony Goldwyn) and Rick Macci (Jon Bernthal), potentially jeopardizing Venus and Serena’s professional prospects. They also cause friction with his dedicated wife, Oracene, aka Brandy (Aunjanue Ellis).

Still, much of what Richard insists on from his girls — including academic excellence, self-discipline, thoughtful planning, relentless hard work on the court, and the proper balance of confidence and humility — will resonate with moviegoers. Both parents also provide a remarkable example of unflagging persistence in the pursuit of a seemingly improbable goal.

Part of the clan’s strength, the screenplay implies, comes from their faith as Jehovah’s Witnesses. Richard is shown saying grace and mentions regular attendance at a Kingdom Hall as part of the Williams’ lifestyle. Unsurprisingly, however, no specifically sectarian doctrines are advanced.

A generally upbeat, though overlong, success story, “King Richard” makes significant ethical points that grown-ups will appreciate. Some vulgar dialogue aside, moreover, there’s not much to prevent the sharing of those life lessons with older adolescents.

The film contains brief gun and physical violence, at least one instance each of profanity, milder swearing and rough language as well as a few crude and several crass expressions. The Catholic News Service classification is A-III — adults. The Motion Picture Association rating is PG-13 — parents strongly cautioned. Some material may be inappropriate for children under 13.