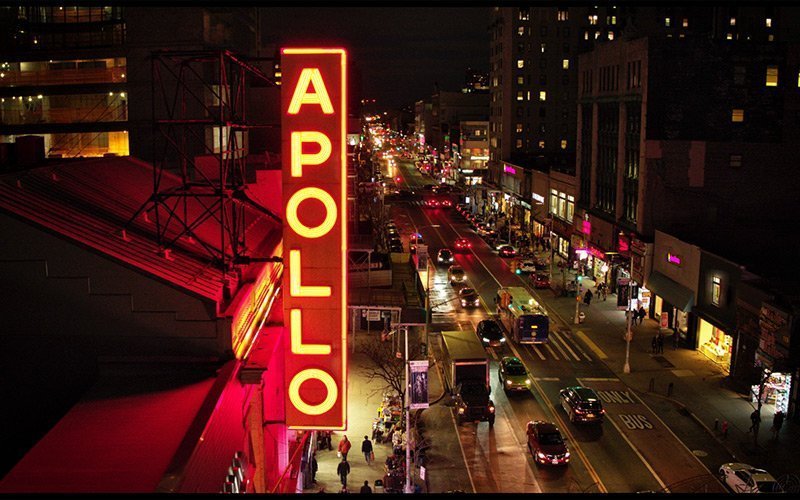 The Apollo marquee (Courtesy of HBO)

NEW YORK (CNS) — The last 10 minutes of “The Apollo” are wonderful. But, unfortunately, many viewers may abandon this otherwise unremarkable documentary, which premieres on the HBO pay-cable channel Wednesday, Nov. 6, 9-11 p.m. EST, long before its wrap-up.

Released to coincide with the 85th anniversary of the founding of the fabled Harlem theater, the film, directed by Roger Ross Williams (“American Prison”), chronicles its namesake’s history as a synecdoche for the experience of African Americans’ creativity in the performing arts.

The Apollo’s staging of a dramatic reading of Ta-Nehisi Coates’ acclaimed 2015 work “Between the World and Me” is the prism through which the filmmakers explore this legacy.

The book contains a series of letters the author wrote to his then-15-year-old son, Samori, about growing up as a black man in a racially charged time. It was written in the wake of Coates’ loss to murder of his friend and Howard University schoolmate Prince Jones.

Footage of actors preparing for the event is intertwined with archival video. Interviewees include pop culture historians, current and former theater owners, employees and numerous performers — Jamie Foxx, Leslie Uggams and Gladys Knight among them.

Unlike the Cotton Club, another popular Harlem nightspot from the period, the Apollo not only showcased African American talent, it also admitted black patrons. (The Cotton Club did eventually integrate its audiences.)

The filmmakers note that, as the creator of its legendary amateur night, Ralph Cooper deserves much credit for the Apollo’s popularity. One of those who made their debut on amateur night was the great jazz singer Ella Fitzgerald, and rehearsals for a celebration marking the centennial of her birth in 1917 are shown.

Along with singers such as Fitzgerald, big bands, including Duke Ellington’s, were featured. So, too, were comics, like Redd Foxx and Richard Pryor. But it was the iconic funk and rhythm-and-blues artist James Brown who became the performer most closely associated with the venue. He appeared there close to 200 times.

The Apollo gradually fell into disrepair, however, and its management declared bankruptcy in 1977. Former Manhattan borough president — and attorney for Malcolm X — Percy Sutton purchased the theater in 1985.

During Sutton’s ownership, the popular and long running TV program “Showtime at the Apollo,” which introduced hip-hop artists such as Public Enemy to mainstream audiences, was launched. But the theater remained a losing economic proposition until 1991 when the state of New York took it over.

Given that “The Apollo” includes occasional vulgar language, as well as discussions of violence, urban unrest, racism and transvestism, it’s best for adults — though some parents may consider the program acceptable for older teens. Discerning viewers of whatever age will note that Williams’ film lacks originality and depth of insight.

The idea that Redd Foxx and Pryor were comedic pioneers, for instance, isn’t exactly a revelation. Neither is Jamie Foxx’s observation that African American comedy is born of the people’s pain.

The documentary’s conclusion, by contrast, which features Angela Bassett and Common reciting Coates’ words, is vivid and compelling. Yet, for most in the audience, it will amount to a case of too little coming too late.