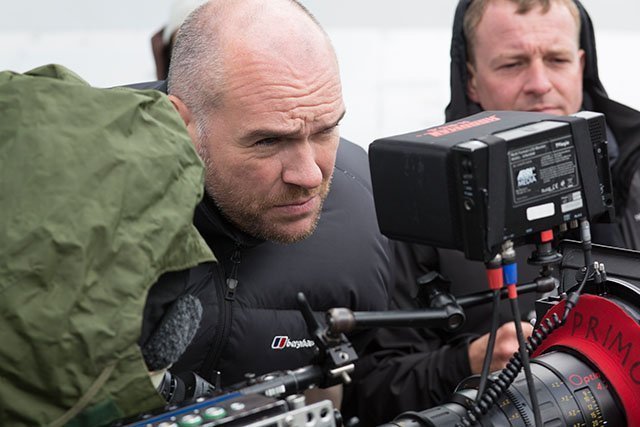 Director John Michael McDonagh is seen on the set of the movie "Calvary." The movie is about a priest who has been warned by an unrepentant penitent in the confessional that he will kill the priest a week from Sunday.

McDonagh challenged Gleeson, "If I write a script about a good priest, will you play him?" Gleeson answered, "Yes."

Now the challenge was McDonagh’s to write that script.

The result is "Calvary," which stars Gleeson as a priest who has been warned by an unrepentant penitent in the confessional that he will kill the priest a week from Sunday. The rest of the movie shows what the priest does, and does not do, as the threatened hour of reckoning approaches.

Both Gleeson and McDonagh grew up as Irish Catholics, although McDonagh’s faith is, by his own admission, less strong.

"I still believe there is something beyond or above us," he told Catholic News Service July 22 in Washington. He was in town as part of a promotional tour for the film, which opens Aug. 1 in New York and Los Angeles, and later in August in other parts of the United States.

"I went to Mass every week until I was 16. I was an altar boy," he added. "There was never any actual break. It was just one of those things. You become a teenager and you just stop going to Mass at one point."

Recent revelations of a long-standing period of unreported sexual and physical abuse by clergy and others have rocked the Irish church, and "all that moral authority is now gone," McDonagh said. He added that his own father, now 76, stopped going to Mass, "although my mother still goes, but you wonder how much is (because of) faith and how much is ritual."

This serves as the backdrop for "Calvary." Gleeson’s character, Father James Lavelle, recognizes that "priests have all been tarred with the same brush," McDonagh said. "But there are men who enter the priesthood who try to help their communities. And suddenly now they’re all being viewed with suspicion. They don’t all deserve it. But as the priest in this film, he recognizes that there is a lot of anger there, and someone has to take responsibility for what’s happened."

The man who threatens Father James says he had been raped by a priest every other day for five years. In another scene, Father James chats innocuously with one girl in a rural lane when her father pulls up behind them in his car, hustles the girl inside and insults the priest before glaring at him.

"I was mulling over trying to tell a story about a person who’s genuinely good — sincerely good. Because most films are not driven by those sorts of characters," McDonagh told CNS. "It’s usually (that) the hero of the movie is more of an antihero, he’s conflicted or he’s got a lot of problems in his back story. Or, what you find it’s usually the villain who drives the narrative and the hero reacts to that."

He added, "OK, we’ve got a good man. How do we drive the narrative? You surround him with an oddball collection of very idiosyncratic, oddball characters that he responds to and duels with. That’s what gave me a framework for the movie." One of those idiosyncratic characters is played by Chris O’Dowd, who played the unlikely male romantic lead in the 2011 comedy hit "Bridesmaids."

Despite some violence and harsh language, "Calvary" can be viewed as a redemptive film, McDonagh said, "whether you believe in an afterlife or not."