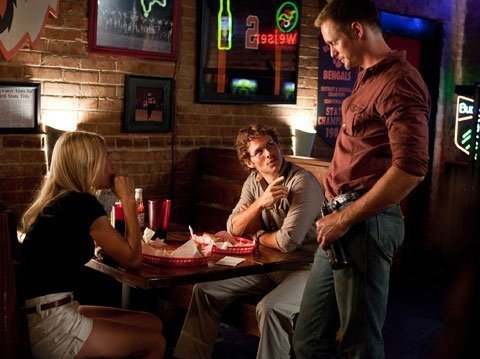 The setting in this version (also an adaptation of the novel "The Siege of Trencher’s Farm"), directed and written by Rod Lurie, has been moved from England to deepest Mississippi. David Sumner, the pacifist played by Dustin Hoffman at the center of the original, is now an amiable Beverly Hills screenwriter played by James Marsden.

Sumner and actress wife Amy (Kate Bosworth), recently the star of a TV series, move to her old family home in Blackwater, Miss., so that he can work on a screenplay about the Battle of Stalingrad in World War II. Blackwater is filled with leering drunks with short fuses, and the couple hires Charlie (Alexander Skarsgard), Chris (Billy Lush). Norman (Rhys Coiro) and Bic (Drew Powell) to repair their barn roof. Charlie is Amy’s embittered high school sweetheart, resentful of her success and her marriage.

All of this sets the stage for her sexual assault by Charlie and Norman and a hyperviolent extended showdown when Tom Heddon (James Woods), the surly high school football coach, finds that the Sumners are concealing Jeremy (Dominic Purcell), a slow-witted boy his teenage daughter, Janice (Willa Holland), has been pursuing. He and the four roofing boys speed to the house on a pickup truck, and the only question after that is how long it will take for David to "man up" and take them on.

The original film’s violence, shocking for its time, was intended to make a statement about what pacifists, or really any person at all, can become when reverting to primitive urges to defend their territory. This version is more like "Deliverance" without the banjo music.