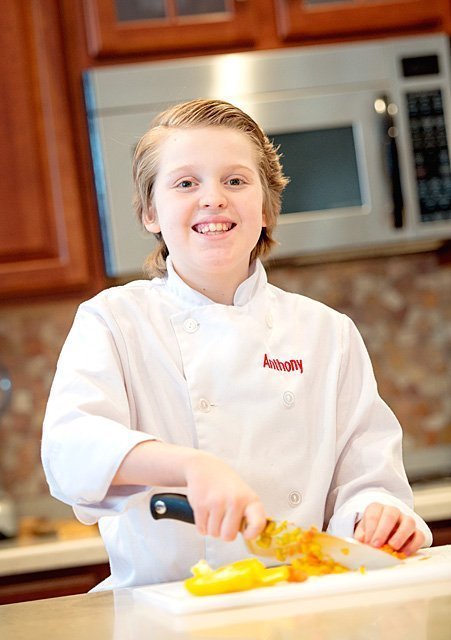 Anthony Smith, a sixth-grader at St. Rita School in Webster, recently competed in the Kids Baking Championship on the Food Network.

When Alicia Smith let her 3-year-old son, Anthony, roll meatballs on the tray of his high chair, she had no inkling that just nine years later, her son would be cooking gourmet meals with ease.

At the time she simply was trying to find a safe way to accommodate her young son’s request to help her cook dinner. Yet Anthony, who is now 12, said those early days in the kitchen with his mother sparked his deep passion for cooking.

"It just took of from there," remarked Anthony, a sixth-grader at St. Rita School in Webster.

Anthony’s skills in the kitchen gave him his first taste of fame this past February, when he was one of eight young participants in the Food Network’s "Kids Baking Championship." He was eliminated in the first episode, but his brief time in the limelight agreed with the budding chef, who hopes to one day host his own cooking show and own several restaurants.

He’s working toward that goal by taking private cooking lessons in his home with a professional chef from the New York Wine and Culinary Institute in Canandaigua, his mother said. The chef teaches Anthony new techniques every other week, and on the in-between weeks, Anthony has homework assignments and studies out of a textbook called The Professional Chef. Anthony pores over cooking magazines in his free time.

"When he reads at night before he goes to sleep he reads cookbooks in bed," Smith added.

Before boarding the school bus in the morning Anthony often hands Smith a list of ingredients he’d like her to buy so he can prepare dinner after school. Smith said she has no qualms about relinquishing her kitchen to a 12-year-old.

"When he’s in the kitchen he’s just so relaxed and at peace. You just see a difference in him. You can tell it’s his passion because he’s so happy," Smith said.

Anthony said he’s always found cooking to be a fun way to express himself.

"I like to cook because you get to show your creativity and put it on the plate," he explained.

Anthony strives to infuse each dish he cooks with his own personal touch. Sometimes that means creating his own sauce or tinkering with a recipe’s ingredients, and other times that means pairing a recipe he found in one cookbook with a recipe inspired by another source, he said. His current favorite meal to cook is pan-seared Tuscan sirloin over herbed couscous with braised carrots and a beurre rouge (red wine butter) sauce, said Anthony, who enjoys seeing the pleasantly surprised expressions on people’s faces the first time they try one of his dishes.

The young chef also enjoys sharing his love of cooking with people of all ages. On his website, www.chefanthonysmith.com, Anthony posts recipes as well as weekly cooking tips. He planned to participate in an April 25 cupcake-baking competition at Rochester’s Blessed Sacrament Parish, which he frequently attends with his family. He’s inspired many of his classmates at St. Rita to take up cooking, and in May he plans to teach cooking classes for students at St. Joseph School in Penfield. He’ll be teaching cooking classes at the Williams-Sonoma store in Eastview Mall sometime in the near future, and he’s also planning an event to raise money for the national No Kid Hungry Campaign, which is supported by "Kids Baking Championship" cohost Duff Goldman. And one day he hopes to attend the Culinary Institute of America.

"He’s driven, to say the least," Smith said of her son, who also is active in the Webster Youth Hockey Association. "He is going to go great places in life."

Smith discovered more evidence of her son’s ambitious nature during her family’s recent spring-break trip to Florida, when she was surprised to receive phone calls from three different publishing companies. After questioning Anthony, she discovered that not only was he writing a book, but he’d already started shopping it around to various publishers and providing his mother’s cell phone number as the best way to reach him.

"He’s gotten a lot of attention from many different places," she added.