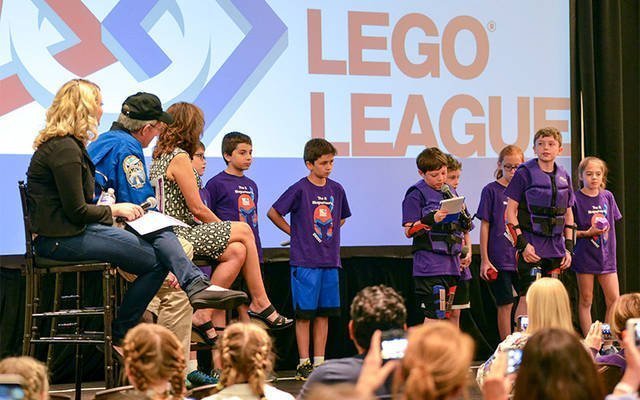 GATES — For eight students from St. Louis School in Pittsford, dodgeball has become more than just a game to play in gym class.

The sport inspired them to create Magnetic Dodgeball, an innovation project that earned them a trip to San Jose, Calif., June 30-July 2 to compete in the For Inspiration and Recognition of Science and Technology (FIRST) LEGO League Global Innovation Award.

The students’ journey to San Jose started in August 2018. That’s when they first met to brainstorm ideas on how to tackle the 2018-19 FIRST LEGO League theme of solving the challenges of long-term space flight. The fourth- and fifth-graders worked with doctors from the Mayo Clinic Aerospace Medicine program to create Magnetic Dodgeball, a game that would help astronauts prevent bone and muscle loss while in space.

The students — whose team took the name The Eight Magneteers — presented their innovation project at the FIRST LEGO League Qualifying tournament at McQuaid Jesuit High School Nov. 12, 2018, where they qualified for the regional competition with the “Most Innovative Project.” At the regional competition in December 2018, Magnetic Dodgeball was again honored as the “Most Innovation Project.” And this past April, the team was selected as one of 20 teams from a field of 40,000 to compete at the Global Innovation Award, FIRST Lego League’s world competition.

“I got a call, and then I called (assistant coach) Kristina Borrelli and I said, ‘Are you sitting down because we are going to San Jose,’” Brian Gallagher, The Eight Magneteers’ assistant coach, recalled in a June 25 interview with the Catholic Courier. “It was pretty crazy from there on out.”

After qualifying for the world competition, the team met with industrial designers at Kek Associates in Henrietta and manufacturers at Fieldtex in Brighton to develop their Magnetic Dodgeball prototype. The team received support from such local businesses as Rochester Magnets, which donated magnets, and Finnovation Inc., which donated 3-D printing services. Support also came from the St. Louis school and parish communities, Pittsford Town Supervisor Bill Smith, state Sen. Rich Funke and The National Dodgeball League.

“We were really thankful for all the support we received,” said Borrelli, who noted that the trip wouldn’t have been possible without the community’s assistance.

During the San Jose competition, The Eight Magneteers met student innovators from around the world, including young people from Estonia, Italy and Brazil. They also attended a variety of workshops, where they learned about patents, business plans and trademarks, and problem solving. They also had the opportunity to have lunch with a John Deere representative.

The focus of the event, however, was the project judging, during which the students presented Magnetic Dodgeball to two different panels and then went on stage for a larger presentation to three experts and the other teams in attendance. Among the experts was Dan Burbank, a retired NASA astronaut. The experts gave each team feedback and asked questions about the innovation project.

“I wasn’t super nervous,” Angelina Borrelli said about the presentation. “I felt pretty confident because I knew what I was saying and knew everyone’s parts and what I was supposed to do at certain times.”

“I enjoyed presenting Magnetic Dodgeball because that was the reason that we got there (to San Jose),” added Emmi Myers. “I was just really happy that we came up with an idea that got us this far.”

At the conclusion of the event July 2, the teams attended an awards ceremony where the teams from Brazil, Italy and California received cash awards to further develop their project prototypes. Though Magnetic Dodgeball wasn’t one of the winning prototypes, the young inventors took away some valuable skills for the future.

“I learned how to cooperate with my team, and I learned to never give up when things are hard,” said Angelina.

“The whole experience has exposed them to so many different things. Things that a year ago they weren’t really thinking about,” said Kristina Borrelli, The Eight Magneteers’ assistant coach. “I really hope they took away an increase in their self-confidence and their ability to try new things and be creative.”

The young inventors are still working on developing Magnetic Dodgeball, which Assistant Coach Kristina Borrelli said is patent pending. She also noted that students pledged in San Jose to be FIRST LEGO League innovation ambassadors, agreeing to attend robotics competitions and events to talk with other young innovators about their experiences with Magnetic Dodgeball.

Though the future of The Eight Magneteers is unknown, Angelina and Emmi are hoping to remain involved in robotics.

“I will do robotics next year,” Emmi remarked. “I’m hoping our experience (in San Jose) will bring more kids into the activity (of robotics) and we have a great idea next year that will hopefully bring us somewhere . ”