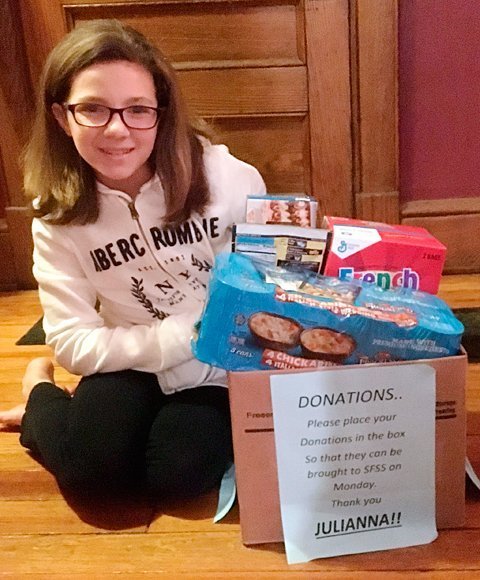 Julianna Plate, a fifth-grader at St. Francis-St. Stephen School in Geneva, recently asked guests at her 11th birthday party to bring nonperishable food items rather than gifts. She donated the food she collected to the Geneva Center of Concern's food pantry.

The corporal works of mercy have been the subject of much discussion and renewed attention at many Catholic parishes and schools during this Year of Mercy, which was proclaimed by Pope Francis and runs through November. Such discussions at Geneva’s Our Lady of Peace Parish and St. Francis-St. Stephen School recently motivated fifth-grader Julianna Plate to take action.

Julianna, who turned 11 on Feb. 24, asked guests at her birthday party to bring nonperishable food items to the party rather than gifts. She then donated the food items to the Geneva Center of Concern’s food pantry, where the items will be used to help families and individuals in need.

"Me and my mom gathered ideas, wrote them down on a piece of paper and … talked about how it would help the (community) and how it would make me feel when I would do something like this," Julianna said.

After debating the merits of various ideas, Julianna and her mom settled on the birthday party idea, in part because the party would take place just two months after Christmas. Like many children, Julianna had received quite a few gifts at Christmas, including a number of gift cards she had not yet redeemed, and she and her mother didn’t think she really needed more gifts.

"We are so thankful and so blessed. We have a roof over our heads and food to eat. (Julianna) agreed 100 percent," Plate explained. "There was a little note that went in everybody’s invitation and it did say that if a gift was a must, to please make it small, because I know that some people feel awkward coming to a birthday party without anything. Some people did bring little things for her, pens and pencils, stuff she could use for school."

"It was just overwhelming," she said.

After the party was over Julianna brought a box of donated food to school, where school and parish staff helped her get the box to the Geneva Center of Concern’s food pantry. Julianna said she was grateful for the support she received from her party guests, and the whole experience made her feel good and helped her understand why the corporal works of mercy are important.

"It helps a family that doesn’t get to get a lot of the stuff I do, like I get to go to the mall, I get to go shopping, and other people don’t. It’s important to feed the hungry and give drink to the thirsty and think about others," Julianna said.

Julianna said the experience has motivated her to continue looking for ways to help others. She’s also inspired by her mother, a registered nurse who works with mentally disabled individuals at the Ontario ARC and with patients on dialysis at Geneva General Hospital.

"I want to do what she’s doing and help people," Julianna said, noting that she’s already chosen an idea for next year’s birthday party. "Next year I want to do a book drive because a lot of people don’t have the money to go shopping and there are some kids that grow up without books. They grow up without reading, and reading is important because when you go to school you’re going to need to know how to read."

Julianna has a big heart and wants to make a difference in the world, and her parents have tried to nurture that desire, her mother said.

"We are very proud of what she did," Plate remarked.

A commitment to serving others is not the only thing Plate has in common with her daughter. Both Julianna and her mother recently made their first Communion during the Easter Vigil at Our Lady of Peace on March 26. Both had been baptized as infants but hadn’t received any of the other sacraments. Plate went through the parish’s Rite of Christian Initiation of Adults while Julianna worked with Walter Savaria, the parish’s religious-education coordinator, to prepare for the sacraments of penance and Eucharist.

As the Easter Vigil neared, Plate said the thought of sharing such a sacred moment with her daughter made her so happy she could cry, and Julianna expressed similar feelings.

"I think it will be good for us. We get a special bonding moment together," she said.