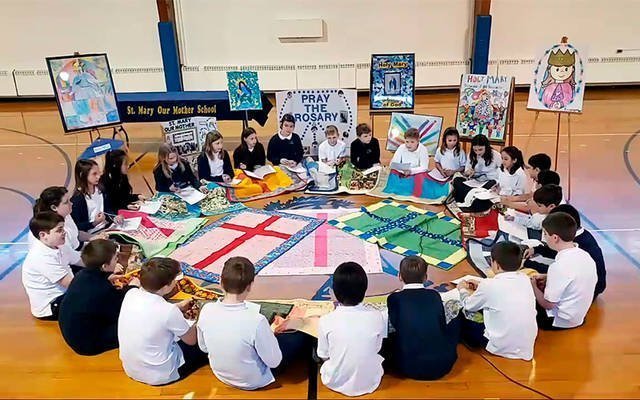 Last school year, the Diocese of Rochester found a space for all of the students from its 18 elementary and middle schools to gather to pray the rosary together.

Where is this accommodating venue?

Beginning in February 2019 and extending through the end of the school year, schools took turns livestreaming videos of their students praying the rosary aloud. Each Wednesday at 1:30 p.m. — except during school breaks — viewers who visited the Diocese of Rochester’s YouTube channel were able to watch the live feed and pray along with the students who were leading that week’s recitation of the rosary.

Those who were unable to watch the livestream in real time could access a recording on the YouTube channel anytime after the rosary had ended. In fact, that opportunity still exists for all: the schools’ videos remain available for viewing at http://bit.ly/2I9Ge1d.

“For total views, we have 4,600 and counting,” Jim Tauzel, interim diocesan superintendent of schools, noted in mid-September. Due to the initiative’s success, he said that “we are looking to continue working virtually to unite our schools in prayer” during the 2019-20 school year, likely kicking off another series of rosaries in October to honor the month of the rosary.

In 2018-19, each school had a slightly different take on the basic assignment. The March 20 live video from St. Mary Our Mother School in Horseheads, for example, showed students praying the rosary over quilts made through the school’s Prayers and Squares group, which creates quilts for people in the community who could use prayers. And, at St. Agnes School in Avon, students placed paper beads on a large rosary drawn on paper as the prayers were recited.

Teachers were able to pull up the YouTube channel on the smartboards in their classrooms, so their students were able to pray along even if their school was not the one leading the rosary that week, Tauzel said.

Tauzel, who traveled to most of the schools to livestream their prayers using his phone, said the atmosphere was always tranquil while praying.

“But when you hit the end button and tell the kids there have been 111 views already, they get really excited,” he said. “They can see they’re part of something bigger than themselves and their school.”

The students sometimes asked Tauzel if they could share the videos on their social media accounts or link to them on their YouTube channels. Many children and teens already have an online presence, he said, and digital interaction is something that’s become an important part of life in today’s society.

“It’s not something we hide from because it’s so integral to our society today. Rather than hiding from the technology we have, one thing schools can do is teach our kids how to use those tools for good,” Tauzel said. “If we’re going to use technology, we’ve got to learn it and build on it as a platform for sharing the faith.”