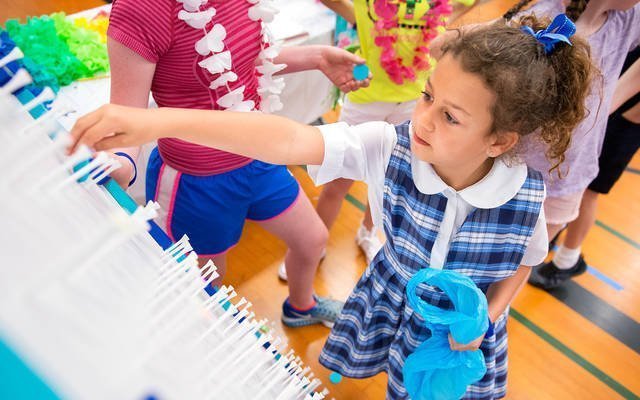 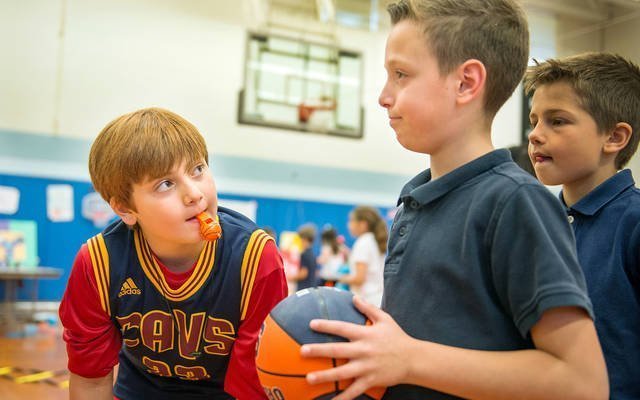 Ten-year-old Laine Anslui-Porpora (left) gets ready to play a game with 8-year-old Gian Luca (right) during the June 8 Mission Day at St. Louis School in Pittsford.

PITTSFORD — Over the course of two decades, a simple conversation in a school parking lot about ways to help Kenyan children has blossomed into a project that now benefits an entire community.

In 1998, while waiting for the afternoon buses at St. Louis School, then-principal Kathleen Carroll asked Father Protus Hamisi, then-assistant priest at St. Louis Church, how her school community could help his native village of Mautuma, Kenya. Knowing that education was the key to a better life for Mautuma’s children, the two came up with a plan for St. Louis students to establish and support a school in the Kenyan village.

Named after its sister school in Pittsford, St. Louis Saisi Primary School began in 1998 as a one-room, mud-floored schoolhouse. Carroll said the school was started on land purchased with money raised during a Mission Day at the Pittsford school, and the event became an annual fundraiser for the school’s Kenya project.

Carroll said students began attending the Kenyan school the following year, and by the time she and photographer Margaret Keller visited the school in 2001, there were 75 children in prekindergarten through first grade in attendance.

“It was quite an experience with the mud school and 75 children,” recalled Carroll, who retired as St. Louis’ principal in 2010. “They were so excited that these American ladies were coming over to support them.”

The 2001 trip was one of several visits Carroll would make to Kenya. With each trip, she said she would see the school grow with the contributions from the Pittsford students. New classrooms were built in 2009, and the school now has cement floors, a security gate, a library, running water, bathrooms and electricity, as well as a student body of more than 800 in prekindergarten through eighth grade. Carroll said the school also has a good reputation in the village and that students are meeting the high standards set by the school and the Kenyan government.

“To be going to the St. Louis School in Mautuma is quite an honor,” she added.

Carroll said the school not only benefits the students, but the village community as well. With the installation of a well, the students are able to bring back clean water to their families each day. Homes in the village also are connected to the school’s electricity, which “has drastically changed the lives of the residents and the children of Mautuma,” Father Hamisi said in an e-mail.

“Everyone benefits from the St. Louis School in Mautuma, it is just not the school (community) itself,” Carroll added.

Students at the Pittsford school continue to support their Kenyan peers. A book fair held in the fall usually raises about $800 to $900 to support the school’s library, Carroll said. She noted that the annual Mission Day remains the largest fundraiser, with this year’s event on June 8 raising more than $4,800.

On Mission Day, the school is transformed into a carnival of games designed by fourth- and fifth-grade students.

“It feels very good that we are able to do this,” Libby told the Catholic Courier June 8. “We had a lot of fun making this (our game), and now we are helping others.”

“We have been doing it (helping the Kenyan school) since we were in preschool and kindergarten,” Nora added about herself and her classmates.

The money raised during June’s Mission Day went toward the purchase of more than 100 uniforms for the Kenyan students and toward the building of a new classroom, which Carroll said will cost $8,000 to complete.

The school community in Kenya is very appreciative for all that St. Louis School in Pittsford has done for them over the years as well as their continued support, Father Hamisi noted.

“I take pride and great joy in the students, faculty, parents and all stakeholders of St. Louis Pittsford for making this (school project) happen,” he said.