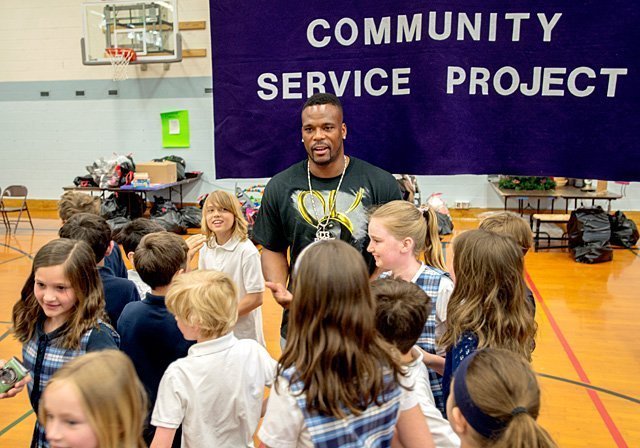 Buffalo Bills running back Fred Jackson visited St. Louis School in Pittsford to talk about community service May 15, the day students were working on their annual Heart and Home service project.

PITTSFORD — Sixth-grade students arrived at St. Louis School on May 15 excited about the prospect of sorting and packing thousands of donated items and delivering them to local charities.

Their excitement reached a fever pitch and spread throughout the school later that morning, when they learned Buffalo Bills running back Fred Jackson planned to visit their school that day to talk about the importance of community service.

Community service was an appropriate theme for Jackson’s talk, as May 15 marked the culmination of the school’s 21st-annual Heart and Home service project. Through this project, St. Louis students collect hundreds of donated items, which the school’s sixth-graders then pack and deliver to various local charities and agencies.

"It’s a really meaningful project, and the kids really enjoy it. It’s a very educational experience for them. Sometimes they don’t realize that there are people who live very different lives. The children are so proud to be able to help folks who are less fortunate," noted Margaret Murphy, the parent volunteer who coordinated this year’s project.

Preparation for the project begins months before the actual donations start rolling in, added Murphy, who spent quite a bit of time contacting various charities to see if they’d like to be beneficiaries of the project and, if so, what items they needed. She then put together a master wish list of these items and distributed this list to the school community. The 18 agencies benefitting from this year’s Heart and Home included Saint’s Place, Matthew’s Closet, Sojourner House, Birthright and Bethany House, and the items on the wish list ranged from afghans, alarm clocks and stuffed animals to wallets, watches and young-adult books.

During the months of April and May, St. Louis sixth-graders went into the classrooms of their younger schoolmates and gave them "pep talks" about the service project, Murphy said. Through these talks, the sixth-graders encouraged the younger students to team up with their parents and go on "treasure hunts" to see which of the items on the wish list were in their own homes and were no longer being used. They encouraged students to bring these under-utilized treasures to school May 14 and 15 and explained how the items would be used to help other children and families.

Sixth-grader Lucia Lanahan said she remembers bringing in items for Heart and Home when she was in the school’s younger grades, even though she didn’t fully understand the project’s importance.

"I didn’t really understand it then, but I knew I was helping someone," she recalled.

"By the time you’re in sixth grade, you know what it means," added fellow sixth-grader Tessa Hartzell. "It’s actually kind of fun, and it feels nice inside because you know you’re helping people. It’s a small thing, but it’s really helpful to families."

Sixth-grade students not only drum up support and donations for the project, but also sort those donated items according to each agency’s individual wish list before packing them up and delivering the items to the various charities. This gave them a new perspective on the project, noted sixth-grader Clare Adams. Many of this year’s sixth-graders have older siblings who have graduated from the school, and they’ve been waiting years for their turn to run the Heart and Home project and, in a way, leave their mark on the school community, added classmate Gracie Magguilli.

"It’s going to influence all the preschoolers and kindergartners who see us doing this," added fellow sixth-grader Elizabeth Anania.

Such positive role models can have a strong influence on young people, agreed the Bills’ Jackson, who told St. Louis students that his own keen interest in community service was sparked in part by professional athletes he looked up to when he was a child. Jackson grew up in Dallas, where his family sometimes was on the receiving end of others’ good works. He still remembers the day members of the Texas Rangers professional baseball team visited his school and encouraged students to give back to their communities if they ever found themselves in the position to do so.

"That’s something I took to heart and have always wanted to be a part of," Jackson explained. "You guys are light years ahead of where I was. To me, that’s awesome. I didn’t get started at such a young age."

There are many ways for today’s young people to become involved in their communities, and their teachers and parents usually have lots of good ideas to help kids get started, Jackson said.

"When you want to change what’s going on in the world, the first place to start is your own back yard or your own community," he said. "The more of an impact you can make on the world, the better."