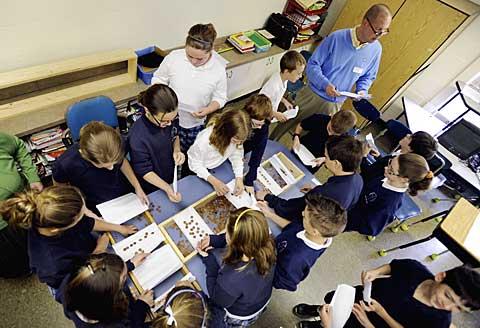 IBM systems engineer Jim Denzak (top right) supervises a group of fifth-graders as they work on constructing paper bridges May 14 at St. Louis School in Pittsford. The school hosted several engineers who oversaw problem-solving exercises in fifth- and sixth-grade classrooms.

PITTSFORD — The task seemed simple: Pick up a pen representing nuclear-waste contamination and drop it into a containment bucket in another area of the floor.

But when students in Peggy Martin’s fifth-grade class at St. Louis School attempted to use a limited number of commands to get a "robot" to perform the task, they soon learned there was nothing simple about writing step-by-step instructions.

Sometimes the "robot" — St. Louis School parent Chris Schaeffer — sat still because he didn’t get a command to stand up from his chair. A few times the "command compiler," IBM volunteer George Herbert, was unable to pass along any commands to Schaeffer since the commands he received were improperly written.

Other times, Schaeffer wound up in comical positions including walking bent over, standing with one hand raised or grasping at air instead of the pen that students hoped he would pick up.

"There’s a lesson here," Herbert told the students after one failure. "Was that what you expected?"

"This is so stressful," one student said, venting as her team headed back to the drawing board.

During Engineering Day May 14 at St. Louis School, students saved the city from nuclear waste, suspended a clip in water, created a bungee contraption to protect an egg and balanced as many pennies as possible on a bridge made of paper. The goal was to teach students problem solving — a skill they will use for the rest of their lives, said Leonor Rivera, a former engineer who is educational-technology coordinator at the school.

"The most useful thing of my engineering curriculum is learning to look at a problem not as a bad thing," said Rivera, who helped to organize the engineering day after the concept was suggested by an IBM employee whose children attend the school.

During one challenge, students had to craft a bridge out of a sheet of paper and test it to see how many pennies it would hold.

"We do trial and error to find out if our design works," said Jacqueline Napier, 10, who compared the process to solving a math problem.

Fifth-grade teacher Mary Diamond said it is difficult to carve out time to teach problem-solving skills, but she said her students could benefit from lessons in patience.

"This generation of children is so used to instant gratification," Diamond said.

During the 2009-10 school year, FIRST Lego League competitors had to define a transportation problem and then find a solution to it. One group from St. John Neumann proposed installing homework stations on school buses as a way to make travel time to and from school more efficient, while another group put together an educational program on healthy living to help people maintain the health of their circulatory system and prevent blood clots. In addition to tackling the transportation project, team members had to build a robot out of Lego blocks to navigate a transportation-themed obstacle course.

"The whole atmosphere is that you are at a sporting event," Sullivan said. "You are constantly cheering each other on."

She noted that a competitor’s creativity, not his or her academic level, is the most important thing in these problem-solving competitions.

"It’s a thinking process, and it gives them an opportunity to learn how to think," Sullivan said.

That also is the goal of Odyssey of the Mind, a competition that rewards creative solutions to open-ended problems. Last year, for instance, teams involving kindergarten through second-graders had to create a surprise party marking the occasion of something for which one wouldn’t normally get a surprise party. Participants had to give three gifts symbolizing the theme of the party, and the party had to incorporate a noisemaker with an unusual sound. One thing students could not use is any outside help from coaches, parents or others.

Last year, St. John Neumann fielded six Odyssey of the Mind teams, and all three of the school’s teams that competed in judged divisions placed during the regional competitions.