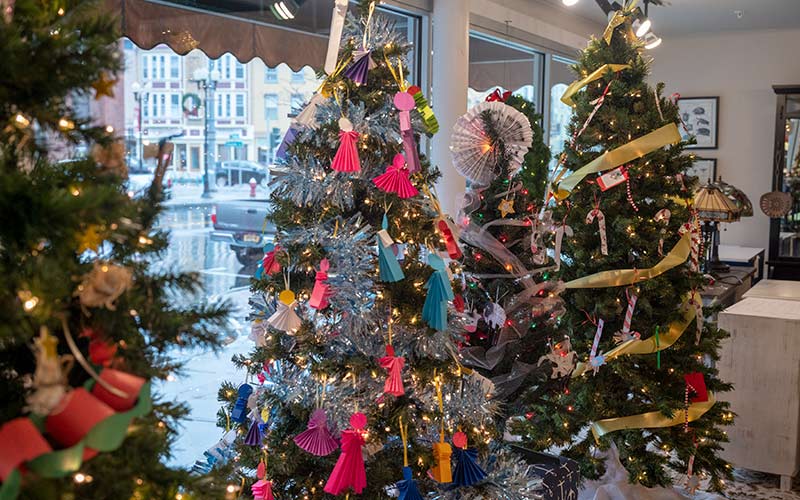 The Christmas trees adorning the windows of Lynch’s Furniture store in Geneva are more than mere window dressing.

They’re also signs of the community’s support for its local Catholic school and of the school’s engagement with the Geneva community.

Each of the artificial Christmas trees was decorated by a group of students from St. Francis-St. Stephen School, according to Suzanne Pohorence, principal of the Geneva school. The furniture store’s owner, Bernie Lynch, allowed the students to display the festive trees in his store and to place an empty box in front of each tree, Pohorence said.

“The idea was to have the students participate in a way to spread the Christmas message, advertise our school in the community, and raise a little money by having people go into Lynch’s and vote for their favorite tree with their spare change,” she explained. “The tree with the most monetary value will claim the Spirit of Christmas Award.”

Finding ways to increase St. Francis-St. Stephen School’s engagement with the broader Geneva community has been a priority for Pohorence since she became principal over the summer. The Christmas-tree project provided a way to highlight the school and raise some money while hopefully drawing customers into the furniture store, which is owned by a St. Francis-St. Stephen alum, Pohorence said.

The project also provided students with an opportunity to promote their own school and exercise their creativity, she added. In early November, the student body split up into several groups based on grade, and each group was responsible for coming up with a theme for its tree.

“The classes and teachers decided on their theme, and they did it within two weeks,” Pohorence said. “The teachers were intrigued by it. No one was concerned about finding time.”

Preschoolers and kindergartners decorated a tree inspired by the legend of the candy cane, which explains the religious symbolism of various characteristics of a candy cane. Students in the first and second grades decorated a tree centered around the star of Bethlehem, while students in the third and fourth grades drew their inspiration from a Christmas carol about the animals that may have been present in the stable for Christ’s birth. Another Christmas tune, “Hark! The Herald Angels Sing,” provided the theme for the angel-adorned tree decorated by the students in the fifth through eighth grades.

“The kids enjoyed taking time out to create something. They were having fun with it,” Pohorence remarked.

Students also enjoyed being able to take an active role in promoting their school and raising funds for it, she said.

“I felt their excitement. It’s their school. It’s important. They took ownership. It wasn’t doing something just because their teacher said to do it,” Pohorence said.

Voting for the best tree began in November, and although the boxes weren’t exactly overflowing with change by late December, Pohorence was not discouraged. Financial success was never the project’s main goal, she explained.

“Parishioners have noticed. People driving by have noticed. They’ve caught me at different events and let me know how beautiful it is,” she said. “We’ve reached a few people, and I think that matters the most.”

Tags: Catholic Schools, Ontario County News
Copyright © 2023 Rochester Catholic Press Association, Inc. All rights reserved. Linking is encouraged, but republishing or redistributing, including by framing or similar means, without the publisher's prior written permission is prohibited.