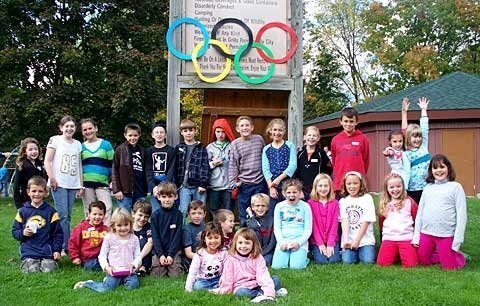 During a joint birthday party Oct. 3, 8-year-old Maren Hubler of Canandaigua and her 11-year-old brother Ryan asked their guests to forego buying gifts and instead purchase toys and games for Catholic Charities of the Finger Lakes and F.F. Thompson Hospital in Canandaigua.

Four students from local Catholic schools recently learned that giving can be at least as much fun as receiving.

Last December, while most of their peers probably were daydreaming about what they’d find under the tree Christmas morning, these students were delivering gifts to Catholic Charities of the Finger Lakes.

Hannah, Louis and Jacob Smith, who attend St. Francis-St. Stephen School in Geneva, collected gloves, hats and scarves for the agency through their first-annual Gloves for Love Campaign. Maren Hubler, a third-grader at St. Mary School in Canandaigua, invited guests at her October birthday party to forego buying gifts for her and instead to purchase toys and games for the agency.

Ellen Wayne, executive director of Catholic Charities of the Finger Lakes, said she was impressed by the students’ initiative and generosity.

"They all just kind of recognized that there is a responsibility, even at a young age, to kind of look out for people in need, and that was really great to see," Wayne said.

The seed for the Gloves for Love Campaign was planted in Colleen Richards’ fourth-grade classroom at St. Francis-St. Stephen.

"We were learning in school … that helping others is a kind thing to do," recalled Louis, 9.

At the dinner table that evening Louis and 11-year-old Hannah and 7-year-old Jacob decided they wanted to help people in their community. After a bit of brainstorming they decided to collect gloves and, after a family vote, the Gloves for Love Campaign was born, said the siblings’ mother, Anne Smith.

The Smiths, who belong to St. Mary Parish in Waterloo, decided to donate the gloves they collected to several different agencies, including Catholic Charities of the Finger Lakes. The children placed collection boxes at St. Mary as well as St. Patrick Parish in Seneca Falls and Our Lady of Peace Parish in Geneva. They also put a collection box at St. Francis-St. Stephen, where Hannah is in sixth grade and Jacob is in second grade. They even put Gloves for Love Campaign flyers in their neighbors’ mailboxes and placed a collection box on their own front porch.

When they’d finally emptied the collection boxes for the last time, the Smith children were excited to find they’d collected 232 pairs of gloves, more than 40 hats, and a few scarves.

"We exceeded our expectations. We would have been happy with 50," Anne Smith said.

"It was such a welcome gift for the families that were there. It was just unbelievable to see how thankful people were to get them," she said.

The campaign was a twofold learning experience for the Smith children, Anne Smith said. The children learned that many people in their own community are in need of such basic items as gloves, she said, and it also showed them that their community is generous and supportive.

"It makes me feel proud that we could help others," Louis added.

Eight-year-old Maren also has reason to be proud. She and her 11-year-old brother, Ryan, held a joint birthday party in October. Maren’s guests brought gifts for Catholic Charities of the Finger Lakes, while Ryan’s guests brought gifts for F.F. Thompson Hospital in Canandaigua. Maren did the same thing last year and said she’s just following the example Ryan set in 2007.

That year, Ryan asked people to skip his birthday gifts and instead help him raise enough money to buy a children’s wagon for Children’s Hospital in Boston. The family had recently spent time there when Maren and Ryan’s 9-month-old sister had severe breathing problems. On his next birthday Ryan collected gifts for Strong Memorial Hospital’s Golisano Children’s Hospital, and he’s been crossing items off F.F. Thompson Hospital’s wish list since 2008.

The Hubler children’s charitable birthday parties have become a beloved family tradition, and their aunts, uncles and grandparents look forward to manning game booths at the Olympic-themed bashes each year, said the children’s mother, Lisa Hubler. Maren and Ryan don’t seem to miss getting gifts from their friends, she added.

"I feel like other kids need them more. It makes me feel happy," Maren explained.

"They get stuff from our family, and the family support they get is what I think they really love," Lisa Hubler said. "They’ll remember these Olympic parties, and they’ll remember the feelings they got when they took everything to Catholic Charities or the hospital."

The board games, card games, toys and craft sets Maren’s party guests donated were given to families Catholic Charities of the Finger Lakes is working with or used to stock the agency’s supervised visitation rooms, Wayne said.

Not only did Maren and the Smith children set a wonderful example for their peers, but they also involved their classmates in their giving efforts, which is even more impressive, Wayne added.

"When people are exposed to giving at such a young age, they become adults who are concerned and compassionate and giving," she said.