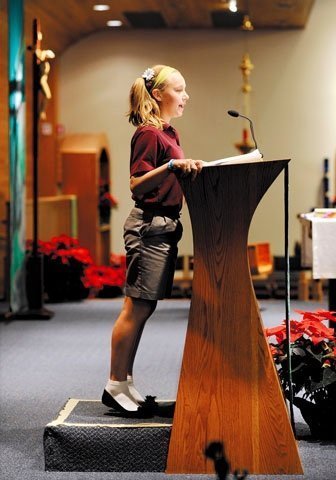 Hayley Izard, a fifth-grader at Christ the King School in Irondequoit, speaks during a prayer service Jan. 13.

Before she became educational-technology coordinator and music teacher at Corning’s All Saints Academy in 1994, Kathy Broderick spent 13 years as an investment and pension manager at Corning Inc. In this role she frequently had to give presentations for up to 200 employees at a time.

So when it comes to showing All Saints students how to speak in public, Broderick draws from a wealth of public-speaking experience.

"(Teachers) are hearing from big corporations that they need to train the kids," Broderick said.

At All Saints and elsewhere around the diocese, teachers have taken note, as they incorporate public speaking into lesson plans and extracurricular activities.

Training starts early, Broderick said, as kindergartners create computer presentations and then tell their classmates what they made.

"They get up there and use their voice to say what they did," Broderick said. "They don’t even know that they are making a presentation up there."

Broderick also incorporates presentation skills into music classes. While performing music, students hone other skills crucial for presentations: projection of their voices, awareness of body language and self-confidence, she said.

"They don’t want to look silly in front of their peers," Broderick noted.

Although the debate club Broderick started at the school several years ago is now inactive, she said it’s not due to lack of debate within the school. Classroom debates are almost a daily occurrence, and Broderick noted that teachers work with students on how to argue viewpoints respectfully. Students learn to look at the pros and cons of a situation, to weigh whether someone’s feelings will be hurt, and to consider whether a compromise is possible and advisable.

"Debate used to be such a big thing," she said, recalling how crowds would turn out to hear Abraham Lincoln debate. "But when we see a debate now, it’s an everyday occurrence."

Contestants in grades 5 to 8 vie for monetary prizes and the top eighth-grade student wins a $1,000 scholarship to attend DeSales High School, said Doreen DeSain, coordinator of the contest. DeSain is department chair of foreign languages at DeSales and teaches French and English at the school. Students are evaluated on criteria including speech organization, voice projection, language choices and poise.

DeSain said she tells her students that public speaking is a skill they need to master no matter what direction they take in life.

"I think once they get out of high school they think that they are never going to have to give a talk," she remarked.

She said she often reminds students not to lean on a podium, not to appear nervous, not to move around, not to make distracting gestures, and to look out at the audience or to look past the audience at various parts of the room if the audience makes the speaker nervous.

"I think that they have gotten better," DeSain said. "Each year they seem not to be nervous, whether they are nervous or not."

Carole Prymuszewski, who teaches art at Christ the King School in Irondequoit, St. Lawrence School in Greece and Holy Cross School in Charlotte, has another way to help students calm their nerves when speaking in front of their peers: She suggests they try pretending they are someone else.

"If they ever have a chance to take an acting class, it really helps them get over that fear and get confidence in themselves," she said.

Prymuszewski recently started drama clubs at Christ the King and St. Lawrence. Although each club has only a few students, she said she has been able to work with the students on improvisational exercises and basic acting skills to help them feel confident expressing themselves in public.

It’s common for students to speak too quietly or read too quickly, yet Prymuszewski said students can learn to project confidence.

"I always tell kids I was a really shy person when I was young," she said.