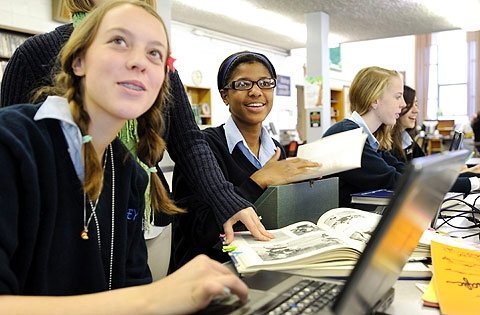 Bishop Kearney juniors Courtney Wallace (left) and Aimee Thomas are part of a group of students working on a 50th-anniversary commemorative edition of the school's yearbook.

IRONDEQUOIT — In a room lined with shelves tucked in a corner of the Bishop Kearney High School library, a handful of students flipped through old yearbooks, copies of school newspapers, photos and papers from the school archives.

The students have spent their free periods compiling what the Bishop Kearney experience was like for students throughout the decades.

The project, which coincides with the 50th anniversary of the school’s opening, is one way to get the students of today to connect with those of days gone by, said Nancy Ryan, director of alumni relations and the annual fund.

"This is totally extra, and they have been in every single day," said English teacher Mary Slifer, who is one of the faculty members overseeing the project, along with her daughter, Eileen Kinley, who teaches art at the school.

The hardcover, 110-page history yearbook will be given to those who attend a 50th-anniversary gala at 6 p.m. Sept. 21 at Locust Hill Country Club. Tickets to the gala are $100 per person. Additional yearbooks also will be available for purchase after the gala.

There also will be an anniversary Mass at 2 p.m. Sept. 23 at Sacred Heart Cathedral, 296 Flower City Park, Rochester; an on-campus cookout called Kearney-Palooza! with live music and kids’ activities from noon to 3 p.m. Aug. 18; an alumni golf scholarship tournament at Monroe Golf Club July 16; and a time capsule burial Sept. 20.

When Bishop Kearney High School opened in 1962, it cost $2.5 million to build and was known as the "Louis and Clark" expedition — led by Irish Christian Brother Joseph M. Clark and School Sister of Notre Dame M. Louis Whalen. It was dedicated April 28, 1963, and school officials said they believe it was the first school in the nation to be named after a living bishop: James E. Kearney, the fifth bishop of Rochester.

The school, which used to be coinstitutional with separate classes for boys and girls, was built and opened at the same time as Cardinal Mooney High School in Greece, and the two schools were spirited rivals until Mooney closed in 1989.

When the first class of Bishop Kearney Kings arrived at the school, they found it literally was still being constructed around them, said Class of 1966 pioneer Sharon Williams Tucker of Methuen, Mass. The cafeteria, gym and auditorium were unfinished when the first students arrived, but were operational within a few weeks, she said.

Tucker said just before the school opened, her father told her to distinguish herself at the new school.

"He said, ‘I want you to remember one thing: I invested a lot in this school, so do well,’" said Tucker, who noted that the annual tuition for the school was $225.

She said some of the students had a harder time adjusting to the requirements of the school’s uniforms. Girls’ $45 uniforms included skirts that had to fall 2 inches below the knee, and they had to wear black, sensible shoes, she said.

"Some of the girls had a lot of teased hair and a lot of makeup, and that was quickly unteased and wiped off," Tucker recalled.

The first class of Bishop Kearney Kings helped establish many traditions, she said.

"Everything we did was a tradition — every mark that we made," Tucker said.

Although the school was new, its athletic teams and marching band quickly garnered name recognition for Bishop Kearney. For instance, in 1967, the school band began to travel widely, leading the St. Patrick’s Day parade in New York City for two years. In 1969, the band traveled to Dublin to lead the St. Patrick’s Day parade as well as performing to a standing crowd at halftime of the national finals of a hurling competition, which news reports described as Gaelic football. On that trip they made several appearances on Irish national television, and they received a congratulatory telegram from President Richard Nixon. The band returned to Ireland and Europe multiple times, and members of the band also performed for dignitaries including Pope Paul VI.

Junior Aimee Thomas, 16, of Webster, who researched the 1970s for the history book, said the clothes of that decade stood out.

"At one point, boys were wearing plaid pants, which was interesting," she said.

Sophomore Giuliana Pietrantoni, 16, of Greece, who researched the 1980s, noted that the school started a television station during that decade and had a Dungeons and Dragons Club, and many of the students had "big hair."

Junior Marisa Rotolo, 16, of Webster, who is charged with compiling a history of the school and what has been important for students in the 2010s, said the latter task has been a challenge.

"It’s hard to go through what the whole school collectively would think is important," Marisa said.

Yet some events do stand out, including when an alumna logged stratospheric accomplishments. The school tuned in to watch Astronaut Pam Melroy, Class of 1979 and a retired Air Force colonel, pilot missions to space in 2000 and 2002, and command the space shuttle Discovery in 2007. Several student journalists in 2007 traveled to Florida to cover her trip to space.

Closer to home, in 2009, the boy’s basketball team made news when it brought home the school’s first-ever state title for class B boys basketball.

Additionally, the school, which the Irish Christian Brothers sold to a lay board of trustees in July 1999, has recently been expanding its grade-level offerings. It added seventh and eighth grades in 2008 and will add a sixth grade in September.

The school building also has given life to other schools, including the diocesan-run Northeast Junior High School, also known as Bishop Hogan Academy, from 1990 to 2004, and the Discovery School, a local charter elementary school that opened in 2011. Derech HaTorah of Rochester, a kindergarten to grade 8 elementary school for Jewish children, opened in the building in 2004.

EDITOR’S NOTE: Alumni may submit photos and memories to be considered for inclusion in the history book until May 31. Guidelines are at www.bkhs.org, and photos can be e-mailed to mwazowicz@bkhs.org. For details, call 585-342-4000.