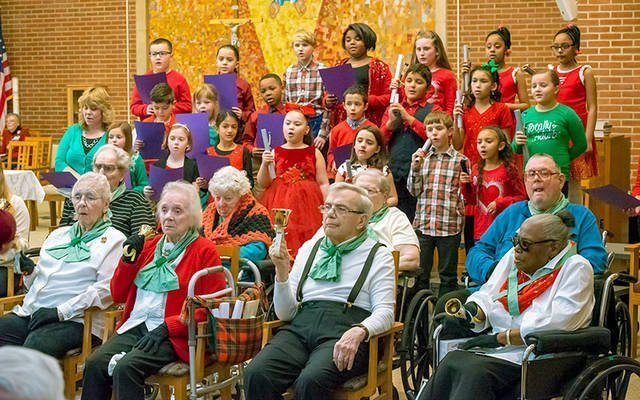 However far apart people might be in age, they can make beautiful music together.

Take, for example, the bell choir that performed Dec. 9 at St. Ann’s Home in Rochester for a Christmas Mass with Bishop Salvatore R. Matano. Making up that group were St. Ann’s residents along with students from Rochester’s St. John Neumann School, all of whom had established friendly ties during rehearsals in prior weeks.

The bell choir was part of an ongoing connection between the school and the nursing facility. Young people from St. John Neumann also have visited St. Ann’s in recent months to engage in such events as book reading, game days and pumpkin-carving with their elder friends.

“It kind of makes a bond between older people and younger people,” said Ella Coughlin, 8, a St. John Neumann second-grader and bell-choir member.

Several other Catholic schools in the diocese also make special efforts to bring the generations together. At St. Michael School in Penn Yan, a cherished Catholic Schools Week tradition took place Feb. 2 with the celebration of Grandparent’s Day. On that Friday, grandparents attended a school Mass and then visited classrooms to share lunch and play games with their grandchildren.

In late January, Bob and Rita Creary were looking forward to their fifth Grandparent’s Day at St. Michael where they have two grandchildren — second-grader Ryan Creary and his sister, Emily, a kindergartner — currently enrolled.

“They’ll say, ‘Are you coming, are you coming?’ Of course we’re coming,” Rita said with a laugh.

Her husband added that the school community itself is like a family, and so he feels right at home on Grandparent’s Day.

“You just feel good when you’re in there,” Bob remarked. Both he and Rita also noted that they enjoy the special treatment they get from students, such as having doors held open for them.

Another diocesan school with a focus on older folks is St. Mary Our Mother in Horseheads. On Jan. 31, as part of Catholic Schools Week, fourth-graders visited an assisted-living facility to bring rosaries they had made for residents, and also to recite the rosary with them. And, just before Christmas, fifth- and sixth-grade students maintained their annual tradition of performing Christmas songs at a nursing facility. One more yearly highlight is the school’s May Crowning, to which grandparents are invited and given a reception afterward.

Jean Yorio, St. Mary Our Mother’s principal, acknowledged the emphasis that her school places on connecting with senior citizens, saying, “That’s our role. It’s a part of our role in the community.”

Yorio added that students are made aware of how vital these efforts are. Using the holiday visits as an example, she said, “We talk about how this is an opportunity to give something to these folks that they don’t have normally.”

Valencia, 7, observed that residents always appear happy when she visits St. Ann’s Home. Asked why that might be, the second-grader replied, “Because people are with them.”

Sage, 9, a fourth-grader, agreed that “I think they feel kind of happy and excited to see us,” adding that she feels good about her presence being so well received.

“You can make them happy,” Sage said.