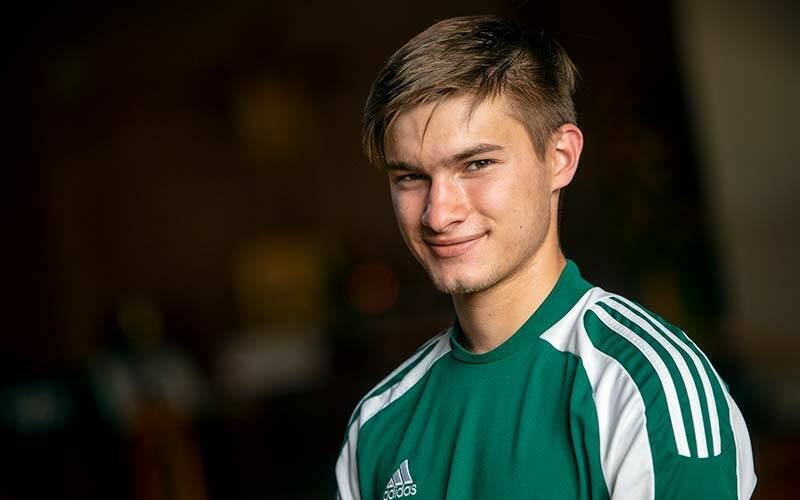 My parents aren’t here to make sure I go to Mass. Will I?

I’m not used to attending Mass somewhere new, by myself. Can I adjust?

It’s challenging to practice the faith with my busy academic and social life. How can I fit everything in?

Young-adult Catholics might well ponder such questions when heading off to college and transitioning to new routines, challenges and opportunities. Will the Catholic faith remain a priority amid so many adjustments?

“It’s definitely possible if you’re passionate about it. The faith will travel with you,” asserted Ben Tantalo, a parishioner at Greece’s St. Mark Parish who was involved in its youth and music ministries.

This fall, Tantalo is beginning his sophomore year at Saint Vincent College in Latrobe, Pa. The college had stood out in his college explorations because it featured such faith-related, on-campus offerings as confession, adoration, Bible study and daily Mass.

“There are so many Catholic opportunities,” said Tantalo, who has engaged in many of these opportunities while pursuing a dual major in finance and accounting.

Yet only a small percentage of colleges and universities have the strong Catholic presence of Saint Vincent College, which is operated by Benedictine monks. Of the 19 area colleges listed on the Diocese of Rochester’s campus ministry website, for example, fewer than half are staffed with an on-campus priest or Catholic lay director. At the majority of area schools, the pastor of the nearest parish is the contact person listed.

“I think it’s important for people to consider this before they arrive at a campus,” said Kilbridge, who oversees campus ministry in her role as associate diocesan director of pastoral services. She said incoming freshmen can check out Catholic opportunities during orientation and on campus websites, adding that she’s happy to assist anyone who needs help connecting with some form of campus ministry. She can be reached at shannon.loughlin@dor.org.

If there’s no Catholic ministry such as Newman Club active on campus, she said students “interested in connecting with others on their faith journey” should consider creating their own Catholic fellowship group. However college students go about practicing their faith, it’s always good to invite their peers to join in, she added.

Some students initially might not embrace the idea of maintaining their Catholic connection, Kilbridge acknowledged, noting that “college is a natural time for questioning” and “people are at different places on their faith journey.” On the other hand, she said that many college students actually find their faith strengthened by openly discussing and practicing their beliefs with like-minded young people. College can even be a site for young adults joining the Catholic faith; Kilbridge noted that the Cornell Catholic Community, for example, has “a very robust” Rite of Christian Initiation of Adults program.

During an April 24 online discussion with youths from the northern Tompkins County parishes, four Cornell students noted that their Catholic faith actually has intensified in college. They said that they quickly developed friendships within the Catholic campus community and that the resulting sense of belonging spurred them to explore the faith in greater depth.

One member of the Cornell contingent, Elizabeth Fitzgerald, observed that parents can influence church involvement during childhood and adolescence — but that once a student arrives on campus “it really is up to you.”

Her small group acknowledged that some might initially decline to get involved in campus ministry, either due to lack of interest or feeling they don’t have the time. But the Cornell students emphasized that no matter how busy young adults become, church involvement is much more of a comfort than a burden.

“Every time I go to Mass, I feel better than how I did going in,” Sami Peter said. “It kind of grounds me, brings me back to reality. I’ll be freaking out about all these assignments I have to do, then I go to Mass — and, you know, that’s what really matters.”