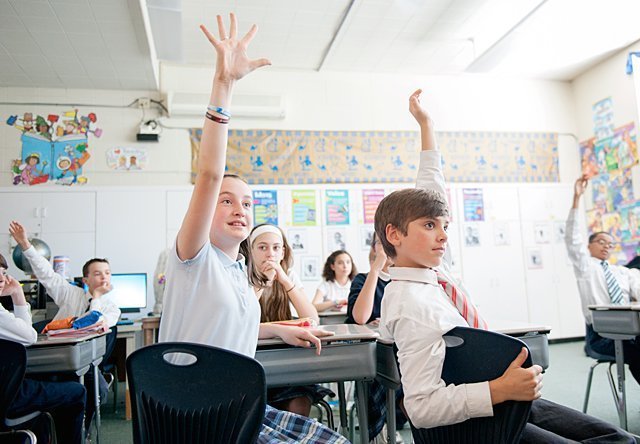 BRIGHTON — When Jacki Schuman asked her sixth-grade students at Seton Catholic School to read A Long Walk To Water last school year, she didn’t realize the assignment would become a catalyst that for helping them answer Pope Francis’ call to extend God’s mercy to others.

Written by Rochester author Linda Sue Parks, the short novel is based on the true story of Salva Dut, a native of South Sudan who as a teenager led 1,500 "Lost Boys" displaced by violence across the desert to a refugee camp in Kenya. A Long Walk To Water chronicles the daily hardships faced by a fictional 11-year-old Sudanese girl who spends eight hours each day fetching water for her family, and the hardships Dut faced on his journey to Kenya.

"When we read (A Long Walk to Water) we felt very sad for Salva and we wanted to do something to help," recalled Seton sixth-grader Lexie Bird.

After learning that Dut eventually relocated to Rochester and founded Water for South Sudan, a nonprofit organization that raises funds to drill wells and provide clean water for the people of South Sudan, Schuman’s students were moved to take action. Their desire intensified when they learned that Pope Francis had kicked off a Year of Mercy in December 2015, calling Catholics to carry out the corporal works of mercy. Since giving drink to the thirsty is one of these works of mercy, the students connected the pope’s request with their desire to help children in South Sudan, Schuman said.

"They felt led to do something, especially with the pope’s Year of Mercy, and they decided to establish a fundraising campaign," she added.

The sixth-graders decided to collect deposits from recyclable beverage cans and bottles, and enlisted their fellow Seton students in the effort. The sixth-graders prepared presentations about their fundraising plans and the need for clean water in South Sudan, then delivered those presentations in each of the school’s classrooms. Seton’s students, faculty, staff and parents responded enthusiastically, and the school raised $1,342 for efforts by Water for South Sudan to provide fresh water in the African nation.

The water project at Seton is just one example of the ways in which Catholic schools throughout the Diocese of Rochester encouraged students throughout the 2015-16 school year to carry out the corporal works of mercy: To feed the hungry, give drink to the thirsty, clothe the naked, shelter the homeless, visit the sick, visit the imprisoned and bury the dead.

Students at St. Kateri School in Irondequoit helped feed the hungry by collecting cans of soup and donating them to the Irondequoit Community Cupboard and St. Andrew’s Food Cupboard in Rochester, according to fifth-grade teacher Debbie Eveland.

Students at St. Mary School in Canandaigua, meanwhile, cared for the sick in February by making Valentine’s Day cards for patients at Canandaigua’s VA Hospital and presented a Hunger Banquet in April to highlight the plight of poor and hungry people throughout the world, according to Jean Mercandetti, coordinator of the school’s middle-school house program.

Recognizing that good deeds are not limited to the seven areas covered by the corporal works of mercy, students in Don Eckerson’s fifth- and sixth-grade classes at Ithaca’s Immaculate Conception School collected gently used baseball equipment and donated it to needy children in Puerto Rico through Roberto’s Kids, a nonprofit organization founded by the late baseball player Roberto Clemente.

"What we’re trying to focus on there is taking care of our brothers and sisters around the globe," Eckerson explained.

Such activities provide students with a chance to act on and better understand the moral principles they discuss in their classrooms, Eveland said. What’s more, children typically enjoy the service projects, she noted.

"I think that any child wants to do good things for those around them," she said. "It’s just a part of who they are, and by providing them the opportunity, it just gives them a chance to act on their own inclinations to help other people."

Although the Year of Mercy may have inspired schools to emphasize the corporal works of mercy in recent months, Catholic educators have encouraged their students to care for their neighbors ever since the earliest days of Catholic schools, Mercandetti noted.

"We believe that it is important to embrace our faith through living it in our daily lives," she said.

When Catholic schools plan service activities, the goal is not simply for students to do good deeds, but to connect those deeds with what they’re learning about their faith, agreed Bob DiFulio, Latin teacher at Siena Catholic Academy in Brighton.

DiFulio previously taught religion at both Siena and Bishop Hogan Academy in Irondequoit. Although religion is no longer his main area of instruction, he still finds a way to work it into every lesson.

"In almost every class I leave at least five to eight minutes at the end, and I zero in on something that is related to our faith, and I also tie it, if possible, to current events," DiFulio explained.

After the terror attack at an Orlando nightclub in June, for example, DiFulio and his students discussed the attack and Christians’ call to reject violence. DiFulio, who helped found the Cathedral Community’s Joseph’s Place food cupboard in Rochester, also frequently talks to his students about the challenges facing the people who come to the food cupboard for assistance.

"(Students are) so sheltered from these realities, and that’s why I think it’s so important that we give them concrete opportunities (for service), so they can witness it firsthand," he said.

DiFulio said his stories about the food cupboard’s clients, coupled with service opportunities and visits to such facilities as Rochester’s Open Door Mission, have been eye-opening for Siena’s students. Once students understand the needs faced by others in the community, they can start to live out the principles they learn in religion classes. They also come to understand that prayer and good works go hand in hand, he added.

"There’s a danger to only being absorbed in prayer and then not bringing the fruits of our prayer to bear on our daily lives, and there’s an equal danger in being out there and doing all these good deeds and then forgetting about the source and the substance of why we do what we do," DiFulio said, citing, in particular, the importance of attending Mass. "We need that. That’s where we meet Jesus and he teaches us what we need to do, and then we have to go follow him, because he’s walking out the door into the street. He’s saying, ‘Come follow me now. Let’s do the work we need to do.’"

Catholic-school teachers do their best to encourage students to follow Jesus’ example and serve their neighbors, but parents also need to reinforce this message at home, he added.

"It’s wonderful if your parish has a food pantry or a clothing closet, to get involved as a family and reinforce it (serving neighbors) and talk about it," DiFulio said.