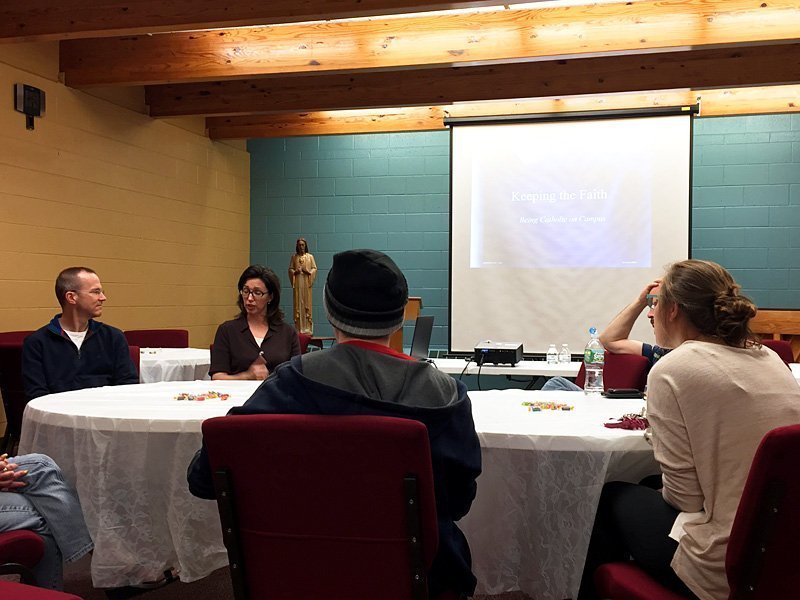 Shannon Loughlin (back) leads a June 12 discussion with high-school seniors, college students and parents about how to keep the faith while in college.

The 2016 graduate of Corning-Painted Post High School was involved with the youth group and the youth minister council at All Saints Parish in Corning and said she hopes to get involved with the Center for Spirituality at Nazareth when she arrives on campus later this month.

"They have a Catholic Club and they offer Mass every Sunday," she noted. "I’m looking forward to being a part of it and making it my weekly routine to attend club meetings, Mass and stay involved."

Fellow high-school graduate Noah Flynn has been involved in youth group since he was in sixth grade. He will be a freshman at Rochester Institute of Technology later this month where he will study industrial design. While he admits he chose RIT mostly because of his major, Noah said he did like seeing the Mass times posted outside the college’s Newman Center when he visited the campus for the first time.

"When I saw this (Mass times), that eased me a bit and I felt more comfortable with the place," Noah said.

Despite their differing post-graduation plans, both Bridget and Noah spent the evening of June 12 at Painted Post’s Immaculate Heart of Mary Church, where they learned about potential challenges to maintaining their faith while in college. They attended a free presentation titled "Keeping the Faith," which was led by Shannon Loughlin, who has been involved with campus ministry in the diocese for more than 13 years. The event was organized by All Saints Parish’s youth minister, Loretta Beale.

Sitting in a circle with the high-school students attendance, Loughlin listed three questions that Catholic students may asked by fellow students or faculty members, no matter the school they plan to attend:

Such questions, Loughlin explained, can be shocking to Catholic students, especially if they are asked in a classroom setting by professors or faculty members who have control of their grades or their future.

"These are challenging questions as they are, and if they were the only things that you had to encounter as you go to school, it would probably be enough to work through," Loughlin said, noting other challenging aspects of college, such as dealing with roommates, making major life decisions and managing time.

"A lot of people, especially the first year (of college), step away from it because it seems easy to do," she said of students practicing their faith.

In addition to being questioned about faith by others, Loughlin said college also is a natural time for students to question their own faith. Exploring other faiths and seeing what other people think about God can be amazing and interesting for students, she said, but it also can be challenging for those who are trying to sort out what faith means to them.

"The faith that we grew up with is really the faith of our childhood, and college is a time for you to make it your own," Loughlin told the students.

Noah and Bridget said they are ready for the challenges that come with college, including the challenge of maintaining their faith.

"Church gives me direction in my life and calms me down. I definitely want to keep doing that and stay connected," Noah said.

"I have a strong faith, and I think that it will stay that way throughout college," Bridget added.