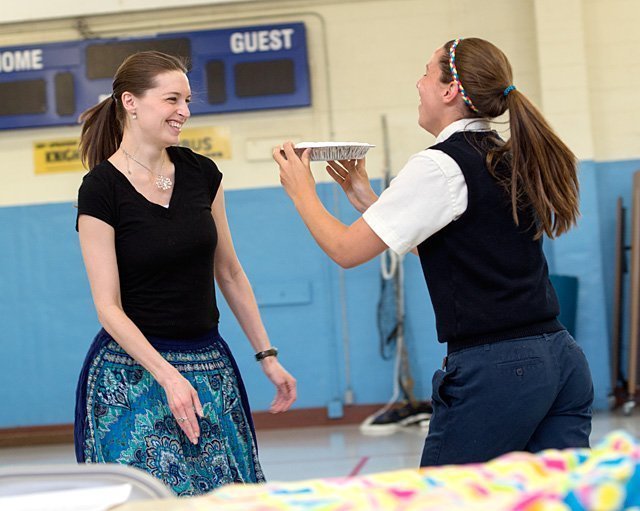 St. Mary School 3rd grade teacher Sarah Baker takes a pie to the face as a reward to the student body for raising $1,155 for the Canandaigua Comfort Care Home.

CANANDAIGUA — It’s not every day that someone takes a pie in the face in order to promote awareness of the dignity of human life, yet third-grade teacher Sarah Baker did just that during a recent assembly at St. Mary School.

Three other teachers, danced, sang and cheered, and an eighth-grade student let a fellow student dump a bucket of ice water over her head.

These performances were meant to be a reward for St. Mary students, who raised $1,155.18 for the Canandaigua Comfort Care Home, which is expected to open in early summer. The fundraiser was held in conjunction with the middle-school students’ Lenten project, which promoted awareness of the dignity of life from conception until natural death. The idea for the Lenten project was born at a meeting of the eighth-grade leaders of the school’s five houses, or groups, according to eighth-grader Emma Daino.

During the spring of 2014 St. Mary students had raised $700 for Daystar for Medically Fragile Children by collecting loose change in jars, and the house leaders decided they wanted to hold a similar "jar wars" fundraiser this year, but with a different beneficiary. They chose to help the Canandaigua Comfort Care Home because they felt strongly about showing support for people at the end of their lives. Many of them had experienced the loss of an elderly relative, Emma said, noting that her grandfather spent his final days in a facility similar to the Canandaigua Comfort Care home.

Suzanne Underhill, executive director of the Canandaigua home, visited the school in early March to explain the concept of comfort care to the students and reassure them that death is a part of life and not something to fear, said Jean Mercandetti, coordinator of the middle-school houses and academic intervention services teacher at St. Mary. And the sixth-, seventh- and eighth-graders in each of the five houses put together presentations on the various stages of human life, which for the purposes of this project included fetal development, birth, childhood, adulthood and death, Mercandetti said. The seven or eight students in each house split into smaller groups to develop different presentations for students in different grades.

"The little kids got a different presentation than the bigger kids. They were age appropriate," Mercandetti explained. "It was very well done. Throughout the stages we also wanted to convey the Catholic concept of the value of life."

Eighth-grader Claire Keck said her house was tasked with talking to the younger students about the importance of each human life even before birth, and they incorporated the Dr. Seuss book Horton Hears a Who! which emphasizes the fact that, "A person’s a person, no matter how small."

"I went into first grade and talked. I didn’t think they’d quite get the message, but I was surprised. They actually understood it and got what was important about it," Claire said.

Emma said students seemed to be able to relate to her house’s presentations about birth, probably because many of them can remember the births of younger siblings, and eighth-grader Tristan Gellatly said students identified with his house’s talks about childhood as well.

"We talked about work and play and the importance of both of them," he said.

"They related to how important their stage in life is, what they’re doing now here in school and playing outside and just being a kid," added fellow eighth-grader Mara Jankowski.

These presentations helped students understand why they were raising money for the comfort care home, Claire said.

The April 13 performances were a part of the project from the very beginning, when the house leaders picked five performances they thought students would like to see. Mara volunteered to have a bucket of ice water dumped over her head, and Baker agreed to take a pie in the face. Students also asked Mercandetti to sing Katy Perry’s "Firework." They also asked middle-school English teacher Katrina Palleschi, an avid Los Angeles Angels fan, to lead a cheer for the Yankees; and music teacher Karen Snyder to dance to Beyonce’s "Single Ladies (Put a Ring On It)."

The house leaders designated specific jars for each of the performances, and students could vote for performances they wanted to see by placing their money in the appropriate jars. Students responded enthusiastically, and since they handily surpassed their original goal of $800, all of the performers agreed to put on their acts during the April 13 assembly. Before they took the stage, however, a pair of students presented a ceremonial check to Underhill and Mary Kay Naioti, volunteer coordinator for the Canandaigua Comfort Care Home.

The students’ donation will help the facility be a valuable resource to the community, especially those who are unable to stay in their own homes in their last days, Underhill said.

"I’m hoping that we will be a very valuable resource," Underhill said. "We are building a family of volunteers that is going to be able to be family to many residents and their loved ones."